For over seven years, there is no quarter of the month for us not to describe the next premiere of some new company that hopes to enter this sector of the market and succeed in manufacturing and selling its 3D printers. Unfortunately, quantity does not necessarily go hand in hand with quality – the vast majority of new products duplicate the same patterns and solutions, differing from each other with little insignificant trifles. The majority of 3D printers printing from thermoplastics in FDM technology, whose creators draw handfuls on the achievements of their predecessors. Of course, there are exceptions, such as Carbon, Desktop Metal or XJet, which we have repeatedly described, but in the end all the rest is still based on the same ideas.

Low-budget 3D printing arrived on the market thanks to Dr. Adrian Bowyer, who in the mid-00s developed the concept of a self-replicating 3D printer called RepRap. In this way he started a real revolution in the field of new methods of producing things, which continues to this day. His original design has evolved quite strongly and today’s top 3D printers at first glance do not resemble his original design. In 2010 – 2013, several groundbreaking desktop 3D printer projects appeared on the market, which set new trends and development directions for the entire market.

Cupcake is the first commercial low-budget 3D printer that has ever appeared on sale. Developed by MakerBot Industries – one of the first companies producing this type of device in the world, at its premiere in April 2009, turned upside down the entire world order in force in the 3D printing industry. The Cupcake CNC had a tiny 10 x 10 x 13 cm work area, a wooden plywood case and a great tangle of cables all around, but it only cost $ 750, while the “competitive” uPrint Personal Printer from Stratasys – $ 14,900.

Although today it is difficult to consider Cupcake differently in terms of historical curiosity (his successor – Thing-O-Matic was already a much more functional device), the career of MakerBot – one of the most important companies in the history of the 3D printing industry and all its successors – began with him.

When in 2013 we were presented Lepafrog’s 3D printers for the first time, it was an absolutely new quality compared to what was on the market at the time. The massive, white construction in a beautiful style, presented against the background of other 3D printers like Apple products. The device had a working area of 20 x 27 x 23 cm and one or two printheads included.

The Dutch Leapfrog has never achieved such success as its rival from abroad – Ultimaker, however, it still remains among the most popular European manufacturers of 3D printers. His debut device – Creatr, set new standards in the design of this type of device. 3D printers no longer just had to print – they also had to look good…

Replicator is the third design by MakerBot, and also the last, which was based on a wooden structure and open source. Presented in January 2012, the Replicator was a harbinger of new quality in the design of desktop 3D printers.

Up! Plus and its successors – Up! Plus 2 and Up! Mini, are probably the most underrated desktop 3D printer in the history of the 3D printing industry. Although most people know them perfectly, hardly anyone is really aware of how revolutionary these devices were for the development of this market segment? Up! ‘S were the first consumer 3D printers in the world that this term was never exaggerated.

Debuting in 2012 Up! Plus it was small and inconspicuous. Its working area was only 14 cm in each axis, and the construction was difficult to call impressive. However, it had something that no other 3D printer had at that time – automatic calibration of the work table and really simple and trivial to use, proprietary software. Its manufacturer – Chinese TierTime, boasted that the 3D printer can be started up to 15 minutes out of the box. He wasn’t lying … Up! 3D printers were so perfect in this respect that a year after their premiere, 3D Systems presented their clones in the form of Cube, on which they based their infamous strategy “3D printer in every home“.

Zortrax is without a doubt the largest and most awarded Polish company in the 3D printing industry. The source of his success is the M200 – currently one of the most popular desktop 3D printers on the market. How was this achieved? Zortrax has started where Up! Plus it stopped – it based its 3D printer on a solid, metal and stylish design with a large working area, combining it with intuitive, proprietary software, automatic leveling of the work table and its own filament line.

The result was the first desktop 3D printer, which quality of printouts, repeatability and simplicity of operation was comparable to Stratasysa high-budget 3D printers. Zortrax M200 since 2014 has been successively winning further industry awards around the world in qualitative and functional categories.

Until 2012, all desktop 3D printers printed from FDM thermoplastics. In May that year B9 Creator debuted on Kickstarter – 3D printer for self-assembly printing with light-cured resins in DLP technology. Despite the considerable success and raising over half a million dollars, it never broke into the mainstream, remaining the domain of hobbyists and amateurs. It wasn’t until a year later that the low-budget 3D printing industry entered the segment of photopolymer technologies with impetus thanks to Formlabs and the first truly desktop 3D printer of this type – The Form 1.

It was a real sensation and revolution. SLA technology, until now exclusively reserved for big players in the form of 3D Systems, has entered homes and small businesses, thanks to a small and easy-to-use device that has taken low-cost 3D printing to a whole new level. Today, Formlabs is one of the leaders in the global 3D printing market, and its design has inspired dozens of other companies to work on the development of SLA and DLP technology in a low-budget edition.

The Dutch Ultimaker is one of the precursors of the low-budget 3D printing industry, present on the market since 2011. Its proprietary design – Ultimaker Original, has set a new direction in the field of designing desktop 3D printers, becoming one of the most-copied constructions in history. Almost from the very beginning of its existence, the company has also been developing one of the most popular, free slicers for desktop 3D printers – CURA.

MakerBot Replicator 2 is a 3D printer that eventually transformed a dynamically developing start-up into a serious production company, and its leader – Bre Pettis, made for a (short) time the face and icon of the emerging industry. The device appeared on the market in September 2012 – just over half a year after its wooden original. Replicator 2 was the first professional-looking desktop 3D printer equipped with a relatively large work area and one or two printheads.

A few months after the premiere, in May 2013, MakerBot Industries became part of Stratasys, who preferred not to risk it or wait for Replicator 2 to seriously threaten its product line. The quality of the solutions used in them was so high that 3D printers still successfully operate in countless service and production companies around the world, and its successors – 5th generation Replicators have never managed to achieve the same level of respect and worship what making 2012 constructions.

Darwin is the name of RepRap 1.0 – the first low-budget 3D printer created in the world, whose creator was Dr. Adrian Bowyer mentioned in the introduction. Although today the 3D printer looks quite primitive and harsh, it was this device that started the entire revolution to which we are the beneficiaries today. Without Darwin, there would be nothing – MakerBot, Ultimaker, Up!, Zortrax, or even The Form 1, which was created as an alternative to the whole mass of desktop 3D printers printing from thermoplasticPrusa i3.

If someone would ever want to develop a logo for the low-budget 3D printing sector, they would certainly base it on Prusa i3 – the most popular and most often copied design of 3D printers in history. The project created in 2010 by a young Czech – Josef Průša, was really only a modified and simplified version of Mendel – the second RepRap design by Adrian Bowyer. The project, however, enjoyed so much popularity that it soon replaced its original, and Průša himself continued work on the further development of the structure.

The result was her two subsequent iterations – Prusa i2 and Prusa i3. The latter has become an absolute hit, becoming the basis for creating countless variants around the world – and thus, the beginning of the careers of many companies. Today you can find dozens (hundreds…?) comapnies around the world develop their business based on this design. Prusa i3 is undoubtedly the most important 3D desktop printer of our time, whose popularity is growing every year. 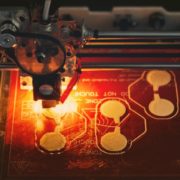