In the second half of June, Ultimaker released the latest version of CURA 2.6 and new firmware for its 3.7 version of the printer. Both updates have introduced a number of new features that we will be describing successively on the portal. We start with an interesting and useful new firmware feature that cleans the PrintCore modules of a 3D printer.

Clamping of printheads in FDM 3D printers is a common problem when we use alternatingly different types of filaments and / or often change suppliers. The filamentous residue settles on the head and if we change the temperature to a lower one (eg ABS or PETG to PLA), they can block the flow of the filament and prevent it from flowing correctly. The same applies to all kinds of extras that go to the filaments of different manufacturers, modifying their properties – we never really know what is in the material we use, and certainly with how much they will react to other types of material?

The methods used to get rid of clogged heads are quite a few. Ultimaker introduced a rather interesting procedure for cleaning the head from the device itself. It does not require a 3D printer to spin up or experiment with temperatures. All we need is a dozen minutes of time and white (or another bright) PLA filament.

The procedure for cleaning the heads is called from the main menu of the 3D printer:

After selecting the option, Ultimaker will ask us kindly to get acquainted with the instructions on his site, but we will not find anything more in what I describe here. First, we choose the head that we want to clean:

Then select the filament we want to use for cleaning. We have a choice of a special cleaning filament (its premiere is due in days) and the PLA. I chose the second option.

The 3D printer warms up the head and then asks us to remove the filament guide tube to the heating block.

To do this, first gently remove the clamp around the tube entrance …

… then pull out the tube with the remnant of the filament from the block.

Now we are preparing 3-4 pieces of filament not longer than 30 cm. It is important that the filament be white or some other bright color – so we see dirt on its surface. When we have it at hand, we insert the filament into the hole and push it until it starts flowing from the nozzle. We confirm the operation by clicking the rotary wheel in the 3D printer. Then the following message will be displayed:

All we have to do is continue to push the filament into the nozzle while it will gradually cool down. By the same token, it will become harder at times, until eventually impossible.

At the same time, we will notice that the first contaminants will start flowing out of the nozzle… 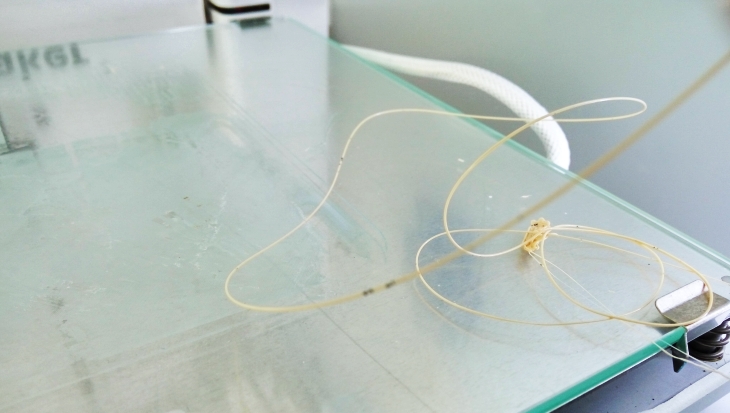 When the temperature falls to a certain level, the 3D printer will release us from the filamentary pressure and will continue the operation.

The next step is to extract the filament from the block – here it is useful to pliers or pliers, because the filament can pretty well lock in the nozzle.

He asks us whether the filament is clean?

If we select “NO”, the 3D printer will ask if we want to repeat the operation? We have two options “HOT PULL” and “COLD PULL”, which from the point of view of procedure do not differ from each other. I decided to repeat HOT PULL.

The second approach to cleaning the nozzle ended with a better result, but still far from ideal.

The nozzle was cleaned up only the third time:

Finally, the procedure is quite fun to handle, but we have to prepare for it to take about 20 minutes. On the other hand, it’s a fantastic time, especially since we did not have to spin anything, bathe in acetone, and hand-sew it with needles.

As a curiosity, I would like to point out that the procedure described above caused the PLA blockage of a manufacturer, which is not the hardest challenge in the world. I do not know how to handle ABS, PC-ABS, nylon or PETG blockage? I am also curious as to how the cleaning filament will work to hit the market in the near future.

I also carried out the cleaning on the second head (PrintCore BB) dedicated to the PVA filament. I also used PLA for it and the procedure also ran without any problems. 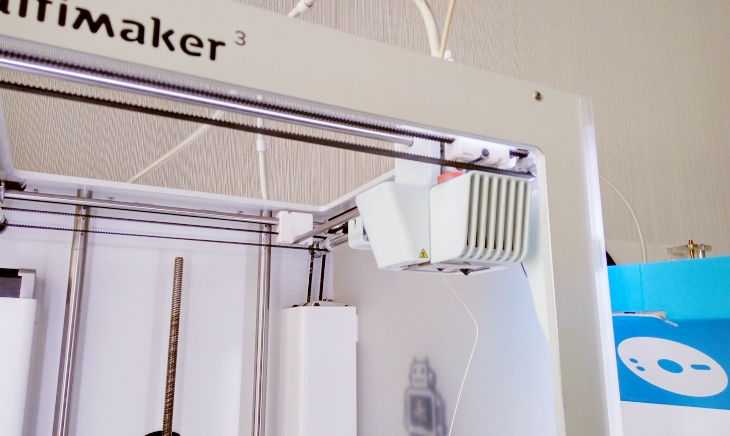