ZMorph, a company based in Wroclaw, is one of the biggest and the most popular 3D printers producers in Poland. Its flagship product is a multifunctional device combining a 3D printer with a CNC milling machine, laser engraver and a system for 3D printing from thick pastes and semi-liquid materials. Lately, we presented unboxing and the first launch of the Zmorph VX. Today we will look at its basic function which is 3D printing.

The exclusive distributor of ZMorph 3D printers in Poland, SEB-COMP, made it possible for us to test the device. It  is offered in two price options: as a 3D printer itself at a price of €2,399.00 net and in a full set at a price of €3,799.00 net, where all additional toolheads are included: CNC milling machine with a dedicated table, laser engraver, a toolhead for 3D printing from thick-pastes and a head for 3D printing from two colors or materials.

ZMorph has a very rigid and solid structure, with the working chamber covered with two characteristic panels. The working area of the 3D printer is 250 x 235 x 165 mm. A color touch panel and an SD card are dedicated for communication. The transfer of files from the software to the device is performed via the SD card. Like every major manufacturer of 3D printers, ZMorph has its own proprietary control software – Voxelizer (to which we will devote separate articles on the website).

So far, we have made a dozen of relatively simple prints on a 3D printer, checking first of all whether and how it can handle the most popular types of filaments. In the previous article, we tested gray and pink PLA from F3D Filaments, now we will present prints made of Premium PETG and ASA Pro from Spectrum Filaments and ABS from Fiberlogy.

But before we get to this stage, a few words about 3D printer design solutions. As it was mentioned before, it is a very solid and durable device – due to the additional functionality of CNC milling. In order to be able to easily cope with milling e.g. Teflon (ZMorph has such a possibility), the frame of the device is extremely rigid and strong. Although it does not matter much for the 3D printing process itself, it is worth being aware that we are dealing with an extremely durable 3D printer. Interestingly, this does not significantly translate into the weight of the device, which weighs several kg. Despite its rather large dimensions, it is easy to move thanks to the recesses in the upper – extreme parts of the housing.

The front and the back of the ZMorph are covered with casings, which on the one hand protect us from the fumes, which are emanated during printing from several plastics (e.g. ABS), and on the other hand improves conditions of 3D printing (a higher and relatively normalized temperature is naturally produced in the chamber). The covers can be lifted up – they are equipped with magnets that keep them opened when you want to do something at the 3D printer table.

Extruder is large and heavy, but we have not noticed any influence on the workflow. Loading and unloading of the filament is hassle-free – just insert the filament tip into the opening and press it gently – the jagger and bearing will smoothly guide it into the print head.

In front of the extruder we mount the cooling – we insert a small fan plugin, then we install the whole set on the magnet. That is a very interesting solution..

In the back, there is a terminal named RIGHT, which we insert into the socket in the casing, in order to calibrate the working table (we described it in the previous article). The models are printed with the unplugged cable.

The working table can be easily removed- we can replace it with a milling or laser engraving table. In order to do so, shift the lever on the left and lift it up. To be clear- we need to remove the table, only in order to exchange it for a different table. If we intend to print primarily, we will not have to use it.

Earlier versions of the ZMorph suffered from the unfortunate distribution of the filament, causing it to get stuck at the casing level. In the VX model it is solved in a simple way – the material is suspended on top, directly above the extruder, entering the chamber through a small gap between the edges of the covers. This shortens the distance that the filament goes to the printing system, which may have a positive effect on working with flexible materials (we will check it!).

3D printing itself does not cause any larger problems – provided that the 3D model is prepared in a proper way. We do it on Voxelizer – ZMorph’s proprietary program, which has a number of equally interesting and unusual solutions. For example, support structures, which in many programs either turn on or off – here they have a number of different variants, which, combined with the possibility of editing numerous advanced settings, allows us to generate them quite precisely in the context of a given application. The problem is that you have to find yourself in it first, so as not to make mistakes. After printing a few models, we already know where it was possible to generate supports better.

Another unusual Voxelizer feature, which requires attention is setting of the proper layer height and the density of the model’s fill – instead of setting them “by finger”, we can choose from several presets, which can be modified with the sliders.

However, these are just nuances that you just need to get used to. Z-SUITE Zortrax and CURA Ultimaker are based on a completely different logic of this type of settings. In fact, the only thing about ZMorph that I find it hard to get through is the terribly loud noise of the extruder parking in the Z axis. During operation, the 3D printer is very quiet, however, when we leave the raised extruder after finishing work, it can be heard within the entire office (regardless of its surface!).

Apart from one detail that was spoiled due to the tangled filament on the spool, none of the others caused us problems. We printed several transparent and black PETG respirator tips, two cream ASA 3D printer housings, and two white ABS mounts. All details had 50-90% filling and a layer of 0.15-0.25 mm. 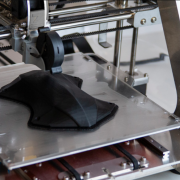