Nowadays, you would be hard-pressed to find a tech-savvy designer that would say that 3D printing technology hasn’t (at least somewhat) affected the way we look at the world around us, from our everyday products to pieces that are fit for a museum. But, not too long ago, additive manufacturing wasn’t considered a must-have tool for product development or high-end applications, such as fashion. One of the earliest adapters to truly utilize the full potential 3D printing for design-work was Francis Bitonti, owner of the recently renamed New York City-based design space, Studio Bitonti.

With a background in architecture and civil engineering, Bitonti has successfully integrated 3D printing technology into the world of contemporary design, product development, and more. Bitonti started the studio back in 2007, and has since collaborated with a multitude of brands and companies. Bitonti and his studio truly rose to prominence after working with designer Michael Schmidt Shapeways to create a 3D printed dress for the iconic burlesque dancer Dita von Tees. The dress resembles a chainmail material, and is composed of over 3,000 articulated connections, making it both flexible and aesthetically geometric.

Since then, Bitonti and his studio team have come a long way, working with various companies on high-end initiatives, as well as product development too. Studio Bitonti (previously known as Francis Bitonti Studio) even saw a recent overhaul in its name and logo, which is essentially preparing him and his team for the next generation of innovative design and collaborations. I had the opportunity to visit Bitonti and his studio this week, getting a close-up look at some his most renowned work while picking at the designer’s brain, who provided me with a comprehensive look at how he envisions his studio, product design, as well the 3D printing industry as a whole. But, before we got into the specifics, Bitonti explained to me exactly how he came to become so involved in 3D printing technology to begin with.

“I was originally trained as an architect, and graduated right around the time that the housing market bursted, so there wasn’t much work in the field. So I was working as a civil engineer and then started as a product designer,” Bitonti told me. “I learned a lot about the process of manufacturing goods, and a lot of it was plastic, a lot of injection molding. Then I encountered 3D printing, and we got these samples back, and I started to realize it was comparable to what we are already getting. Once I started seeing ABS prints that were essentially close to functional parts, I thought maybe there is actually something bigger in this, maybe this is something that will change the way we design and manufacture products. So I got really serious about it after that.” 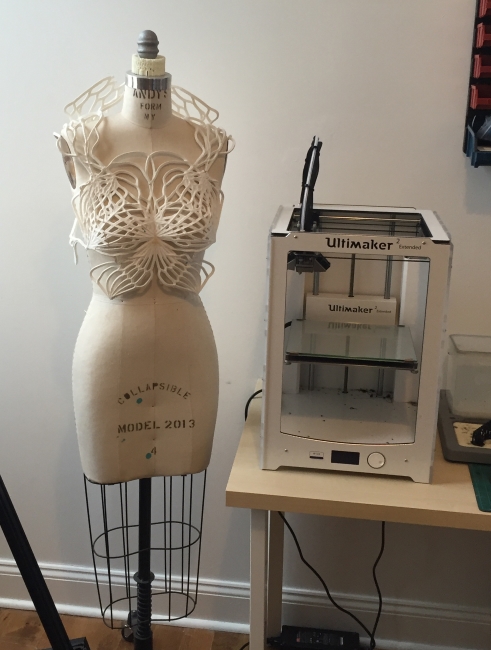 During our conversation, Bitonti wavered back-and-forth between his work in high-end fashion and product development, the latter of which Studio Bitonti is looking to immerse themselves deeper into. But, still, although product development might be most enticing to Bitonti, the designer knows that in order to succeed, his team must continue to stray down both paths.

“I think we’ll always have to stray down both roads, I think as long as I’m alive and running my studio, I see us doing that. If we’re going to be involved in emerging technology, and we’re going to continue doing research of our own motivation, we need to show people what it can do. It’s not that I see these pieces as the crown and glory of achievement, it tells a story that evicts an emotional response from people, and they can see a future in it,” said Bitonti. “That’s really what a designer does, you have to create that emotional reaction towards things we wouldn’t normally have an emotional reaction to. I see the product development as the most fulfilling, because you’re not only getting someone amped up about the future, it’s actualizing that future, making it a reality. It’s something I want to be more focused on in the studio, but I don’t think the other work will ever go away.”

Bitonti has been involved with the many aspects of 3D printing technology for quite a while, and has looked at the emerging technology fondly since his studio launched in 2007. The designer has certainly noticed a lot of change in the industry, and although many of us were left disappointed by the outcome of the desktop 3D printer hype from the last year or so, these machines have benefited Bitonti and his studio team tenfold.

“3D printing has change a lot, in some amazing ways. For one, the accessibility, I showed you the bike rack we did in the studio. When we did that in 2007, that bike rack cost $50,000, and it was a FDM print. Desktop machines, at that point, were not in the position to do something like that. But, what desktop machines have allowed us do is experimentation, and I still look at desktop machines like this. A lot of people are surprised by how many we have in the office, but you can’t do the research and processing engineering that we do on an industrial machine, we would destroy them,” Bitonti explained. “I’m not going to buy a machine for half a million dollars, take it apart, and send in custom g-code, you’re just not going to do that. For us, it’s ideal for proof-of-concept work, for a research tools, I see desktop machines as a development platform. The big thing to me is accessibility, it’s really ramped up the rate of which we can do these projects that we never could have done before.” 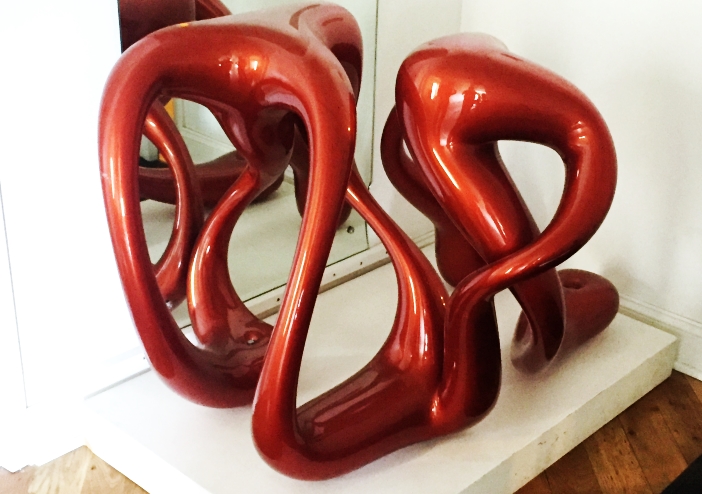 As for what Bitonti is excited for, the designer is looking towards major brands and companies to help drive innovation forward. Although an tech-savvy individual such as Francis Bitonti may be capable of innovation of his own accord, collaborations and strong teamwork are what he feels will continue to drive 3D printing technology to its full potential.

“What I saw happening last year with Nike, Under Armor, and New Balance with the help of Nervous System— who is one of my favorites—is that these are serious people investing a lot of energy into figuring this out. I’m much more interested in seeing what the brands are going to do, in the past, it was exciting to go to print shows and see what independent designers were making. But, I feel that it’s becoming a little less interesting as the problems get bigger,” Bitonti said. “I think we’re also crossing the threshold of things you can do from your garage, so these collaborative efforts need a lot of support, and that’s where we’re at right now. We need to be dealing with these problems in teams, not as garage speculation.” 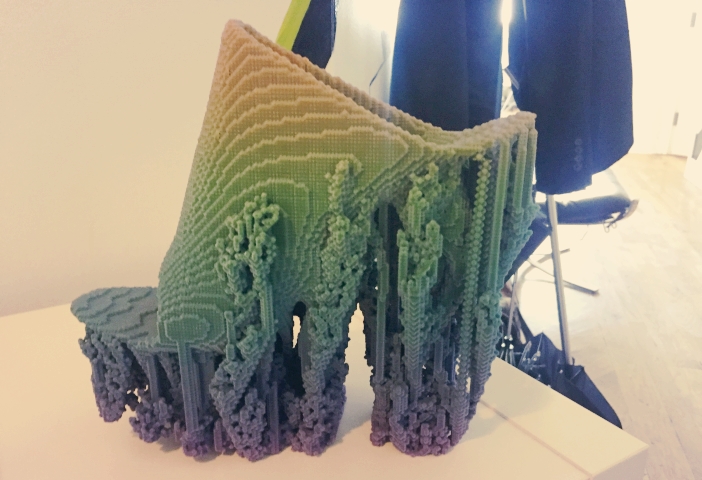 As the year progresses, you can expect more collaborations involving the Studio Bitonti team to come to light. For instance, the studio is currently working alongside Feetz, the up-and-coming 3D printed shoe company, who have been rolling our customized 3D printed shoes at an affordable price point. Until then, you can check out Studio Bitonti’s redesign, and revisit some of their most innovative 3D printed work, such as the Molecule Shoes, the gold-plated 3D printed high heels created in collaboration with United Nude and 3D Systems, or the anatomically-inspired Verlan Dress.