Raise3D, manufacturer of large-size desktop 3D printers, announces the launch of a new, more advanced Pro 3 series 3D printer at the end of 2021. After the success of the Pro 2 series devices, the company decided to create an improved version that meets the needs of small-lot production of end parts, tools and spare parts.

The manufacturer’s new machines are dedicated to customers who expect high-quality, low-volume production. The devices are more efficient and reliable than their predecessors from the Pro2 series. According to the manufacturer, the Pro3 series 3D printers can be easily integrated with the production environment thanks to the connection with the Raise3D 3D printing software ecosystem. It includes the ideaMaker slicer and RaiseCloud production management software.

The Pro3 line of printers consists of two machines for 3D printing from two materials: Pro3 with a working chamber of 300x300x300mm and its enlarged version Pro3 Plus, thanks to which it is possible to produce elements up to 300x300x605mm in size. In addition, they are to be more repeatable and easy to use than the previous Pro2 series.

The Pro 3 series devices allow you to manufacture from a wide range of materials, both basic and industrial. They enable extrusion at temperatures up to 300 ° C, allowing for 3D printing from PLA, ABS, HIPS, PETG, ASA, but also from more demanding materials such as TPU, TPE, NYLON, PC, PP, PVA and special materials doped with glass and carbon fiber , particles of metal or wood. The use of the manufacturer’s filaments and materials approved under the Open Filament program allow for the highest quality of parts produced on the Pro3 line devices.

What improvements have been made to the new Raise3D devices?

Pro 3 series 3D printers are equipped with an independent modular extruder with the possibility of double extrusion. It also allows for 3D printing from advanced materials, but the extrusion of some industrial plastics requires the use of a special nozzle. That is why replacing the heads in 3D printers from the Pro3 line is easy and fast. The heads are designed to minimize clogging of nozzles and enable efficient component replacement, reducing downtime. They are equipped with a “click and block” system that requires no tools and allows you to track and record the nozzle run time. The improved system of interchangeable heads has been designed to efficiently change the nozzles, adapting them to the type of extruded material and easily increasing the production speed.

Until now, devices from the Pro2 series have been delivered calibrated at the factory and did not require further calibration. With production applications in mind, 3D printers from the Pro3 line have the function of automatic table leveling. This option allows you to ensure high quality of manufactured parts and significantly reduces calibration time, thus increasing production efficiency.

The Pro3 series machines are equipped with the Air Flow Manager, which improves heat dissipation and air circulation, maintaining stable temperature conditions inside the 3D printer chamber. This is of particular importance when manufactured from materials that undergo severe heat shrinkage. In addition, they are equipped with a HEPA filter that cleans the air inside the working chamber. All these improvements make the 3D printer independent of external conditions, ensuring higher repeatability and quality of 3D prints.

EVE is a system that helps users to locate and solve problems arising during the operation of the device. In addition, the virtual assistant constantly analyzes the use of the 3D printer and sends out maintenance reminders. Raise3D is the first company in its segment to introduce a feature that takes the usability of professional 3D printers to the next level.

In addition, the Pro3 series devices are equipped with a flexible build plate that makes removing prints easier. Automatic detection system for open work chamber door, which stops printing as soon as the door is opened and resumes it when it is closed. The software has the ability to resume 3D printing after a power failure. The devices are also equipped with an HD camera with high image quality, enabling the monitoring of the progress of the process. In addition, the devices have a more stable structure and operation, thanks to the increased stiffness of the Z-axis rod.

According to Edward Feng, global CEO of Raise3D, with the launch of the Pro2 series in 2018, the company began to raise standards. This was appreciated by the market, awarding Raise3D 3D printers with appropriate, numerous awards. After the success of the Pro2 series devices, the company did not rest on its laurels and started working on the promotion and implementation of its solutions. The result was the creation of subsequent models of devices – the Pro3 series and the desktop 3D printer – E2CF.

The premiere of the Pro3 series is planned for the end of the fourth quarter of 2021, while the final date has not yet been determined. During the online event, Raise3D will present new 3D printers. The Pro3 series 3D printer will also be exhibited at Rapid + TCT in Chicago on September 13-15 and Formnext in Frankfurt on November 16-19. Pre-sale will be available a few weeks before the sale begins.

The Pro3 series devices will be available at the following prices: 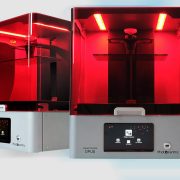