3D metal printing technology is commonly associated with the process of selective sintering or fusion of powdered metallic powder with a laser beam (DMLS, SLM) or electrons (EBM), but the problem is much more complex. One of the most well-known alternatives is, for example, surfacing, i.e. covering the details with a metal layer by welding, which allows the creation of new spatial structures. Today we will focus on the another method, which though not as popular as the mentioned above, is an extremely interesting manufacturing process that allows the creation of complex geometries from metallic powders, without the need to design and use complicated support structures – Binder Jetting.

Binder Jetting technology was developed in 1993 by MIT researchers (Massachusetts Institute of Technology) and consisted of selective bonding of gypsum powder with a binder sprayed by a head similar to those used in paper inkjet printers. Interestingly, initially it was called “3D printing” which was finally adopted to describe all additive methods. Over time, this technology has evolved in several directions – scientists from MIT founded their own company – Z Corporation (acquired in 2012 by 3D Systems), which developed 3D printers printing gypsum full color spatial prints, while the German start-up Generis developed in 1999 a similar method, where instead of gypsum sand was bonded. 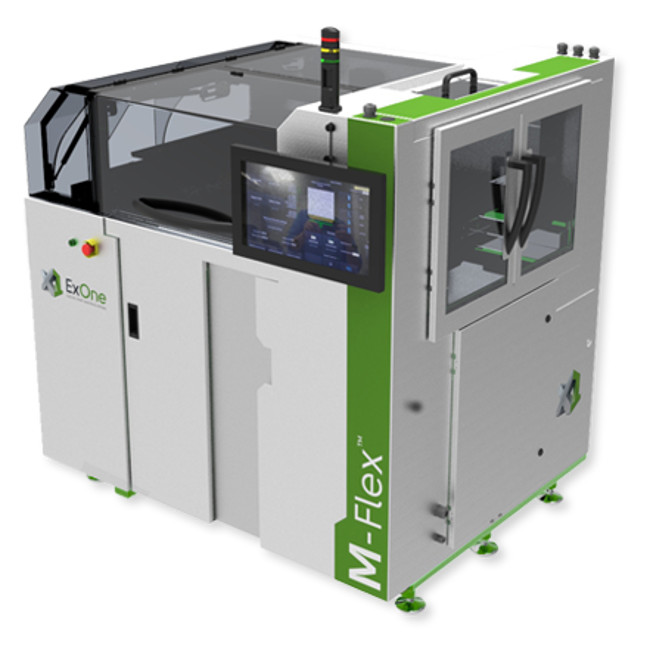 Generis manufactured the first 3D printers printing sand molds or sockets to create them. In 2003, the company split into two entities – described several times on the pages of the voxeljet portal and ProMetal RCT, which is part of the Extrude Hone Corporation (EHC). Two years later, ProMetal RCT transformed into ExOne, becoming the most important provider of such solutions in the world. At the same time, the company developed a similar manufacturing technology where the sand was replaced with powdered metal.

How does printing from metal in Binder Jetting technology work?

Binder Jetting is a technology that works similarly to the method of printing with ink on paper. It involves bonding metallic powder with liquid binders, which then evaporate during the heating and sintering processes. The manufacturing process takes place in four stages:

First, in the printing chamber, the 3D printer feed distributes the metallic powder over the entire surface of the work table. Then the printhead spraying selectively liquid binders, bonding the powder and forming the so-called voxele, or three-dimensional pixels – the smallest element of space in three-dimensional graphics. 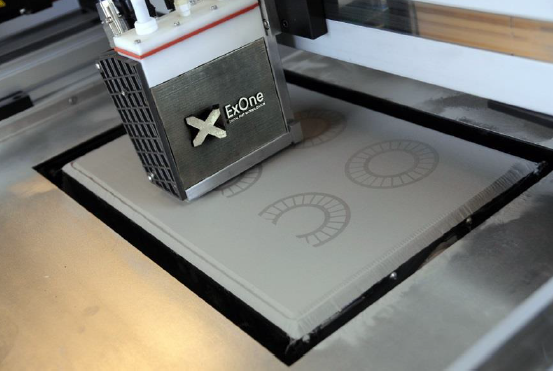 After applying the adhesive, the working table of the device is lowered by the given layer, and the feeder cures the liquid photopolymer with UV light. In the meantime, the print head is cleaned. Then further layers of the powder are applied, which is bonded and hardened.

When the 3D printer is finished, the machine operator can go to the post-processing stage …

The working chamber is removed from the 3D printer and placed in the oven. The curing process takes place at a temperature of about 200-260°C and takes about 6-10 hours. The soaking time depends on the height of the prints.

At this stage of the work, unblended metal powder is recovered. This is done with both a small vacuum cleaner and a set of delicate brushes and compressed air. 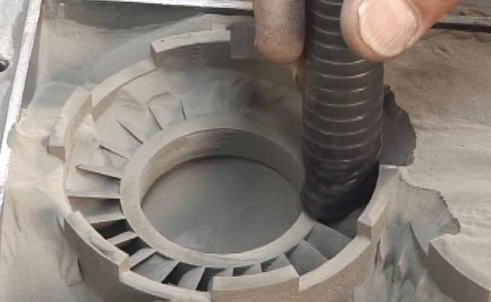 The recovered powder is fully suitable for re-use, while the obtained spatial models are sent to the high-temperature furnace.

The last element of the process is sintering in a special high temperature furnace at temperatures of about 900-1400°C. Prints are placed in a special bed, backfilled with graphite and prepared for infiltration, which takes place using the capillary effect.

Thanks to the use of bronze, whose melting temperature is lower than the melting point of metallic dust, small spaces are filled, which increases the density of the printout. The sintering process is a mandatory production step as opposed to infiltration, which is optional. Infiltration improves the density of the printout, but it may weaken its mechanical parameters, so it depends on the design assumptions.

After sintering, the detail is ready for use.

As you can see, the process of 3D printing of details is much simpler than sintering / melting metallic powders with a laser beam, however, it is associated with a multi-stage post-processing process. How does this look in comparison with other production methods?

The main advantage of the Binder Jetting process is that, unlike laser or electron technology, there is no need to create a gas atmosphere in the working chamber of a 3D printer, based on noble gases (eg argon). This obviously reduces the costs of operating the machine and storing and ordering the gas itself.

The second issue is the saving of electricity in relation to laser and electronic 3D printers. A 3D printer working in the Binder Jetting technology does not generate a high power consumption, in turn, the heated stove keeps its heat.

The third advantage is the ability to quickly change metallic powders and easier experimenting with new metal alloys. As the 3D printing process itself is much simpler than laser / electron methods, cleaning the machine and loading a new alloy is definitely cheaper.

Of course there are disadvantages of this technology… In order for energy costs to remain relatively low, the furnace in which the prints are bonded should work all the time, so as not to cool it down and heat every few-dozen days.

Control of shrinkage is important – the printed detail is subject to two subsequent, independent stages of heating and baking, so already at the design stage of the printed element, we must predict whether and how it will behave during post-processing?

It should also pay attention to the homogeneity of the printed detail and determine if it will be comparable to those produced by laser / electron methods?

Finally, it must be remembered that the melted details have higher strength than bonded and baked parts and sintered in furnaces.

So in the final analysis, everything comes down to what will be the final purpose of the printed details, what forces will be subjected to during operation and whether we are able to afford higher costs of using a 3D printer in the case of a laser?

In mid-November, just before the start of Formnext 2019, the Spanish BCN3D Technologies ...

Since last year’s November we had the opportunity to test the dual-head 3D ...