Zortrax Inventure is the most technologically and functionally advanced 3D printer from the polish manufacturer. Its market premiere had some delay compared to the original announcements, but eventually in it went on sale. We have the pleasure of using it for almost a year and we are able to confidently say that it was worth waiting for this 3D printer. In this article, we will familiarize you with the specificity of working with Zortrax Inventure, and start from unboxing and so-called “first impressions” of working with this 3D printer.

Inventure is a completely new Zortrax approach to 3D printing in FFF technology. It is still a desktop device, however, taking into account the functionality of the device, it stands at a higher level than traditional 3D printers of this type.

Its three characteristic features are: 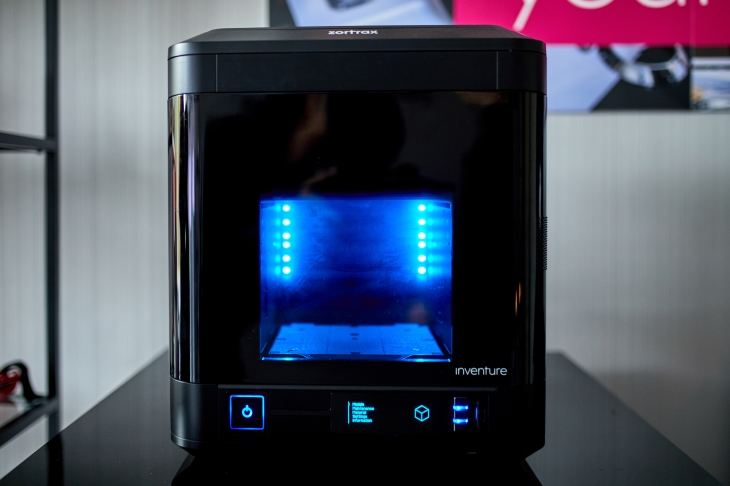 Inventure uses material in cartridges and replaceable plastic work tables. So we forget about the traditional 3D printer service known from the M200 and M300 models – in Inventure everything is fully automated, and the scope of the user’s work in its operation has been reduced to an absolute minimum. On the other hand – if you are looking for the cheapest device to use, this 3D printer is not for you. Zortrax directs its device to professional users who value the comfort of work and trouble-free printing of good quality spatial models.

The 3D printer came to us together with the DSS Station. Both devices come in two cardboard boxes – brown outside and black and white inside, with the company logo and a description of the equipment that is inside. The whole is very well protected by characteristic, gray foams, and the devices themselves are additionally packed in foil. 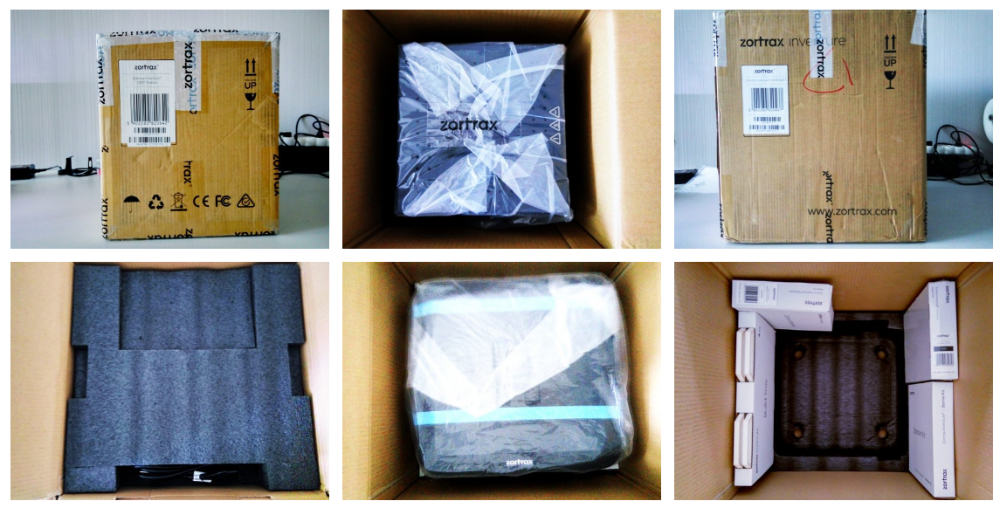 Both the 3D printer and the cleaning station are accompanied by quick start device instructions cards. Inventure is also equipped with a set of four work tables, two cartridges with filaments (in our case it was Z-PLA in green and Z-SUPPORT) and as usual a very generous set of tools (including a spatula, pliers, tweezers, knife model, set of allen keys, screwdriver or needles for purging printheads). 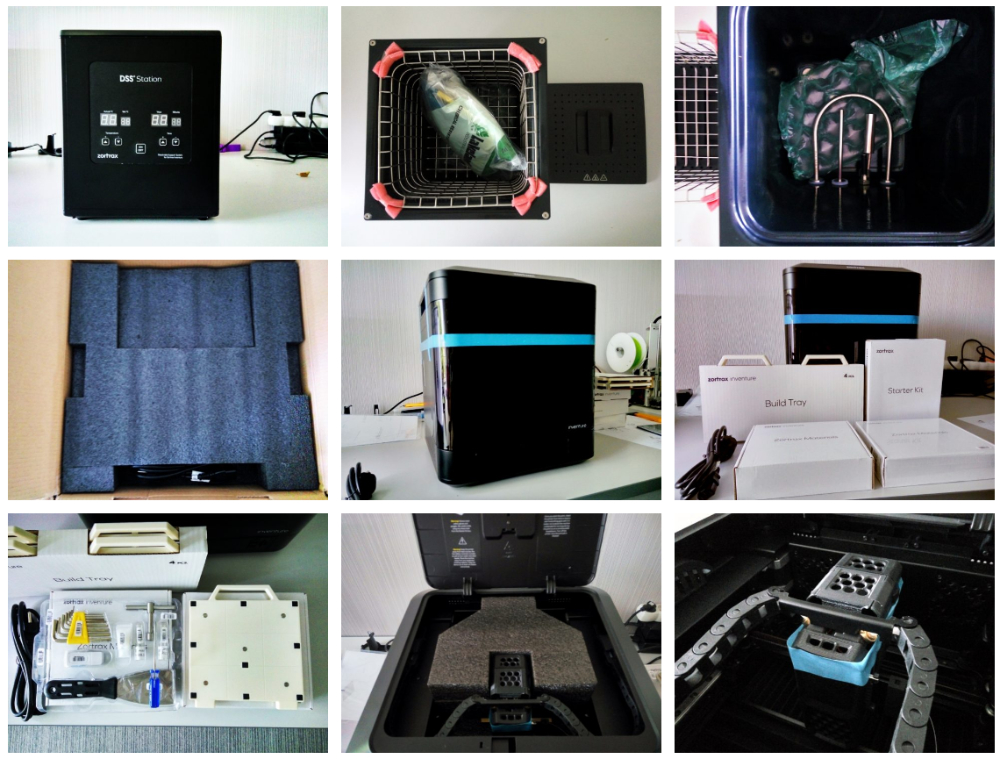 After removing all the security features of the 3D printer inside, remove the security screws from the cartridges provided with the screwdriver and place them in the dedicated side chambers (right for building material, left for support). At the start, the device will ask you to insert the inserted SD card with the latest version of the firmware. It’s worth downloading it from the manufacturer’s website, along with the Z-SUITE 2 software that we install on your computer. 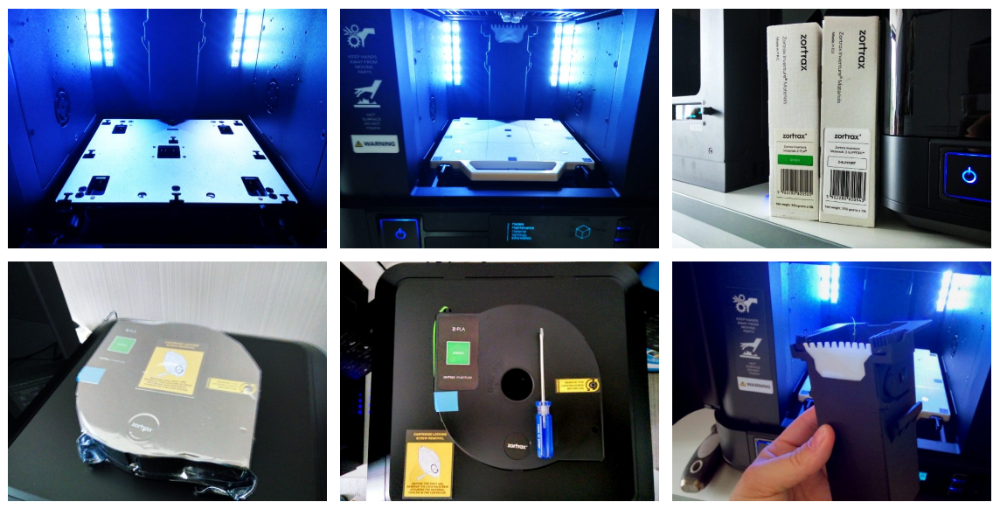 The last thing is the assembly of the work table. Insert it into the holes on the front and immobilize it with two pressure knobs.

Although the 3D printer with its dimensions resembles M200, it is much heavier – it weighs even more than the M300. This is the price of new components that are inside. 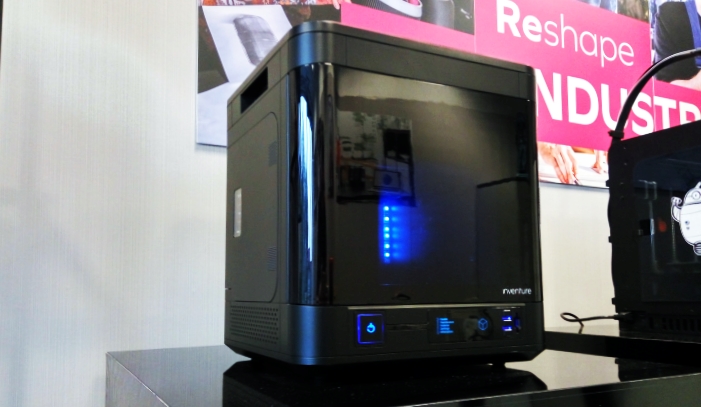 What is worth paying attention to is the quality of the 3D printer. The working chamber is separated from the drive system. Inside, only printheads, a work table and a container with a cleaner for the rest of the filament are available. 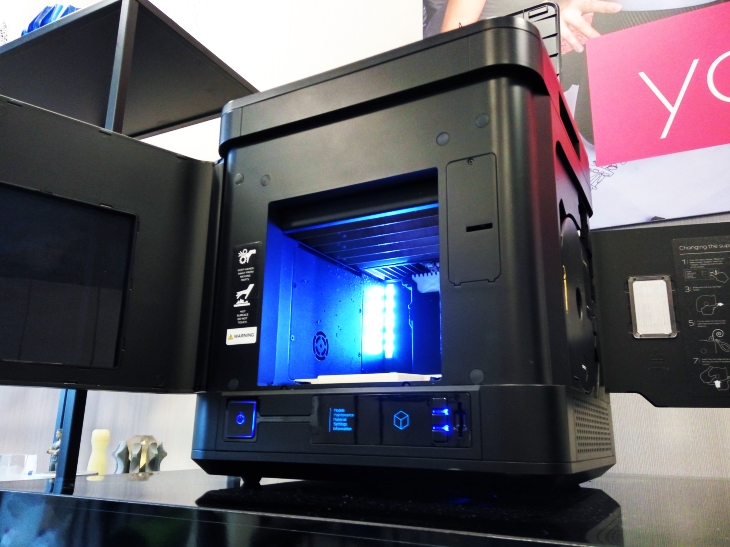 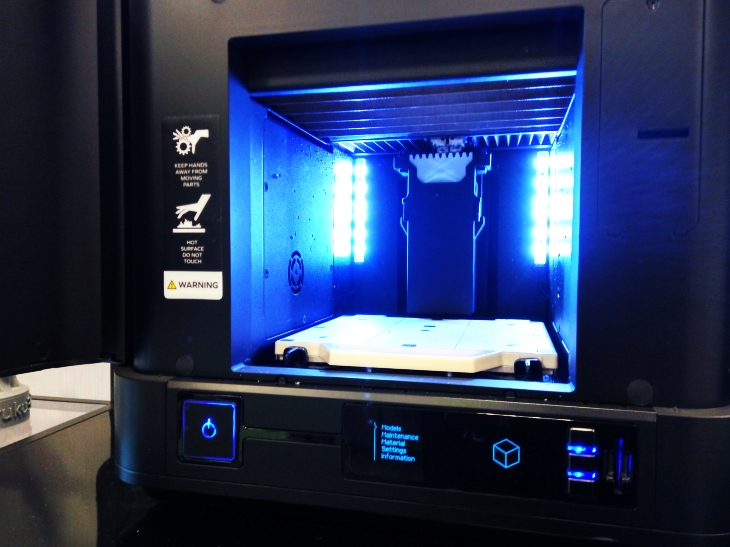 Before starting work, clean it from its remnants.

To install cartridges with filaments in a 3D printer, insert them into the side pockets. Pay special attention to the tip of the filament, which should be cut evenly with the edge of the cartridge neck. Of course, earlier you should also unscrew the security screw, as I wrote above … The cartridge is held by the clamps, which should be moved away.

When the cartridges are in place, we enter them automatically into the extruder from the main 3D printer menu. The menu displays updated information on the consumption of filament. 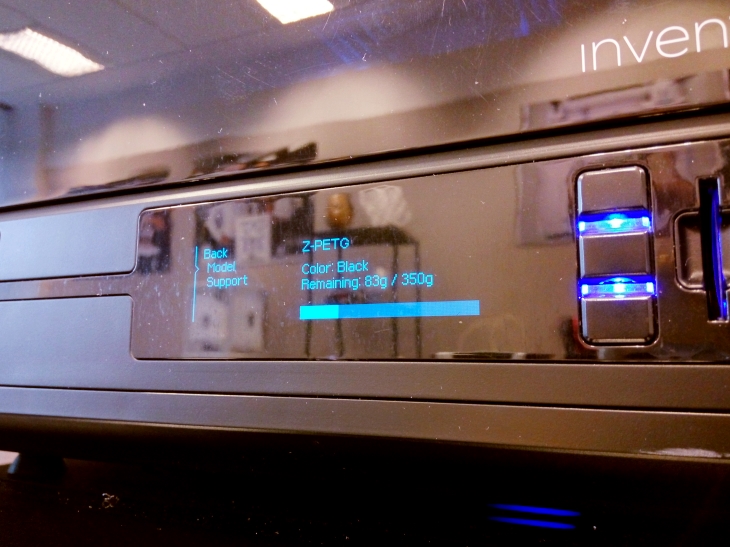 When the filament is loaded, we can start printing. If this first start-up, it is worth to be sure to calibrate the work table in relation to the heads. This is done in a similar way as in M200 and M300, where the menu of the device informs us how much we should turn the screws under the table. Finally, the 3D printer prints a simple calibration printout. When we have it behind us, we are ready to work…

The heads warm up quite quickly. In the case of Z-PLA and Z-PETG, the chamber is not heated, and the door is blocked – you can open it during operation. In the case of new filaments that will be available for sale at any moment (Z-ULTRAT Plus), the chamber will be heated. 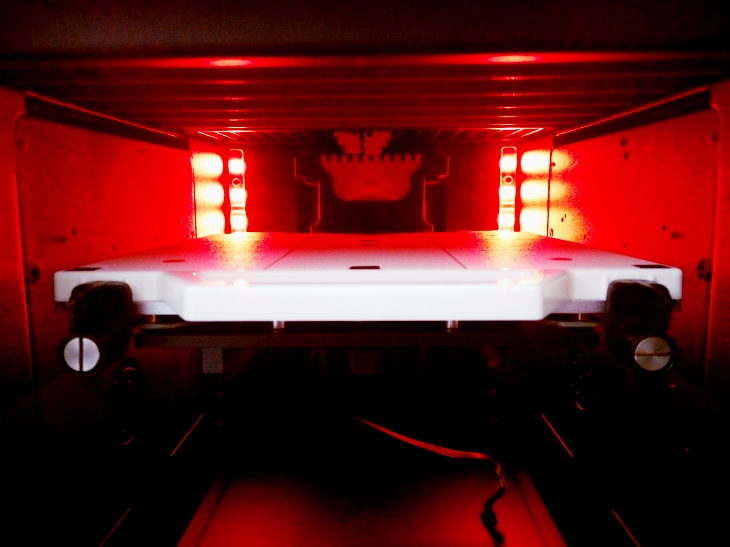 As for the work itself, it runs exactly the same way as in the case of M200 and M300, i.e. without any problems … Although the table is not perforated, the 3D printer prints the raft, but it is made of Z-SUPPORT. Thanks to this, the print can hold onto the ground well, and at the same time there are no problems with separating it from the raft. As for the life of the tables themselves, we still print on the same and did not notice any problems with its operation or consumption.

The Z-SUITE 2.0 software is simply great. Especially the last update to version 2.2 has greatly improved the speed of its work and cutting models. 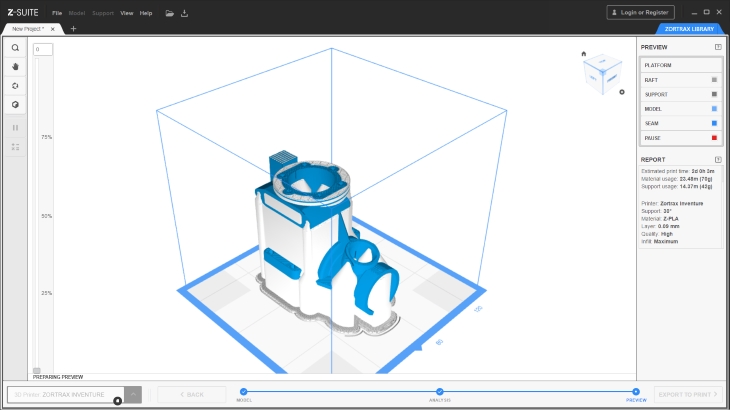 One important remark – the first prints from the green PLA were still cut in the beta version of Z-SUITE 2.0 and here and there the gaps appeared on 3D printouts. In subsequent updates, this issue has been resolved and no longer exists.

So far, we have tested two construction filaments, which are currently on offer from Zortrax – Z-PLA and Z-PETG. Both print perfectly, but in the case of complex and complex geometries made of Z-PETG, there is a problem with threading. With simple details, the final effect looks perfect. 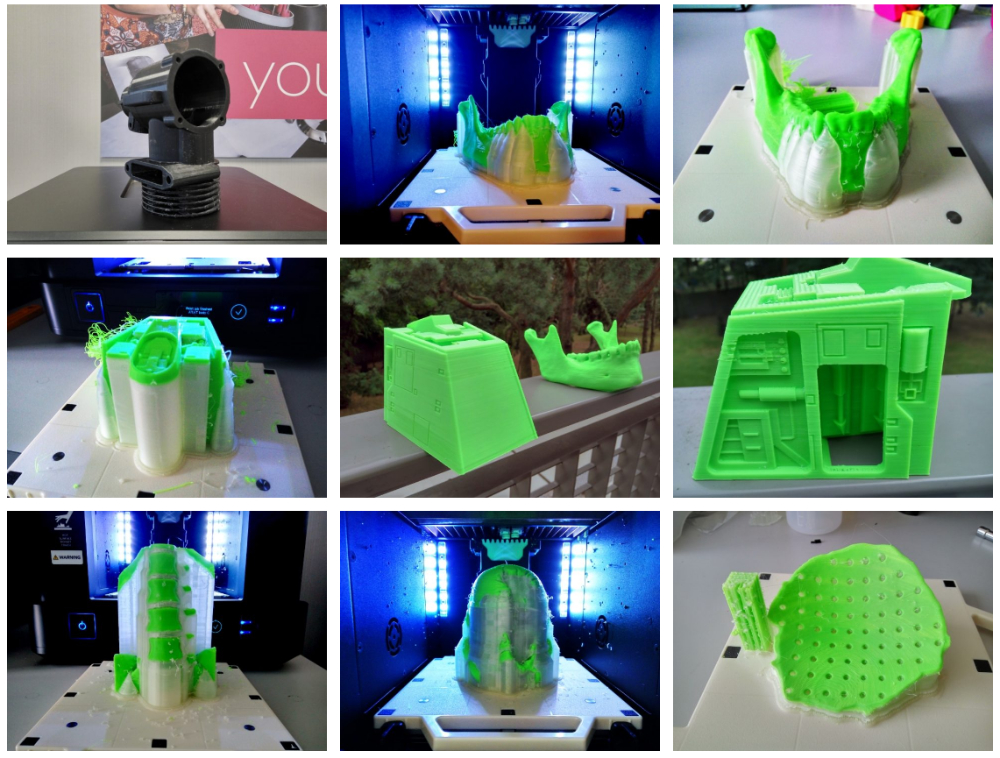 As in the case of the Zortrax M300, Inventure is also characterized by seamless, continuous work. We have two prints lasting over 40 hours and we did not notice any problems. 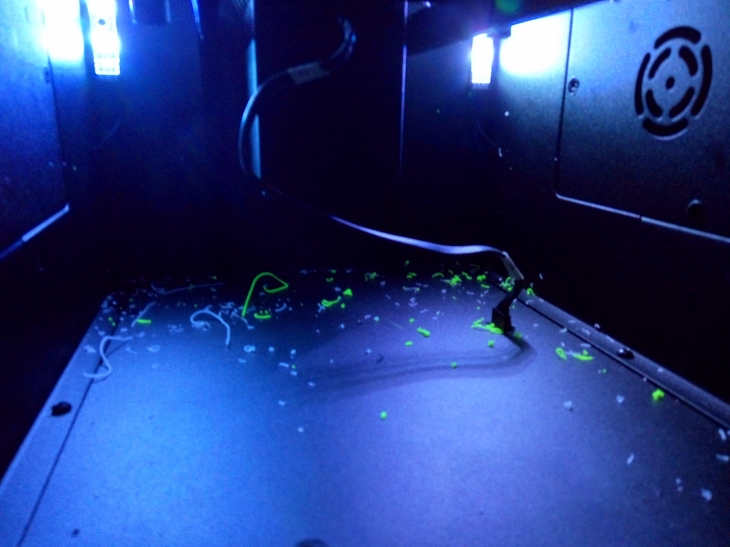 On the other hand, one should prepare for the fact that the process of printing of two filaments – building and supporting, is not a pure process. The 3D printer leaves many loosely scattered support filament threads that have no effect on the quality of the printout itself, but require subsequent cleaning of the working chamber itself. A similar problem occurs, moreover, on third generation Ultimaker 3D printers.

Once the model has been printed, we throw it into the DSS Station filled with water. The operation of the device is trivial – we only set the temperature to which the water is to be heated (in the case of PLA it is approx. 40°C) and the time of rinsing the part (by default it is 8 hours). The impeller placed on the bottom sets the water in motion. For the first 25 minutes the water stays cool – this is the time it takes for the support material to soak up with water and begin to dissolve. Only after nearly 30 minutes the temperature reaches the desired level.

Unfortunately, Z-SUPPORT does not dissolve perfectly and completely – on the printout there are characteristic white streaks that must be removed manually using the brush attached to the station. With simple geometries, there is no problem with that – with more complicated it may turn out that the brush is not enough and we will have to use additional tools (eg toothpicks to extract residuals of diluted material from holes or other hard to reach nooks and crannies).

We have checked – even a few days soaking in water, or replacing it after 8 hours does not change the above condition. In some places, Z-SUPPORT is simply in arrears and nothing more can be done without mechanical removal.

Dirty water is poured into the container through the DSS Station rear tube. The resulting solution is not toxic, it is corrosive, so we can easily pour it into the sewage system.

After a few months of using Zortrax Inventure, we can say that it is a fantastic 3D printer. Its obvious drawback may be for some a relatively small work area, but our practice shows that most of the details we print and so on it houses it.

On Wednesday, Zortrax announced financial results for 2021, which were quite… typical for ...

Zortrax today published its financial results for 2021. The leading Polish manufacturer of ...