Metal 3D printing is this additive manufacturing method that arouses the greatest emotions and expectations in the industry. The possibilities offered by this technology theoretically are enormous – on the 3D Printing Center we have repeatedly described the innovative projects and implementations that have been made with it – in energy, automotive or medicine. On the other hand, however, the awareness of what exactly 3D metal printing is all about and what the specificity of working with a 3D printer of this type looks like is very small and often differs from reality.

For metal 3D printing we are using 3D Systems ProX DMP 320 machine. What you will see and read below is only a small portion of what this method is – and should not be treated as a tutorial or guide. Rather, as a contribution to further exploration of knowledge – unless what you see does not discourage.

At the beginning a few words of theory about what 3D printing from metal is all about? It is an additive technology with a number of variations – its most popular type is the selective melting of a powdered metal alloy with a laser beam. Depending on the manufacturer, it has a different name: SLM (selective laser melting), DMP (direct metal printing) or DMLS (direct metal laser sintering). They differ in technological nuances, but in principle they work the same. A related technique is EBM (electron beam melting), where metallic powder is fused with an electron beam (the creator of this proprietary method is the Swedish company Arcam belonging to GE).

Other technologies that we classify as 3D printing from metal are Binder Jetting (selective bonding of metallic powder with a binder and additional heating in an separate oven), BMD (Bound Metal Deposition – 3D printing of metal in the form of a wire, which is then washed and heated) or widely used hardfacing, where we can also create three-dimensional objects by the additive method (unfortunately the quality of 3D prints is quite poor and additional mechanical post-processing is necessary here). An interesting and innovative technique is also NPJ (Nano Particle Jetting) developed by the Israeli company XJet, where the mixture of metal and resin nanoparticles is selectively sprayed by printheads and hardened with UV light, and then thermally fused (the resin evaporates and the metal nanoparticles fuse together) .

All of the above methods have one common denominator – they are industrial technologies and, consequently, are very expensive both in the context of the purchase of the machines themselves and their subsequent operation. Therefore, it is something completely incomparable to the prices of popular desktop 3D printers printing from plastic or light-cured resins. 3D printing from metal in the most popular edition described at the beginning (i.e. melting the powder with a laser beam) is essentially a welding process. This is important because it involves a number of nuances and requirements described below, and that under no circumstances should this technique be combined with 3D printing from thermoplastics or resin. The only related method is SLS (selective laser sintering), where instead of metallic powders we use polyamide.

For the purposes of this article, we printed the Cedrick model – the robot from our old company logo. The robot was made of 316L steel and measures 100 mm in the Z axis. Its weight is over 1 kg! Its market value is… couple of thousand USD! Generally, this is not something that is usually printed on this type of machines.

We start work in 3D Xpert software by 3D Systems, where we prepare a model for the 3D printing.

This is one of the most important and the most difficult stages of the whole process. The 3D printer operator must not only know how to arrange the part in the chamber (and relative to other parts, if we print more than one item), but above all how to generate the right supports?

Generally, powder technologies (CJP, Binder Jetting, SLS) do not use supports, because their role is played by unsintered / unmelted powder (in SLS method, supports are used only when it requires by model geometry or the distribution of models in relation to each other in the chamber). 3D printing from metal is an exception here!

Due to the fact that metals have high shrinkage when subjected to heat treatment, supports are necessary to keep the detail on the table on the one hand, and to remove heat that accumulates on the created layer down towards the working table on the other. In this way, the problem of shrinkage is reduced (but not eliminated) – unfortunately, as a consequence, it is not possible to stack 3D prints in a chamber such as SLS. The number of 3D prints that will fit in a 3D printer is therefore determined by the XY table surface.

What happens if the supports are poorly designed? At best, the model will deform. In the worst it will deform enough that its spreading and leveling powder hook the edge, break the printout and damage the machine. This variant is of course the most extreme, but not impossible. Of course, there is also an intermediate variant – the supports will allow you to make a correct 3D print, but their subsequent removal will prove impossible (the supports are made of metal and are removed mechanically).

When the model is prepared and sent to the machine, the chamber is filled with metallic powder. A big surprise for beginners can be finding out how much it weighs…? Depending on the height of the charge and the type of metal, the weight oscillates within several dozen – over 100 kg! A suitable lifting device is useful for introducing the chamber inside the machine.

When the chamber is loaded, we close the door – or rather a heavy, atomic gate, and screw it to numerous bolts.

When the machine is tightly closed, oxygen is removed from the inside of the working chamber, and then argon is pumped into the resulting vacuum. The most important chemical property of argon is its chemical inertness, which reduces the occurrence of 3D print contamination and plays a protective role in the process of melting (welding) metal powder.

The 3D printing process itself is not very spectacular. The arm distributes and levels the powder layer, and the laser beam “dances” on its surface, fusing / welding subsequent layers of the 3D model.

When the job is finished, the model should be cleaned of unmelted powder. Its consistency is so fine that you shouldn’t work with it without protective gloves (powdered metal even falls between the fingerprints) and masks (there are not as many unhealthy things in the world as taking a breath of metal powder).

The finished print is unfortunately not yet ready for use… First, it should be cut off from the table surface. Usually, this involves later leveling (milling) of the surface of the table itself. Mechanically, the supports should also be removed (in the case of the Cedric model, only those located at the toes can be removed manually – the rest requires the use of tools).

The 3D print surface is granular – this is also the specificity of powder technologies. To smooth it, the detail must undergo a grinding / polishing process.

Operation of the machine is relatively simple – what is complicated is proper preparation of the model for 3D printing, compliance with all procedures in preparing the machine for work and the ability to deal with any problems (we used to experience a problem with too low argon pressure in the system, caused by some triviality in the procedure preparation, which resulted in 3D print pausing). Added to this is post-processing, which requires the use of heavy mechanical equipment. 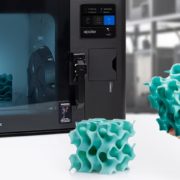 Forget about “ecological PLA” – this butterfly was 3D printed from truly biodegradable resin, made from used McDonald’s oil

3D Systems reports a decrease in revenues for Q1 2022, but it does not look too bad…

3D Systems has published its financial results for 2020 as well as the ...