Zortrax Apoller is an intelligent device that allows automatic vapour smoothing of models made on 3D printers from certain type of thermoplastics. At work, it uses two popular solvents – acetone or butanone (MEK), which are heated and their vapors smooth the details in a controlled manner. The final smoothing effect is nothing new – for many years this process has been used by many amateurs of low-budget 3D printing, however, the way they approach it, in many cases leaves much to be desired in terms of health and safety rules (or rather their complete lack). In this article, we will show you the work with Zortrax Apoller and explain what exactly is “automatic and intelligent” vapour smoothing of 3D models?

It can be said that the smoothing the surface of printed details is as old as the FDM / FFF technology itself. Just as the models produced in this way are cheap and are made relatively quickly, so they have a feature that in some applications can be problematic – very visible layers. This is one of the first things people pay attention to when they first deal with 3D printing from thermoplastics – after all, the common idea of objects made of plastic is that they are perfectly smooth.

The roughness of the details is absolutely irrelevant for utility applications. If a given thing is to work, its appearance, color or surface quality are secondary to physical, chemical or temperature resistance. However, there are applications where the detail should be made of plastic, and at the same time should look perfectly. In such cases, the only thing left is to sand the models or coat them with specialized resin (which should also be sanded at the end). Unfortunately, not all the details are suitable – sometimes they have such a complicated geometry or hard-to-reach recesses that this type of manual processing does not work.

For details made of ABS, the solution may be smoothing their walls in acetone or butanone (MEK) vapors. Both chemicals dissolve ABS, but with proper dosage and exposure, this process can be used for post-processing. Solvent vapors smooth the workpiece surface, giving it a characteristic, shiny gloss. At the same time, the layers become invisible and the porosity disappears.

Amateur smoothing methods have several forms. The most popular is that the details are put into a jar filled with solvent and left for several hours, during which the vapors emitted by the chemicals smooth the edges by gently dissolving them. Another, much more dangerous method involves cooking acetone or MEK in kitchen utensils on a fire, and then exposing 3D prints to the resulting fumes. Apart from the functionality of this type of solution, it is associated with a high risk of fire.

After all, any such amateur method is more or less dangerous because the chemicals used are volatile and poisonous. In addition, it is difficult to obtain a regularly smoothed model because solvent vapors never cover the workpiece evenly.

Over the years, various companies have tried to solve the problem of chemical smoothing of 3D prints in a better or worse way. In 2012-2014, several start-ups were created (e.g. 3D Rafiner) presenting devices of this type, however none of them lasted longer than a year. Stratasys created its own 3D printing smoothing machine – FinishingTouch Smoothing Station, but as with other products of the company, it was a very expensive system, designed largely for industry. The Chinese Polymaker presented in 2016 PolySmooth – a desktop device for smoothing 3D prints, although it worked only with the manufacturer’s dedicated filaments. So when it premiered in 2018, Zortrax Apoller perfectly matched the needs and expectations of the market.

According to Zortrax’s assurances, Apoller was, in principle, to operate on a similar rules as all other products of the company – to be very easy to use, repeatable and guarantee high quality. It was all about inserting 3D prints from the inside of the device, starting the smoothing process, and after its completion – removing the finished parts.

Apoller was based on its own proprietary smoothing technology – Smart Vapor Smoothing (SVS). The working chamber of the device is 300 x 250 x 250 mm, thus it is able to contain the vast majority of details printed on the most popular desktop FDM / FFF 3D printers. The chamber is hermetic and double sealed, which reduces any risk of accidental escape of chemical vapors. At work, it uses acetone or MEK, which are stored in tanks built inside the device. 300 ml of solvent is enough for several dozen hours of use. The process is fully automated and lasts a total of three hours, thus during 24 hours Apoller can smooth the details created on four 3D printers with a standard working area (20 x 20 x 20 cm +/- 3 cm). The smoothed models are ready for use immediately after taking them out of the chamber and require absolutely no additional post-processing work.

The device is safe and, according to the manufacturer’s assurances, it can be successfully used even in an office environment. All components, including electrical wires, which may come into contact with chemical vapors, have a certificate of compliance with the ATEX Directive 2014/34 / EU, regulating the safety standards necessary for devices operating in explosive atmospheres.

Zortrax strongly emphasizes the high level of redundancy that has been used in Apoller. The device has, for example, two sets of seals in the door to the working chamber – although one would be enough, the other was introduced only in case of possible damage to the first. Also, if there is a power outage while the machine is in operation, the working chamber will remain closed with solvent vapors inside, preventing it from uncontrolled volatility. After the power is restored, the Apoller software will know what happened and will automatically clean the chamber of chemicals before anyone can open it.

The models are placed inside the working chamber on a glass platform. The colorful touch panel with which we start smoothing is responsible for communication with the machine. Apoller also has a WiFi module, thanks to which the user can see the progress of work and interrupt the current smoothing session if he deems it necessary from the Z-SUITE software.

The solvent tank is located under the glass table and is filled automatically. The solvent is stored in a separate tank, the inlet of which is located under the flap on the device housing. After starting the smoothing process, the door closes and Apoller pumps the air out of the chamber, which reduces the pressure below the ambient level – this prevents vapors from escaping outside and keeps the chamber closed, even in the event of a power outage.

When the appropriate pressure is reached in the chamber, the walls of the device are heated and the solvent is pumped inside. Apoller begins to change the temperature inside the chamber in a controlled and safe way – first enough to evaporate the chemicals, and then, using the proprietary circulation system, it fumes upwards to cover the models evenly and accurately.

The surface of the models has a lower temperature than the evaporating solvent, which causes the vapors to condense on their surface. Thin walls and small details heat up faster than larger ones, thanks to which they are covered with less solvent. This is because the higher temperature prevents condensation in these types of places. As a consequence, small details are smoothed but do not deform. The SVS circulation system also allows for smooth smoothing of moving elements without the risk of accidentally sticking together the connected parts.

After the smoothing process, the vapors are introduced into the condensation system and condensed there. The condensed solvent is drained into the tank and can be reused. The last step is to re-heat the working chamber of the device to dry the smoothed models. When the process is completed, Apoller informs you about it, the door lock is released and the details can be removed outside. According to what I wrote above – there is no need to carry out any additional finishing works with them.

What are vapour smoothed 3D prints used for?

The first thing that comes to mind is, of course, perfectly smooth and slim figurines, vases and other such non-functional gadgets, but this is not the goal of Zortrax Apoller. Details with smooth surfaces are perfect for all movable mechanisms, because they are better with fit together and have less friction. This in turn leads to less heat produced, which is usually a good thing from an engineering point of view, where the issue of heat dissipation is often a serious problem.

Smoothed models can also be successfully used as sockets for molds. This is especially important because the characteristic layers that are visible on the details immediately after removing them from the 3D printer table would be mapped on the walls of the mold for casting. Another group of applications are models with high water resistance, which is obtained in the process of smoothing, by surface melting of their surface.

To sum up, Zortrax Apoller is an excellent tool to support the 3D printing process in an industrial edition, especially in the casting segment and the production of final usable details, where the quality of the finish matters. 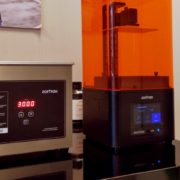 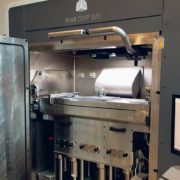 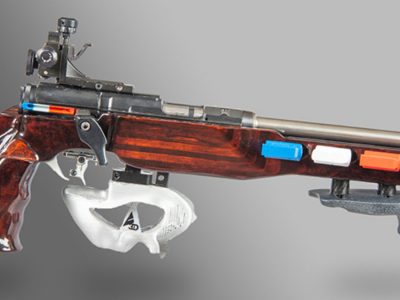 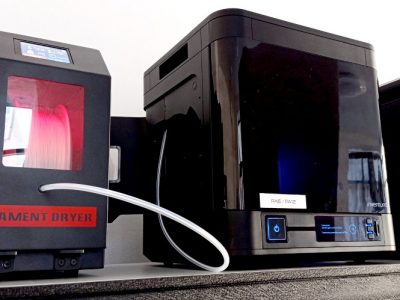 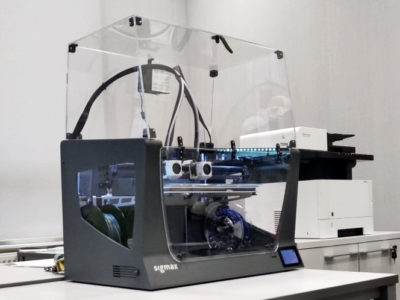