STEELTEK – the polish startup operating on the border of recycling and solutions for additive manufacturing, presents Green-Spool – ecological spools for filaments for FDM / FFF 3D printers, based on recycled and bio-source materials. The company’s products include polypropylene, wood and chalk composites, as well as recycled ABS, PET, HIPS, and polycarbonate.

For several years, one of the leading topics in the world has been the issue of ecology and the circular economy. In many cases these matters are greatly exaggerated in the marketing communication of various companies, which results in the trivialization of this issue. However the problem of environmental pollution with the increasing number of “everlasting” and harmful waste, it cannot be ignored by pretending that it does not exist.

One of the key challenges facing the world is plastic waste. Although it would seem that the simplest solution would be to replace synthetic plastics with biodegradable materials, it is not so obvious. In the vast majority of everyday applications, the plastics used must meet certain technological requirements – they must be resistant to high forces or stresses, high temperatures, aggressive chemicals, etc. Plastics based on natural biocomponents, such as the popular PLA, are completely unsuitable for this.

The chemical composition of synthetic materials, on the one hand, makes them fully achieve the goals for which they were created, but on the other hand, they make them extremely problematic in liquidation. In fact, to get rid of them permanently, only one of two things can be done – burning them, which releases poisonous substances into the atmosphere, or dissolving them in certain chemicals, which requires the use of agents that are even more harmful than the dissolved plastic itself.

For decades, the world has been choosing the simplest solution – dumping plastic in the land, and when there is no room for it, throwing it into the oceans. This, of course, has proved short-sighted and murderous for numerous ecosystems that are degrading at an alarming rate. In the face of the increasingly serious problem of residual plastic rubbish, the concept of reusing used plastics in the production of new things has emerged – Circular Economy.

STEELTEK bases the production of its spools on the principles of the above concept – the startup use waste material for the production and give it a new life. What’s more, STEELTEK pays a lot of attention to reducing the so-called carbon footprint – its products are characterized by a loss of -0.3 / -0.5 kg. To realize the importance of this factor, ones should understand that during the production of one spool of polycarbonate, very popular on the market (with an average weight of 250 g), over 1 kg of CO2 is emitted into the atmosphere – this is a greater mass of greenhouse gas than the amount of filament wound on this spool.

In addition, STEELTEK has optimized the design of the spools, significantly reducing its weight. Thanks to this, Green-Spool does not lose their technical parameters and is 20% lighter than competing products. In the case of the flagship product from the WOOD series, the volume of the material used – thanks to the use of natural fibers (with a negative carbon footprint), is additionally reduced by another 40%.

The spools are adapted to work with the so-called refils – the cheaper variants of the same filaments, but offered in the form of coils, to be put on a spool by a user.

Where did the idea for the production of spools based on recyclates come from, and not, for example, cardboard, which is perceived by many as an ideal material for “ecological spools”? This is how Łukasz Łukasik himself explains it:

The appearing cardboard spools, in my opinion, do not fully meet the premises of the zero-waste philosophy. This is mainly due to the fact that the recycling of cardboard uses enormous amounts of water and energy, and in the production of the reels themselves creates mountains of waste. Just imagine cutting circular discs of the sides of the spools from a rectangular sheet – the geometry is inexorable. In the case of spools made of recycled plastics for the current one, all the overspods are ground and recycled, without the need to repeat the energy-consuming recycling process

The startup is currently conducting a series of advanced talks with potential partners from Europe and other regions around the world. The first filaments of well-known manufacturers will soon to be found on Green-Spool. 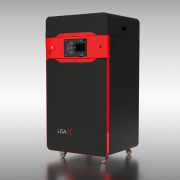