Shining 3D is a well-known company in the world that produces 3D scanners characterized by high quality of work and a relatively low price. The Chinese manufacturer also offered a very wide range of industrial 3D printers, printing in all “most important” technologies, such as SLA, SLS or SLM. Hardly anyone knew, however, that Shining3D’s subsidiary EPlus3D was actually behind the line of 3D printers. Now companies officially split up – EPlus3D becomes an independent company and will independently provide solutions for industrial 3D printers and after-sales service directly to customers worldwide.

EPuls3D will strengthen its position as an independent brand through its own overseas offices. Investments in research and development, marketing, sales and after-sales service, as well as a new manufacturing facility in Hangzhou, China, will help EPLUS 3D to pursue its mission to further industrialize 3D printing.

Interestingly, in the period when Western companies merge or make acquisitions (see Desktop Metal, described many times), the described Chinese companies split up to deal more effectively with Western markets. Something similar happened recently with France’s Prodways and China’s Farsoon, when the latter, the Western market provider SLS Prodways, ended its distribution agreement and became a fully independent company. 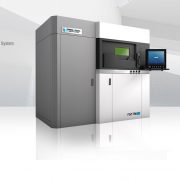