On 14.01.2016 in Technopark in Łódź, Poland, we celebrated CD3D Awards Gala 2015. We rewarded representatives of Polish and international 3D printing industry. It was the second edition of our plebiscite. One year ago we awarded the winners during The Days of 3D Printing in Kielce, in March 2015 – now we had a pleasure to organise our own ceremony.  On a daily basis we are humble and we maintain a healthy distance from out projects, we have to write it outright – this ceremony was just epic!

In conference hall in Technopark there were about 90 guests – representatives of Polish 3D printing industry and special guests od CD3D: represantives of media and colleges. A special guest of the ceremony was Patrick Roeffen – Channel Sales Manager in company Ultimaker – the biggest producer of low-budget 3D printers in Europe.

Moreover, there were presented premire devices: Ultimaker 2+ and 2+ Extended and MakerBot Replicator Z18 equipped a brand new najnowszy SmartExtruder. Both Ultimakers and MakerBot had their world premieres one week before on  CES trade in Las Vegas in USA.

We didn’t forget about Polish accents – 3DGence, one of the official partners of the Gala, presented its three newest models of 3DGence 3D printers – 3DGence One;  Smart3D – the second of four partners of the Gala, showed in public its fastinating  produkt – Pixelio,  for which it gained a bailout on Kickstarter in December 2015.

The ceremony started at 10:15. We presented all of the 15 categories and we gave 39 prizes – first of all 13 Cedryk statuetes for the first place in each category. The main prize was created in two different 3d printing technologies. A figurine of a robot was printed by Materialise in SLS and pedestals were printed by us in FDM on 3D Gence One printers, using PLA Special Stone Age Dark filaments produced by produkcji Spectrum Filaments which imitates marble. 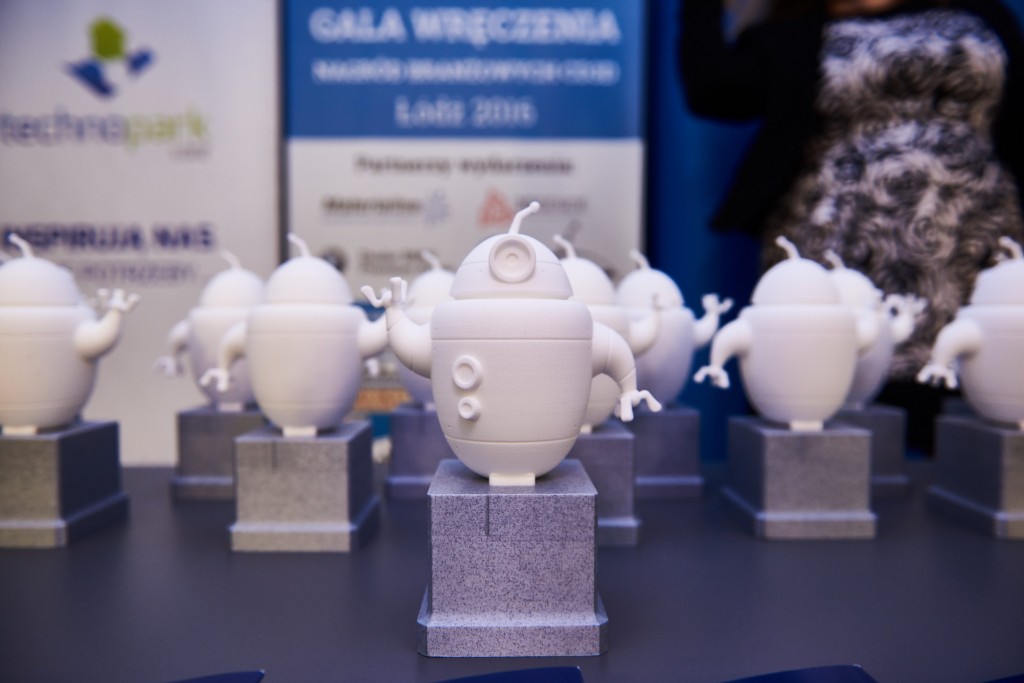 Firstly we rewarded freign companies. A statuete for company colorFabb which the second time in a row gained the main prize for the best foreign producer of filaments, collected Adam Kozubowicz from get3D – an official distributor of the brand in Poland.. 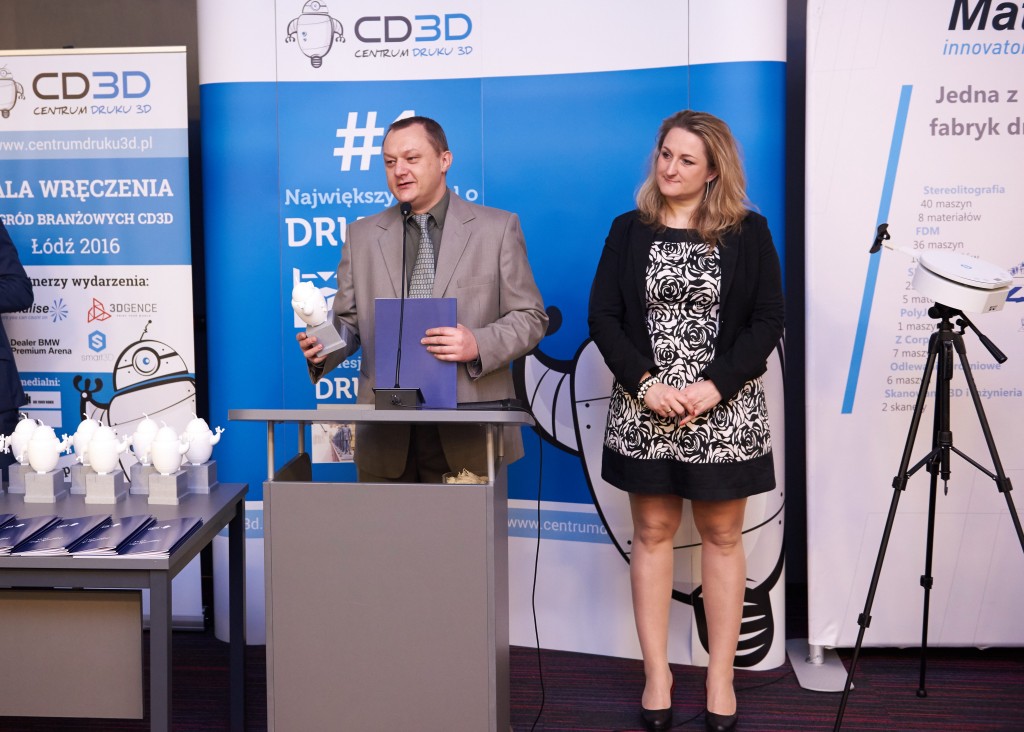 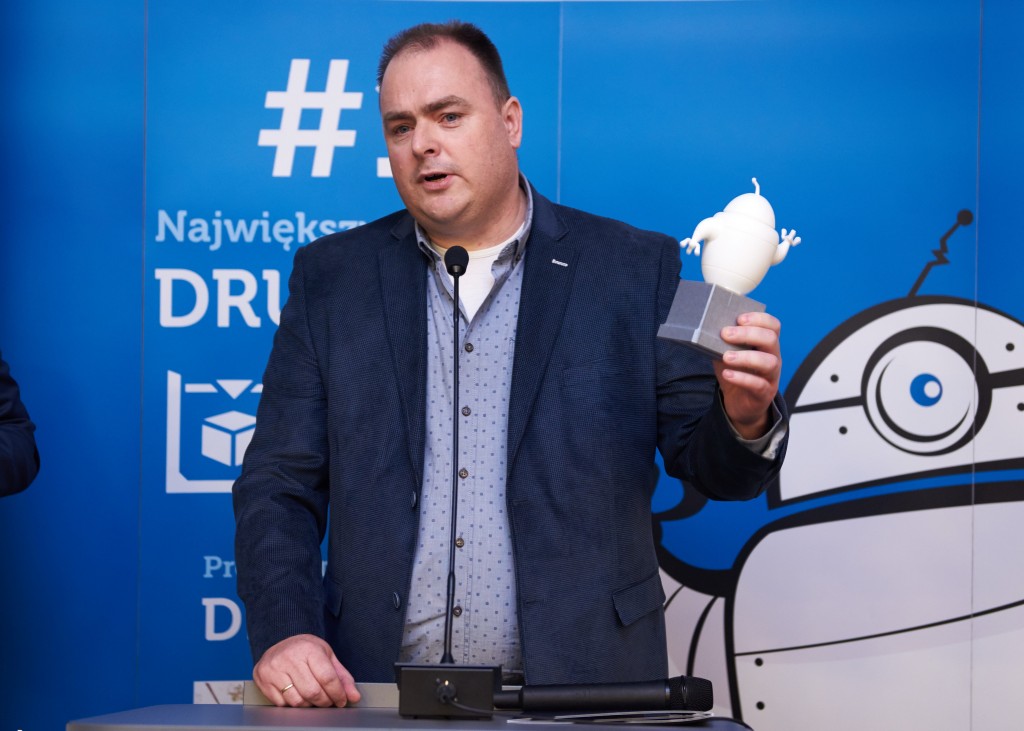 The most important event in 2015 in 3D printing industry was Days of 3D Printing in Kielce. 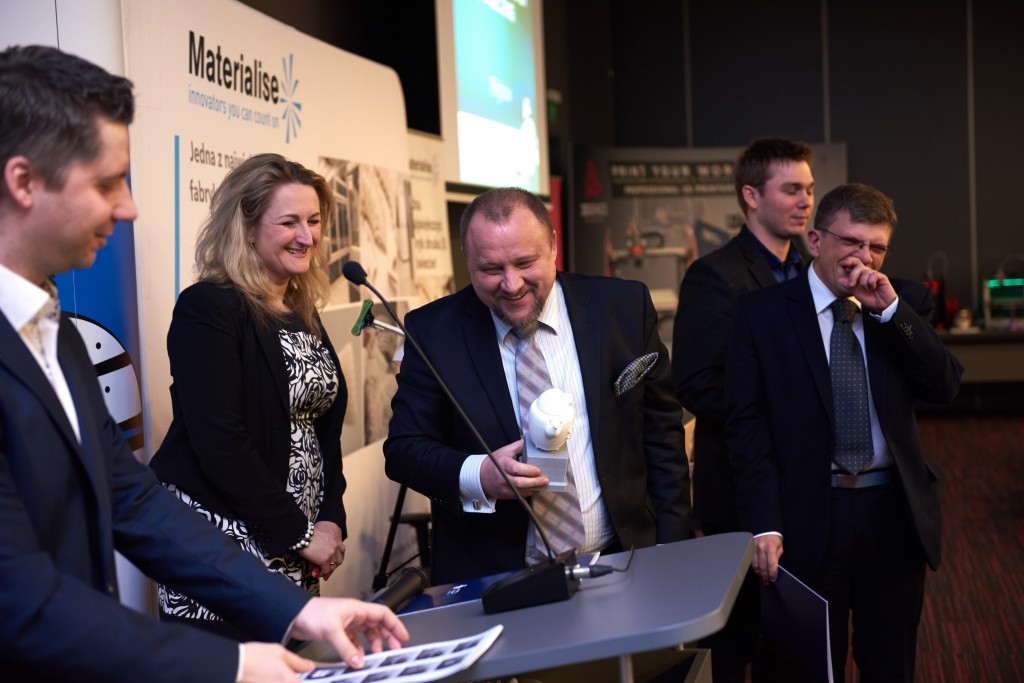 Janusz Wójcik is taking his prize. In the bacground: Paweł Rokita i Mateusz Sidorowicz (3DGence)

The best services company in 2015 became Materialise Polska from Wrocław. The second place of company IJ Paliga was a quite big but very possitive surprise. 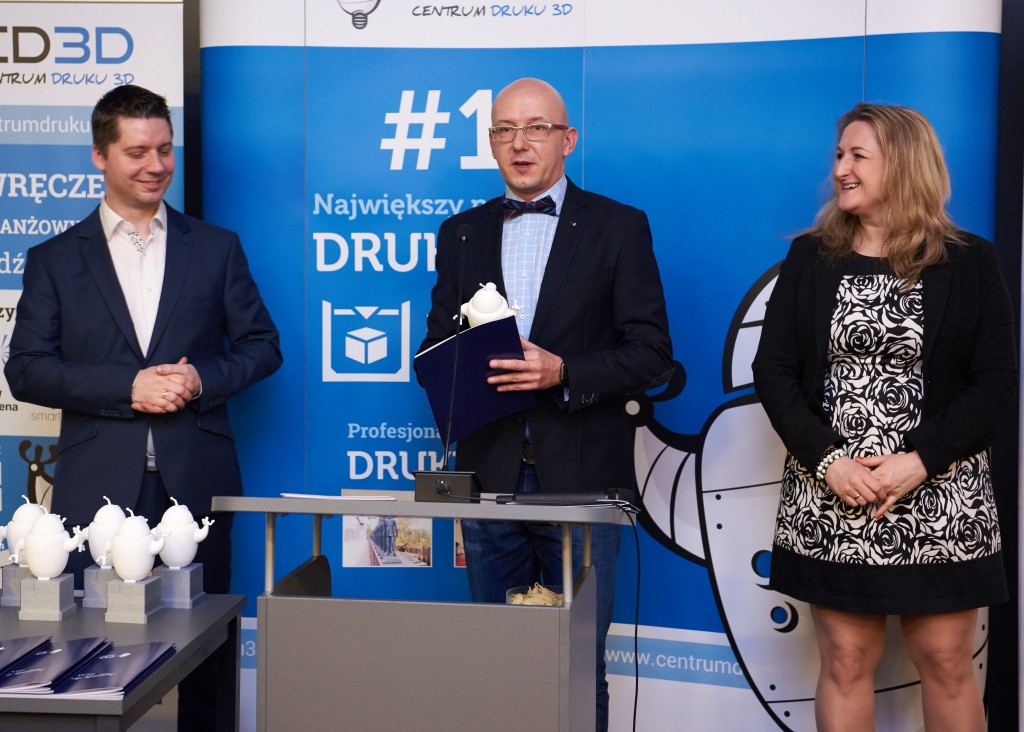 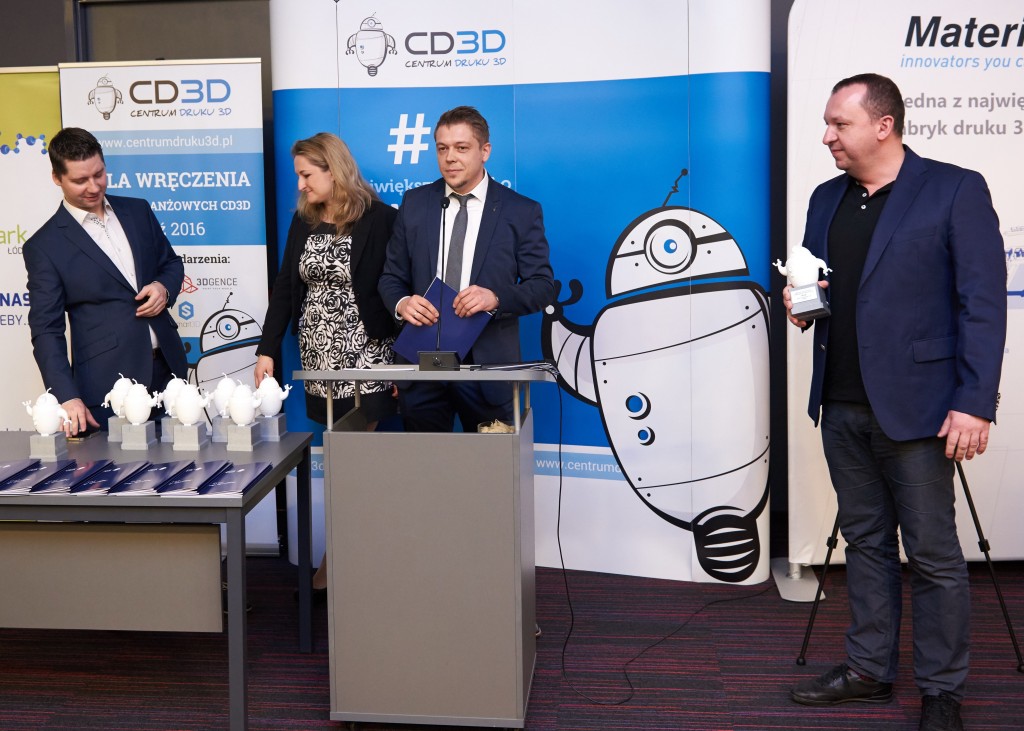 The biggest competition took part by choosing of the best distributor od low-budget 3D printers and filaments in Poland of 2015. An unexpected winner in this category became ABC Data, the second place – like one year ago -CadXpert, and the third place for the las year’s victor in this category – get3D.

The best producer of filaments in Poland in 2015 became Spectrum Filaments.

The prize for the best Polish 3D printer of 2015 went the second time in a row to Zortrax. 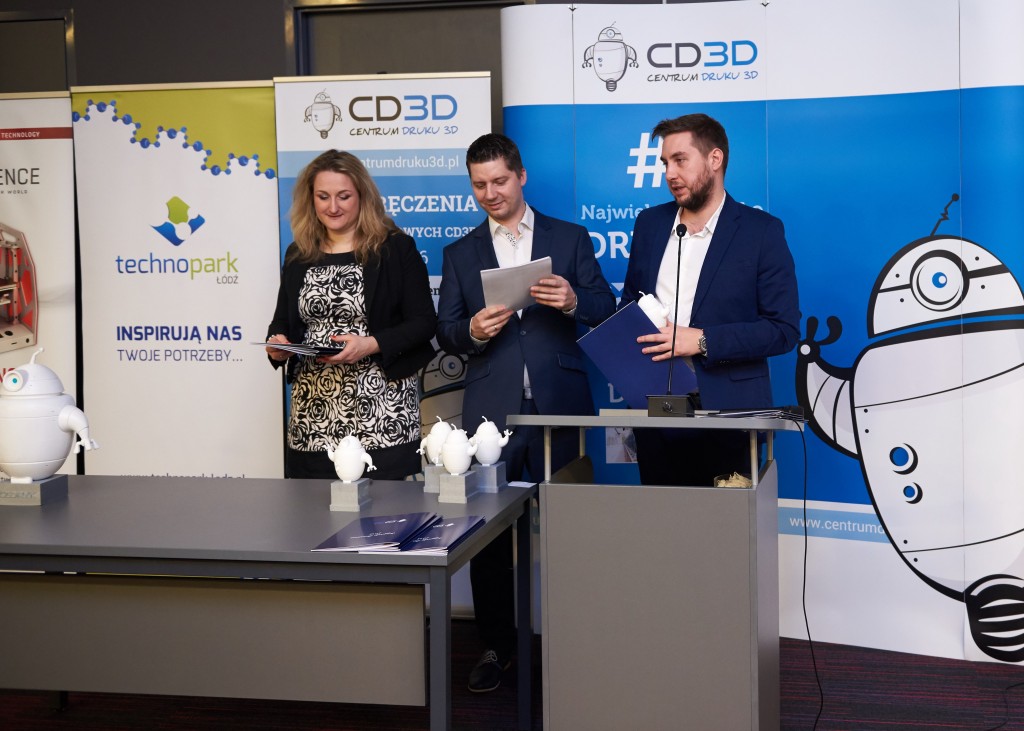 The best new Polish company of 2015 became Spectrum Filaments – one of the biggest victors of the ceremony. 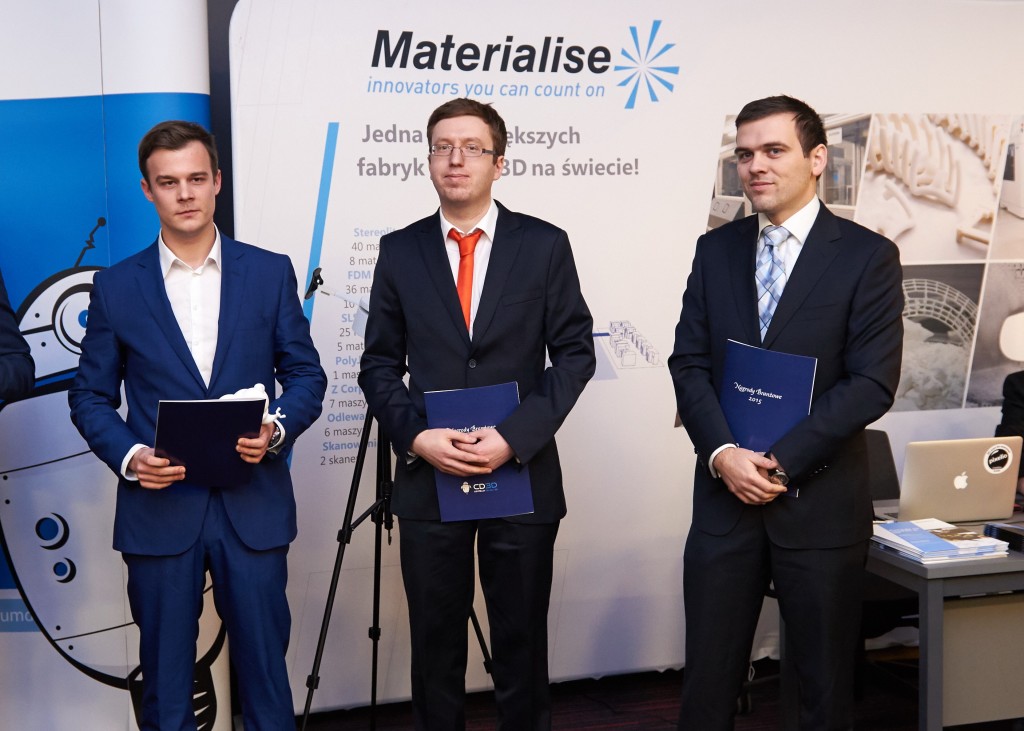 Two last prizes went once again to Zortrax – the title of the best company of 2015 and the man of 2015 for Rafał Tomasik (the prize was received by Tomasz Frąckiewicz, Rafał Tomasik was then on a business trip to China). 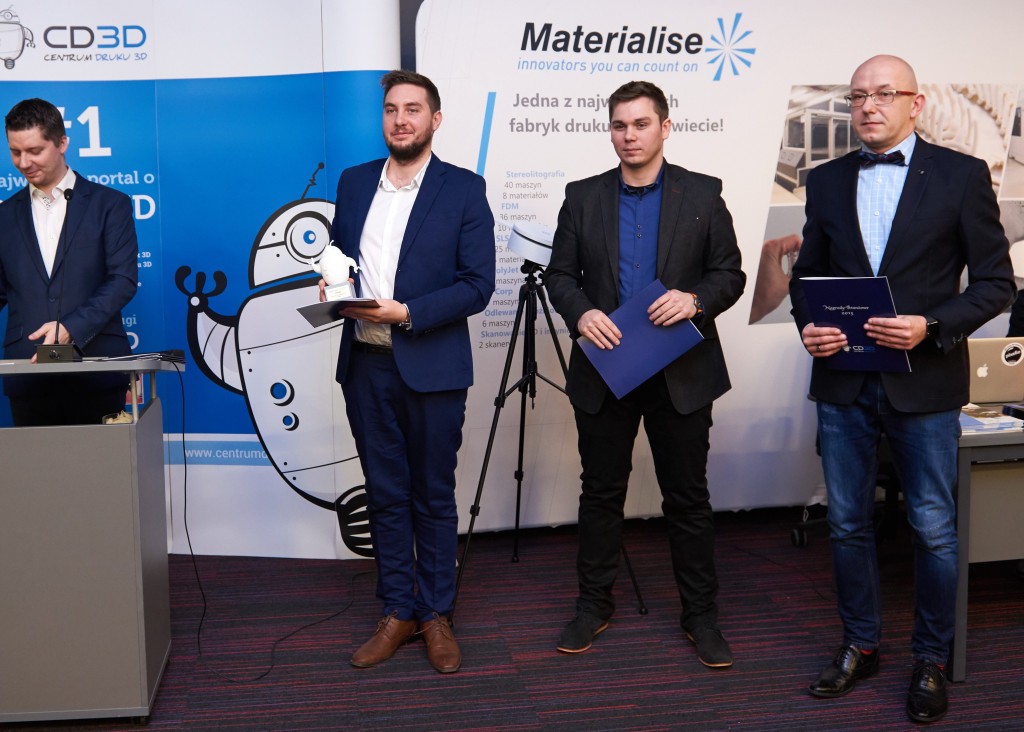 After prize-distribution we made a brake during which several representatives of the guests used for networking and buisiness negotiations. Although we don’t know the details, we know that during the ceremony a few contracts were signed during quite spontaneus buisiness talks. In the meantime a press conference was held.

After diner we went back to conference hall, where we started with the next part of Gala – lectures. At first a representative of BMW Premium Arena gave a speech, in which he spoke about the newest offer of the company and invited to driving tests which took part during the whole event.

The next speaker – Mateusz Sidorowicz from 3DGence, in his fantastic lecture presented the history of the company – from the startup which hadn’t been known to anybody to the production company of over 30 people. The most important were details of cooperation with Michałem Sołowow – one of the richest people in Poland, who in autumn of 2015 became officially a co-owner of the company. We will describe this incredible story soon… 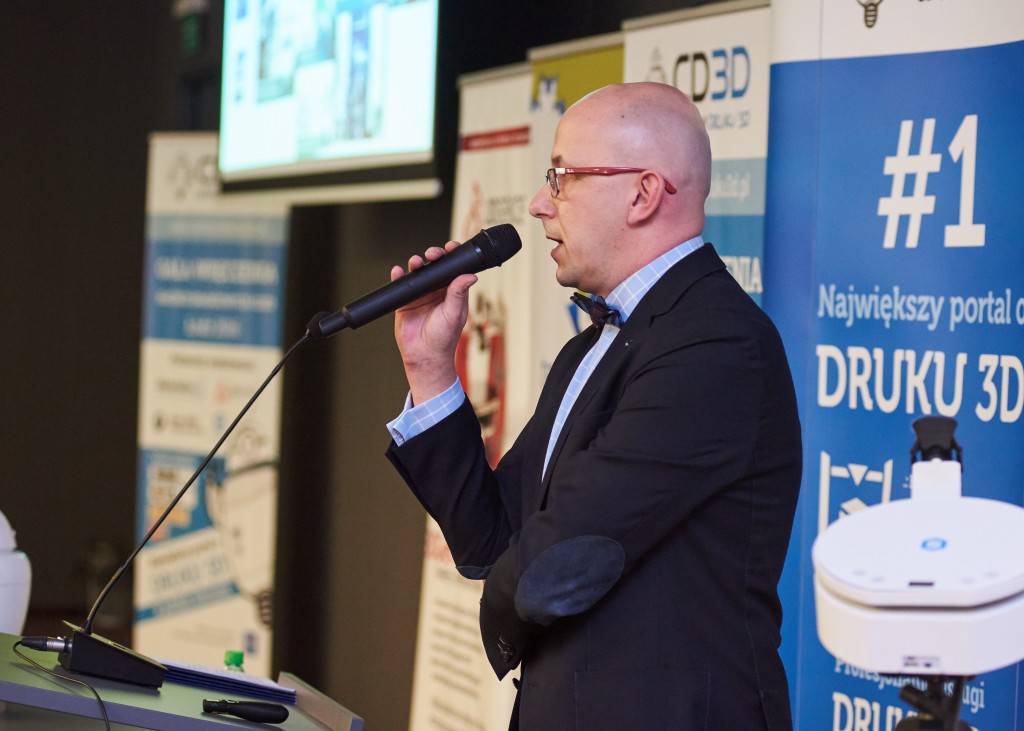 After Materialise  Sebastian Adamek, Kryspin Kozłowski and Tomasz Krupnik – the Smart3D team – creators of Pixelio took the floor. Pixelio an extraodrinary device which helps to create 3D scans or panoramas using a smartphone. The device works with Memento software on Autodesku. Sebastian, Kryspin and Tomasz talked about the details of gaining a bailout on Kickstarter in amount of 46 thousands GBP and presented advantages of Pixelio and talked about their new products – a new steering to 3D printers.

After lectures our guests took part in a debate about the history of Polish 3D printing industry – its begining, present state and the future. In the debate participated crucial personalities of Polish 3D print – Krzysztof Dymianiuk, Bartosz Barłowski, Paweł Twardo, Tomasz Zwolan, Janusz Wójcik and Paweł Rokita. During the debate you cuold have hear about the starup in the industry, the first 3D printers, and new visions of 3D printing and averything which is connected with it, for example – its current state on the market. After the debate the lecturers were attacked by a stream of questions.

The debate finished an official part of the Gala. Some of our guests went home, some of them went to afterparty. Our guests who didn’t take part in it can only regret it. Our guests who were there with us can be grateful to not publishing the pictures from the party… So, it was just epic!  We hope that next year we will make such an awesome party, or even harder!

Business Awards of CD3D in 2015 – results and winners