More and more companies in the footwear industry are looking for areas where they can use the potential of 3D printing technology. We are talking not only about the giants of the production of sports footwear such as Adidas or Reebok, but also about smaller manufacturers who also want to keep up with the latest technological trends.

Among them is Camper, one of the most successful young companies in Spain. Every year, the company sells up to four million pairs of shoes. At the same time, they are associated with innovative designs that contribute to increasing the comfort of using subsequent models of their footwear. In their work, they use 3D printing technologies that optimize the process of designing new shoe models and creating functional prototypes.

At the headquarters in Inca, Mallorca, the company has implemented several BCN3D 3D desktop printers, thanks to which they not only managed to reduce costs, but also shortened the time between the project and the launch of the new collection. What is the process of creating shoe models from the latest collection?

Camper specialists set a deadline of three months to create a new collection. With such a busy schedule, they had to find a solution that would allow them to quickly and economically create several iterations of design models to find the optimal solution. At the same time, they wanted the created models to be characterized by repetitive, high quality workmanship, so that they could be verified using the possibility of meeting customer requirements.

However, own 3D printers were not an obvious choice for the company. Initially, an external company was commissioned to make prototypes using standard methods, but due to the long waiting time (up to two weeks), the number of model iterations was reduced to a minimum. For this reason, the selection of the most suitable variant was made on the monitor screen, which did not fully meet the requirements of the project team.

The installation of two BCN3D Sigma and Sigmax 3D printers in the office has completely changed the team’s approach to design – now designers can discuss ideas and proposed workmanship with engineers from the technical department who transform these ideas into 3D models and deliver ready prints over the next 24 hours. For designers, this is a huge simplification because they can check the physical properties of the proposed solutions on an ongoing basis and easily apply corrections in subsequent iterations. This gives them much greater design freedom, which is why they are not afraid to propose more creative and bold projects, without feeling wasted time and unnecessarily generated costs.

According to Jordi Guirado, product engineer at Camper, the double-head 3D printing system that BCN3D devices are equipped with makes it possible to use water-soluble support material. This allows you to create models with even more complex geometries.

This is another example of a company that by implementing 3D printers has reduced costs while gaining a number of added values. For Camper, 3D printing technology has increased the creative possibilities of designers, which goes hand in hand with the significant acceleration of the stage of designing new products and introducing them to the market.

Christmas guide – how to make a “Baby Yoda” bauble? 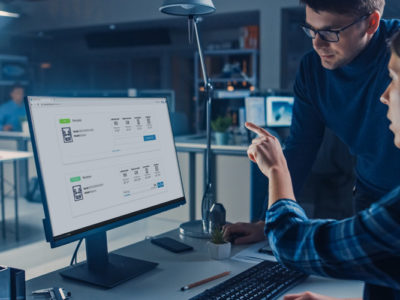 BCN3D raises EUR 2.8 million for the development of its devices