During the SOLIDWORKS WORLD 2017 conference, Stratasys presented a new line of 3D printers that shook the 3D printing industry in the whole world. Until then, the company was associated on the one hand with the production of high-budget industrial devices printing in FDM technologies (Fortus line) and PolyJet (Objet line) and low-budget FDM 3D desktop printers – MakerBot. The newly introduced F123 line was created to fill the gap between cheap desktops and expensive industrial machines.

While looking at the new 3D printers live for the first time, I understood how high Stratasys raised the bar for other producers of similar machines, targeting the budget segment. The machines of the F123 series at first glance were not inferior to the expensive systems of the Fortus series, being, in a sense, their cheaper counterparts. By “cheaper” I do not mean, of course, the quality of the components or construction solutions used, but the production capabilities and the palette of consumables that can be used in them.

In the summer of last year, I visited the authorized Stratasys distributor in Poland – the Krakow-based company CadXpert, which resulted in an article describing the functioning of the photopolymer 3D printer Objet 30 Prime. At the same time I spent some time with the Stratasys F370 – the most expensive and the most advanced of the F123 series, confirming previous observations. Today, we will take a closer look at this 3D printer and we will follow the process of preparing models for 3D printing and printing. 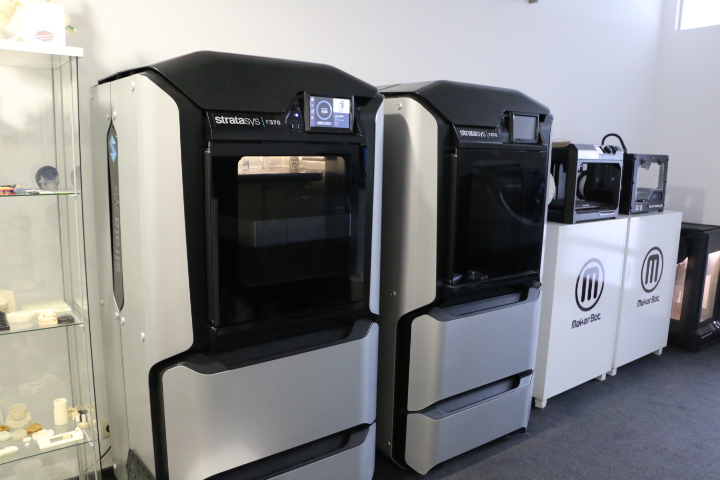 Stratasys F123 is a family of 3D printers, which include models: F170, F270, F370. In individual models, almost identical technological solutions were used, and the working area, the number of filament rolls, which we can install at the machine and the types of material that can be printed, are differentiated. Work areas are:

In the article, we describe the work on the highest model – F370.

An important feature of the Stratasys F123 series is that, unlike the more expensive models, they are perfect for office environments due to their quiet operation and ergonomic design. 3D printers are used for rapid prototyping, creating functional prototypes and conceptual models, as well as low-series production.

3D printer prints from thermoplasts in the form of a line in FDM technology. This method was developed and patented in 1989 by American Scott Crump, who founded the company Stratasys – today the largest company producing additive devices in the world. F123 3D printers stand out from other devices of this type with solutions known from the Fortus production series. 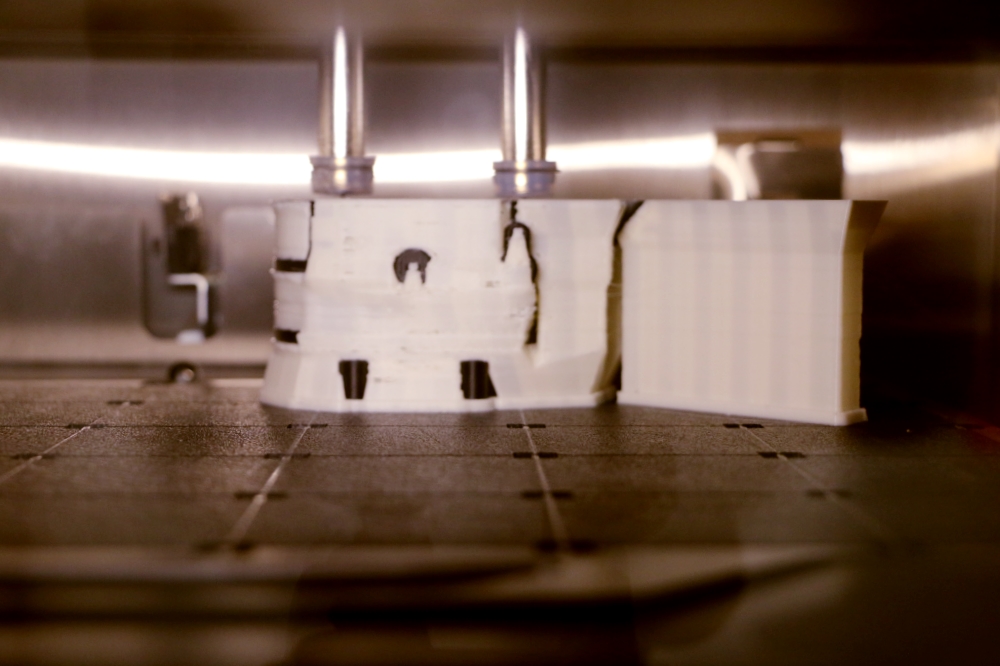 In the mechanical system, servo drives were used to ensure stable operation of the device. The heated working chamber maintains a constant temperature thanks to the double glass in the door. This translates into quality and repeatability of prints supported by ISO certificate.

Preparing a 3D printer for work

The machine uses two types of materials: building and supporting materials. The materials are applied using two independent heads. After printing, support structures are dissolved in a dedicated, automatic washer. 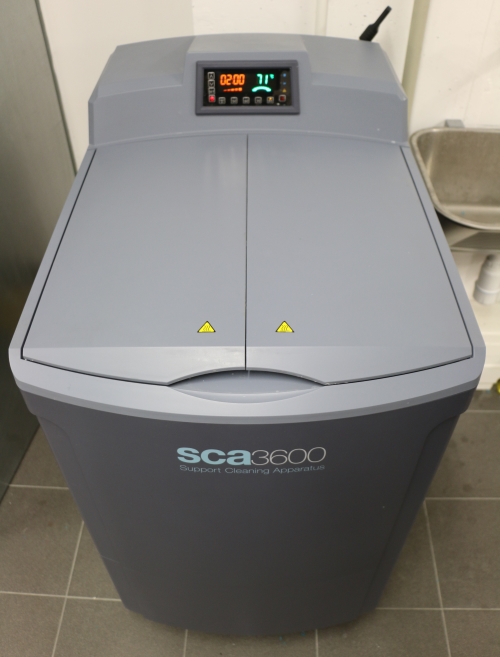 The materials are placed in containers that at the same time protect them from moisture. For the F270 and F370 models, the manufacturer introduced space for two additional spools of building material and supporting material. If the material from the first roll is finished, the 3D printer automatically downloads the second material, which guarantees the continuity of the device operation. The material can also be replaced manually during the 3D printing process. 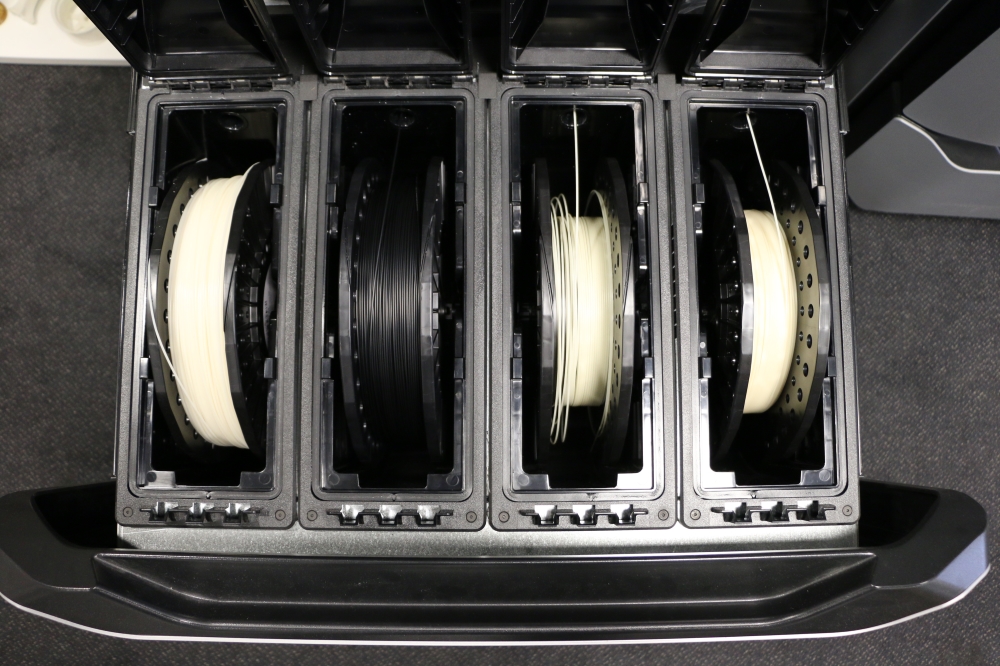 Loading materials is quick and easy. After placing the spool with the material in the container, the 3D printer automatically pulls the material into the system. Then, with one click on the screen, the material is loaded into the head. 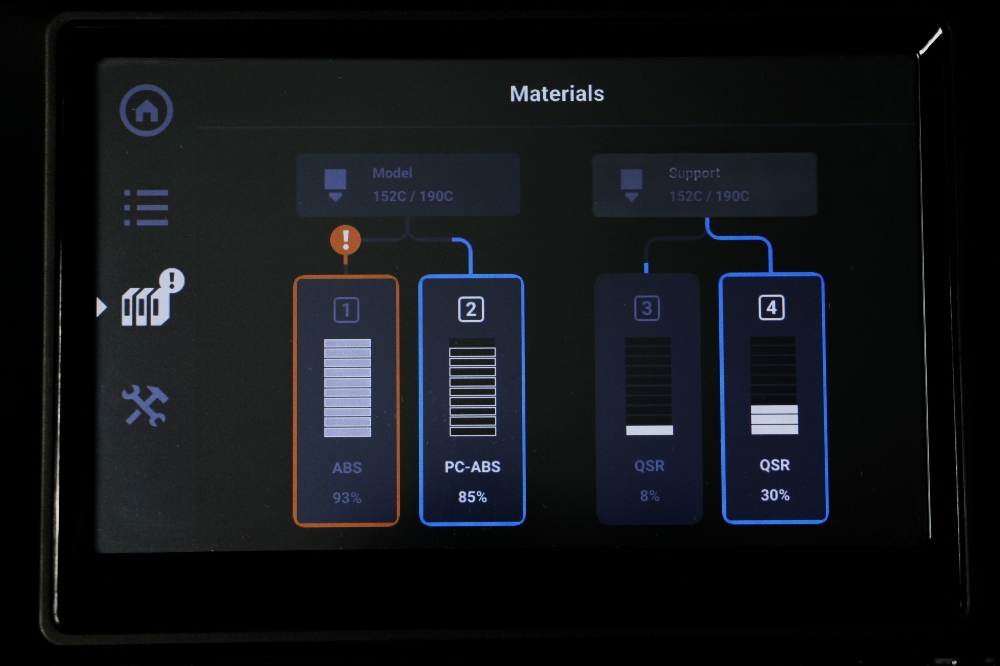 The process takes about 2 minutes. The status of materials is displayed on a touch screen, on which all information (type, color and amount of material) is shown.

Optimization of models for 3D printing

Stratasys F370 uses dedicated GrabCad Print software, which is able to work with many types of files, including .STL, .STEP, .IGS etc. Even the entire assembly can be loaded into it, which the program will spread on the work table itself – and if necessary, even divided into several independent work tables. 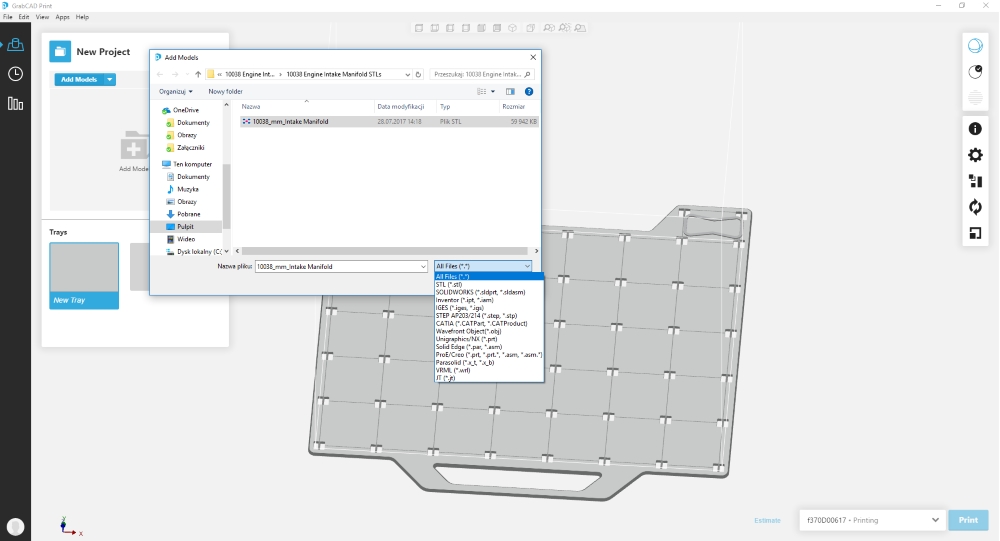 After uploading the file, GrabCad Print checks if there are any errors in the files, eg mesh discontinuity? If the file has a defect, it can be removed with one click. The user influences the most important print parameters: layer height, fill structure, type of supports and material grade for 3D printing. The other settings are automatically adjusted by the 3D printer after uploading the model to the device. After generating the file, the program generates visualization of the model. You can cut it along the layers to see how it will be stacked. Of course, we also receive information about the amount of material needed and the time of printing. 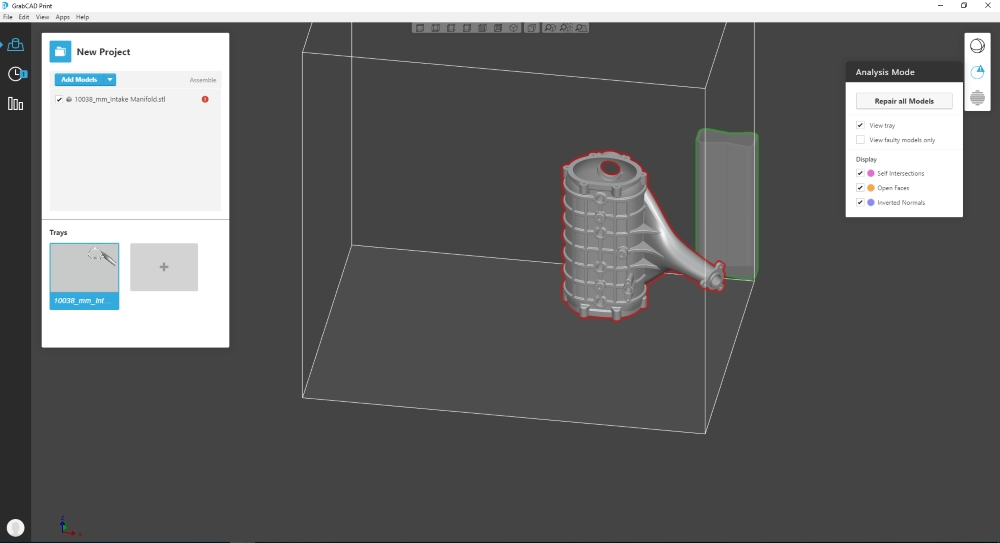 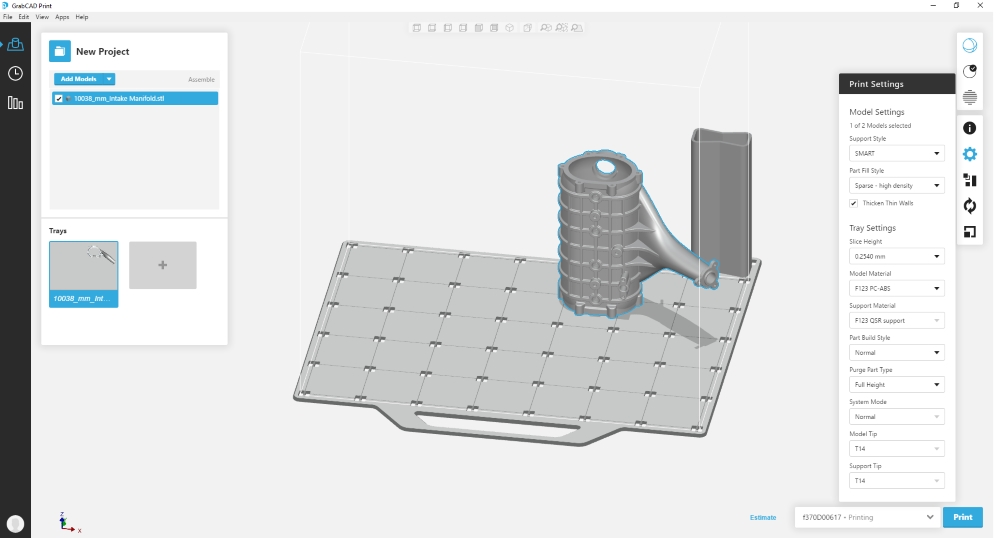 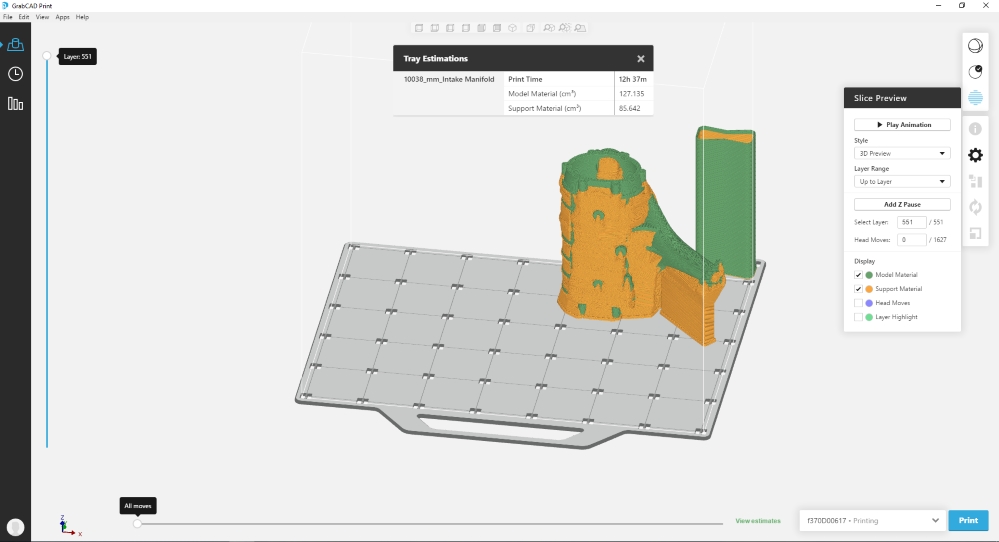 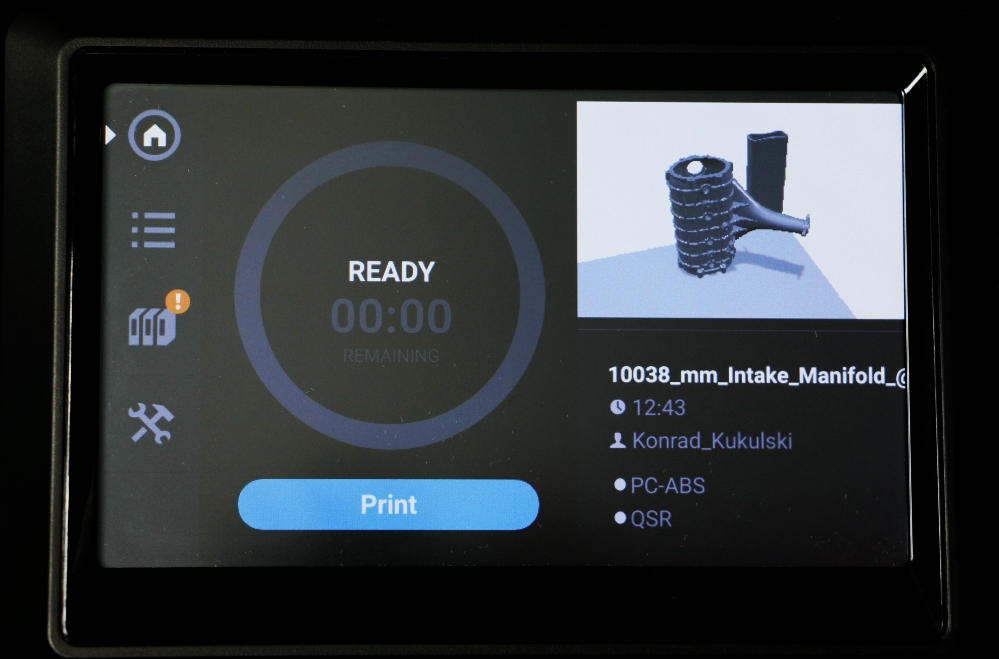 Production files are sent via Wi-Fi, Ethernet or via USB memory. After uploading the file, the information appears on the device screen in the queue menu. The uploaded file is ready for 3D printing.

The warm up time of the machine is quite short and lasts no more than 5 minutes. During this time, the device not only heats the print head and work table, but also the chamber itself to a level of 90°C. After finishing the production process, the detail can be removed from the working chamber. 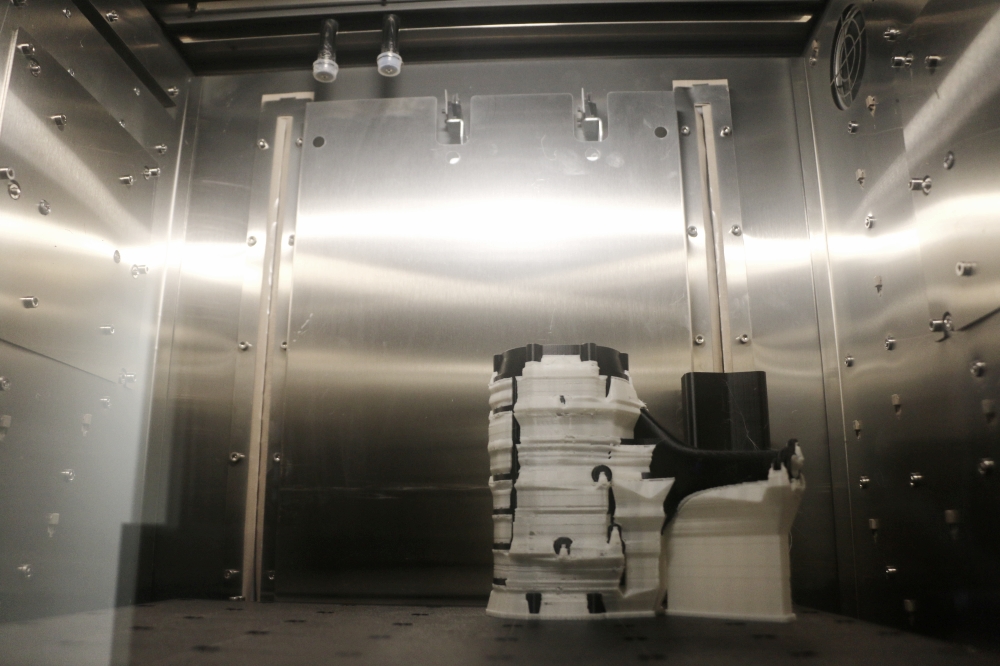 Thanks to the removable tray made of ABS material, the detail can be easily removed from it. The next step is to place the model in an automatic washer where the support material will be dissolved. The standard time is about 2.5 hours. 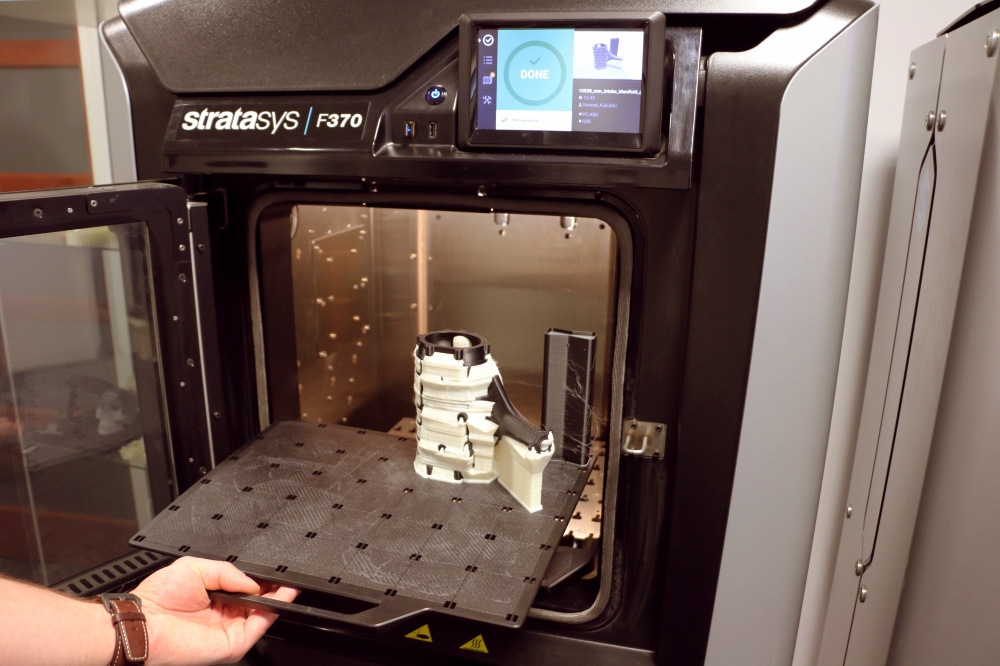 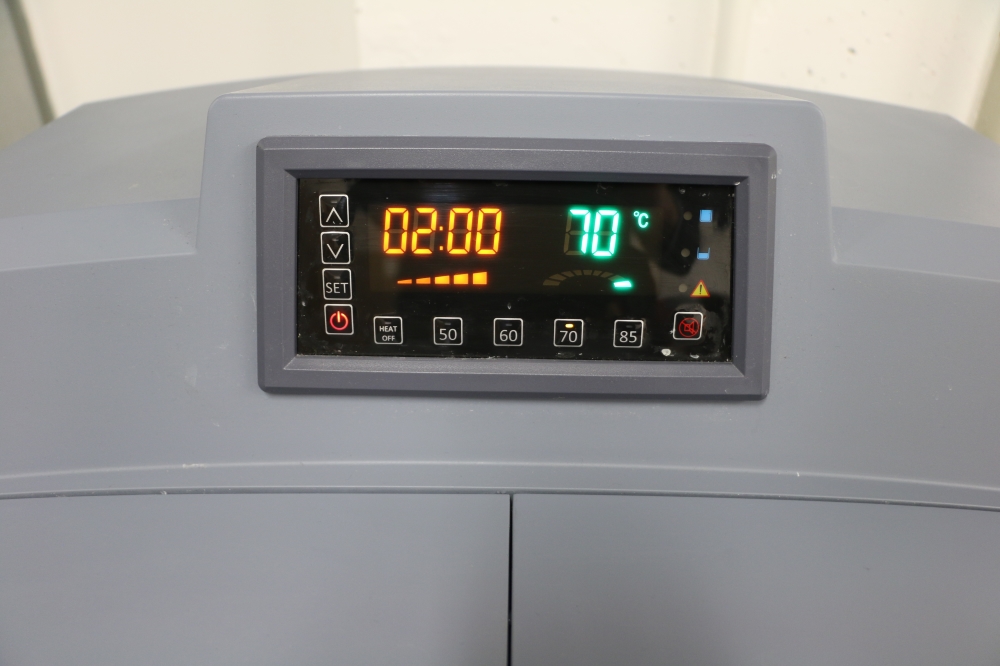 The washer works quietly, so you can place them both in the utility room or warehouse, as well as in the office. After removing the detail from the washer, the model is ready for use. 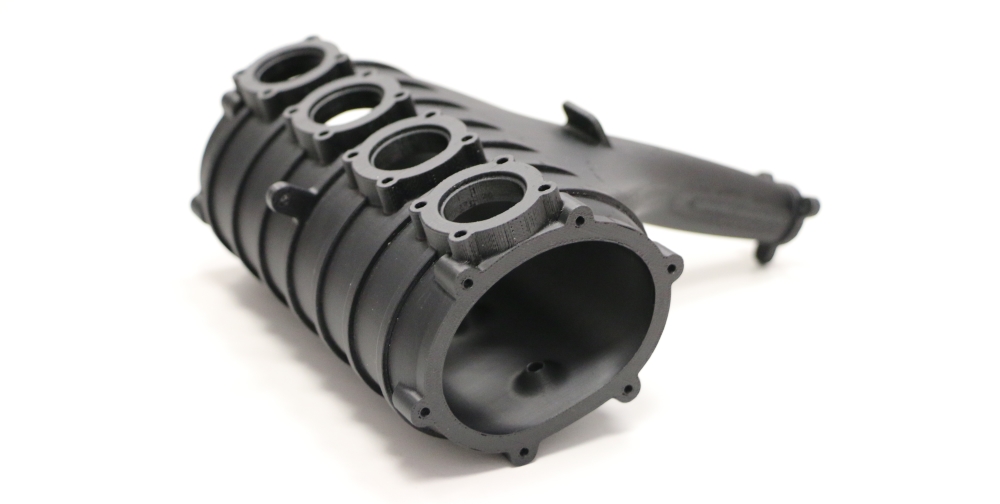 America burns and Stratasys is firing 10% of employees

The non-weakening COVID-19 pandemic, an economic lock-down, which results in a huge increase ...