ZMorph VX is the flagship device of the polish manufacturer of multifunctional 3D printers from Wroclaw. Solid structure, authorial software and repeatable quality of 3D prints contribute to the growing popularity of ZMorph solutions. Can their devices compete with 3D printers from the most popular manufacturers?

Today we will take a closer look at the Full Set version of the ZMorph VX 3D printer. Together, we will go through the next stages of work – from unboxing, through the first launch, to the finished 3D printing. This article is the first in a series of articles about the ZMorph VX device, which is an introduction to working with the device.

Let’s start with what is ZMorph? ZMorph VX is a multifunctional 3D printer that goes beyond the standard 3D printing framework, giving the possibility of using the functions of a laser plotter and CNC milling machine. The device is also compatible with a wide range of materials. The availability of a vast collection of consumables and various methods of 3D manufacturing make the ZMorph VX universal and versatile. The exclusive distributor of ZMorph 3D printers in Poland is SEB-COMP.

Time for unboxing. After opening the box, we are shown accessories arranged in foam shadow trays. The top salver holds accessories for the ZMorph VX, such as a replaceable laser toolhead, protective equipment and spools of dedicated material.

Below there are more tools from the accessory kit. All of them have their place in foam trays, so we do not have to worry that the elements will be damaged or lost during transport. This is also a cushion for the 3D printer itself.

At the bottom of a quite large box there is a 3D printer. The device is packed in a set of protective foams, which protect it against damage and keep it safe during the transport. Cannot be hidden – the device is pretty heavy. A solid, metal structure ensures the stability of the device, both during 3D printing and other operations (such as milling).

After removing the protective parts, the 3D printer is (almost) ready to go. It does not require self-assembly – the only part that you need to attach yourself is the filament roll holder. This can easily be done with the use of the Allen key included in the accessory kit.

To sum up, in the Full Set set, in addition to the 3D printer, you will find:

Let’s move on to the technical details of the device itself. The machine is operated via the LCD touch panel, which serves as a graphical interface for operating the machine in stand-alone mode.

G-codes are transferred to the device’s memory via an SD card. ZMorph VX can also work with a computer on which special control software is installed. Operation is managed via a USB cable.

The device has a system of interchangeable heads, enabling printing from one or two filaments, CNC processing, laser or 3D printing from thick pastes. Thanks to the closed working chamber, ZMorph VX can work with more advanced materials, such as ASA, which require maintaining a constant temperature during the process. The closed working area prevents the occurrence of unfavorable phenomena, e.g. material shrinkage, delamination or deformation caused by material shrinkage.

When starting the work with the ZMorph VX, remember that the machine should be located in a well-ventilated room, as some materials may emit harmful, toxic fumes during 3D printing. Additionally, the place where the ZMorph VX is working should be dust-free and dry, as the device has no protection against moisture and air filters. This is especially important when we also intend to use a milling head.

After starting, the start screen appears on the 3D printer LCD display, from which we can go to 3D printing or maintenance works.

Before we move on to 3D printing, it is necessary to calibrate the working table. The device has two calibration modes – automatic and manual.

For best results, print the calibration pattern by selecting “Start”. Before this happens, the 3D printer must heat up to the PLA printing temperature (head 200 C, worktable 60 C). When the temperature is reached, choose the “NEXT” option. Then load the material into the print head and press “NEXT” again.

Now, you have to wait for the machine to finish printing the pattern. When the 3D printing of five lines is finished, it is necessary to assess which of them was 3D printed with the appropriate quality (from 1 to 5).

The 3D printer is compatible with the proprietary Voxelizer software, which is used to manage 3D printing, CNC and laser. Thanks to it, it is possible to cut models, generate G-codes and send them to the device. The software enables you to quickly optimize models using 3D filters and intelligently create support structures.

Additionally, Voxelizer allows for image mapping, enabling images to be printed from bnp and bitmap files. The ZMorph VX device also supports other software such as Slic3r, Cura, Simplify3D), however, they may not use the full potential of the machine.

Voxelizer is free – we receive the license code with our 3D printer.

We will probably devote more than one article to the software on the 3D Printing Center. now let’s move on to the preparation of the model. The model in .stl or .step format can be uploaded to the software by clicking the Import option or by dragging the file onto the program screen.

Voxelizer guides us through the stages of preparing a 3D model. After uploading, the model should be oriented on the surface of the working table …

… and then set the parameters of the 3D printing. Voxezlizer is adapted to the needs of advanced users as well as those at the basic level. The user can choose whether he needs a few basic 3D printing parameters or wants to use the full potential of the numerous options available in the program. The software also makes it possible to generate supports adjusted to the requirements of both the project and the user. The model prepared in this way is then transferred to the language of the 3D printer, i.e. g-code.

The ready g-code should be recorded on an SD card and placed in the slot of the 3D printer. A few clicks on the touch panel and the 3D printing begins.

You can see the effects of our first 3D prints below. Below is a model of a door handle with generated light support structures.

In the following parts of the series, we will discuss in detail the operation of the device and dedicated software. We will also focus on potential applications of ZMorph 3D printers and applications in which they may prove particularly useful. 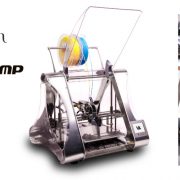 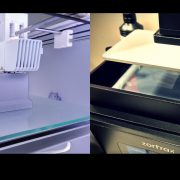