nTopology, the software developer for optimizing part geometry for 3D printing, has raised $ 65 million in a new D-series funding round from New York-based investment firm Tiger Global Management. Other participants in the financing round include the New York capital development company Oldslip Group, as well as current investors Root Ventures, Canaan Partners VC, Haystack and Insight Partners. The funds will support the expansion of the design platform into new applications and international markets and raise its valuation to over $ 140 million.

The company, founded in 2015 by Bradley Rothenberg and Greg Schroy, develops software enabling the creation of lightweight parts, optimized for given manufacturing technologies – in particular 3D printing. Its flagship software, nTop Platform, was launched in 2019, controlling all models and useful in a wide range of applications including aerospace, automotive, medical and consumer products.

nTopology works with over 300 customers, including Ford, Lockheed Martin, Honeywell, Emerson, and Wilson. The company’s technology is based on product development, combining the 3D modeling process with advanced computational processes, enabling the generation of extremely difficult to design geometric parts.

After raising more than $ 10 million between 2016 and 2017, the company secured another $ 20 million in 2019 thanks to the Series B round hosted by Californian-based Canaan Partners. In 2020, it raised $ 40 million from Insight Partners to further develop its software and reach a wide audience. To date, nTopology has raised a total of $ 135 million. 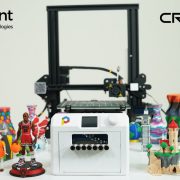 3D Systems publishes financial results for the third quarter of 2021