On the one hand, Markforged is one of the most dynamically developing companies in the segment of industrial 3D printing, on the other, its history is marked by a series of patent disputes, which it conducts with its rival from behind the Boston area – Desktop Metal. It turns out, however, that this is not the only company with which it fights in the patent field. Markforged’s new opponent is Continuous Composites – a manufacturer of robotic 3D printers for composite materials, based in the northwest of the USA in the state of Idaho.

As reported by 3D Printing Industry, the history of the patent dispute began in July last year, when Continuous Composites filed a lawsuit against Markforged, accusing the company of breaching four US patents:  9,511,543, 9,987,798, 10,744,708 and 10,759,109. The first patent is dated December 2016, the last one is September 2020, and Continuous Composites says they are part of a larger group of nine patents and two pending patent applications that predate Markforged’s existence and include key technologies to its business.

In the lawsuit, Continuous Composites claims that Markforged has infringed patents related to the processes and 3D printers that underpin the operation of the Mark Two, Onyx Pro, X5 and X7 systems. The patents refer to a technology called CF3D, i.e. continuous fiber 3D printing, where two or more materials are extruded simultaneously while being embedded in a liquid material. Continuous Composites adds in its process documents that the process involves curing the liquid material after extrusion in a way that gives the printed parts enhanced capabilities not possible with a single material.

Continuous Composites says its patented technology was used in products that accounted for the bulk of Markforged’s revenues of $ 270 million. As a result, the company is demanding financial compensation as well as an injunction to prevent Markforged from infringing on patents in the future.

Markforged called for these claims to be rejected, saying that its technologies are different from patented, and where there are similarities they rely on unpatented ideas. In the statement sent, inter alia, to 3D Printing Industry, the company refutes individual allegations, saying:

Markforged is confident enough to make a counterclaim in court, seeking a jury trial to find that its products do not infringe any claims against pending patents. Additionally, the company wants to annul them all. Continuous Composites did not comment on these claims, so the case is developmental… 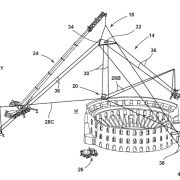