One of the world’s largest trading platforms – Alibaba Group Holding Ltd. and the Chinese manufacturer of amateur 3D printers – Tronxy Technology Co., were sued by the parents of Calvin Yu – a man who died in 2020 in a fire caused by a FDM / FFF 3D printer by Tronxy . The 3D printer was purchased on the Chinese shopping portal AliExpress owned by Alibaba.

A native of San Francisco, USA, Calvin Yu purchased the Tronxy 3D printer in November 2019. According to his parents, he only used it at home “as intended”. In 2020, a fire broke out in Yu’s house, resulting in Calvin’s death. According to investigators investigating the case, the 3D printer overheated and caught fire, and the fire moved to the couch where the victim was sleeping. Last week, Calvin Yu’s parents filed a lawsuit in a San Francisco court, accusing Alibaba of selling a 3D printer they knew or should have known was defective, as well as Tronxy Technology for producing and selling the defective machine.

Media reports that customers are increasingly trying to hold e-commerce platforms accountable for the goods they sell, even if they come from third parties. Over the past few years, Amazon has faced dozens of lawsuits involving liability for sold products from people who have been harmed in various ways. Last September, Amazon set up a new policy whereby it will pay buyers for damages or property claims under $ 1,000 (and in some cases even more), even if it has argued in court that it is not directly responsible for it.

San Francisco court to decide how the trial against Alibaba and Tronxa develops? Basically, in the case of FDM / FFF 3D printers, caution is always required in use due to the high temperatures involved in the 3D printing process. Minor malfunctions, incorrect installation of the device or wrong 3D printing settings can lead to a fire hazard. Tronxy sells most of its 3D printers in the form of self-assembly kits and although in principle it is not complicated (the devices come in the form of several assembled structural modules that must be combined together), the user takes de facto responsibility for the correct assembly and commissioning of the device.

Unfortunately, the Calvin Yu case is not the first time someone has died while using a low-cost amateur 3D printer. In 2016, Tom Taylor, a 17-year-old student from Lincoln, Mid-East England, suffocated in a fire caused by the ignition and explosion of a hair spray that he used to coat the work table of his low-cost 3D printer. A fire broke out in the workshop of his parents, who ran MagicNevin, an internet retailer for magician accessories. In addition to the vapors of the hair spray, the main culprit of the whole misfortune was the so-called flash paper, which allows to obtain an instant flash and a short-term flame, which is characterized by high flammability. 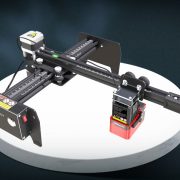 Creality introduces the CR-Laser Falcon laser engraver into its offer