Last week we took part in the next edition of Additive Manufacturing Europe 2016, one of the biggest trades of additive manufacturing trades in Europe. Although it is still miles away from (recently declining) Euromold or (growing) formnext and TCT but a presence of the biggest European manufacturers of 3D printers and filaments, makes them an important position in agenda. The event lasted 3 days and took place in the exhibition hall RAI in the heart of Amsterdam, in Holland. We presented our recap from the first day. Now it’s time to sum it up…

In contrary to another trades and events, this time I won’t describe all of the companies and I would like to focus more on the event itself. You will find more detailed descriptions in the next articles (last week we wrote about WASP).

When I started to make a recap from the trade, I realised, that it was incomparably smaller and more decent than Polish 3D Printing Days in Kielce, which became this year  a huge trade. After one week, I have still the same feeling. To be honest, I think that even a budding trade 3D Solutions in Poznań was better. Connecting presentations of 3D printers and industrial machines – like it was done in Kielce and Poznań – seems to be obvious and it broadens naturally a circle of recipients. Concentrating only on 3D printing causes that the whole looks rather… poorly.

The infrastructure of the RAI trade center looks very professional,  but it doesn’t outstrip Targi Kielce or MTP, where the Polish trades are organised. Its biggest advantage are parking lots for cars, where you can park your car with no fear that you will drive into a group of mad cyclists – the roads of Amsterdam belong to them. Generally speaking, driving in the capital of Holland is a nightmare, because the cyclists (in every age, of each race, sex or sexual orientation) lurk everywhere and treat cars like lemmings a precipice. If I go to Amsterdam next time, I will do by tank. 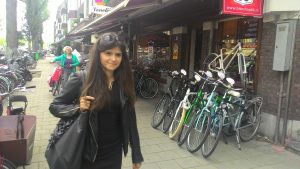 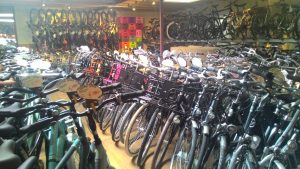 So yes, the closed parking lot was something what helped us not to kill mothers with children on bikes. Did I mention, that on the same bike lane you can meet also… nuts on scooters?

At Additive Manufacturing Europe you could have visited about 50 stands, which were dominated by Dutch companies. A star of the trade should have been Ultimaker – the biggest manufacturer of low-budget 3D printers in Europe., but… Zortrax stole the show thanks to its professional stand, a premiere of Zortrax M300 and its SuperHero – the best 3D print ever of FDM history (a subjective opinion of the author) and hostesses wearing black, tight-fitting spandex costumes. 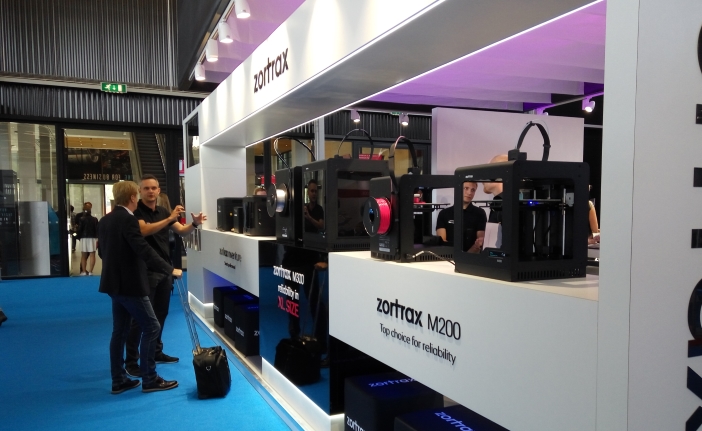 It doesn’t mean that Ultimaker didn’t do its job right. In “content-related” aspect it was the best and it proved that its position in TOP 5 biggest manufacturers of 3D printers in the world is not a coincidence.Audi RS5 with 3D printed elements of the engine, a model of Airbus hung in aerodynamic chamber, 3D print from silicone or amazing IT system to create farms of 3D printers (for about several dozen of machines) – Ultimaker is on the top of innovation and it connects perfectly a mirage of industry and low-budget 3D printing. 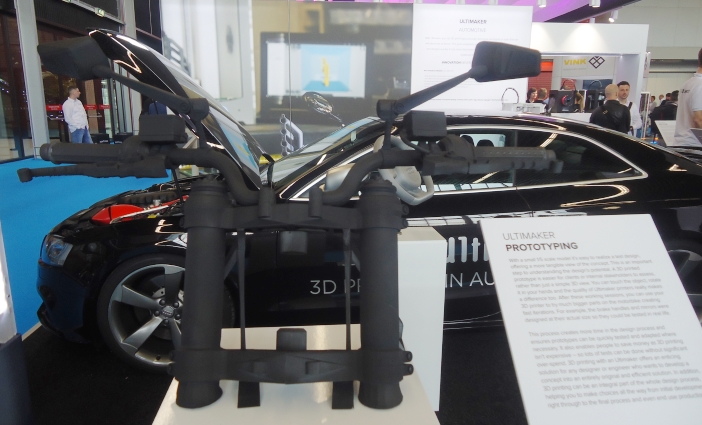 However, listening about innovative implementation of 3D printers in the industry is something different than looking at slender blondes (and one brunette) waving seductively with Zortrax’s flyers. No offence Ultimaker – boobs and death always win in media (Zortrax didn’t kill anybody, but there were boobs). 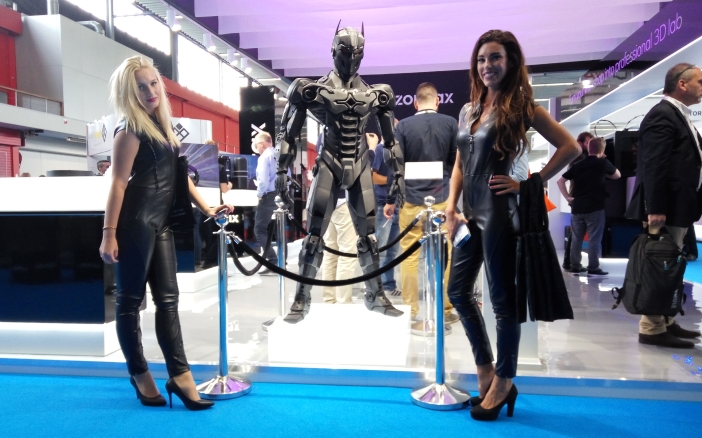 A great deal was also a machine printing from metal on the stand of TRUMPF. Unfortunately, Germans can’t prepare stands like Polish people and an interest with their 3D printer for metal was rather average. To be honest, if it hadn’t stood in the same line with Ultimaker a it wouldn’t have been noticed. 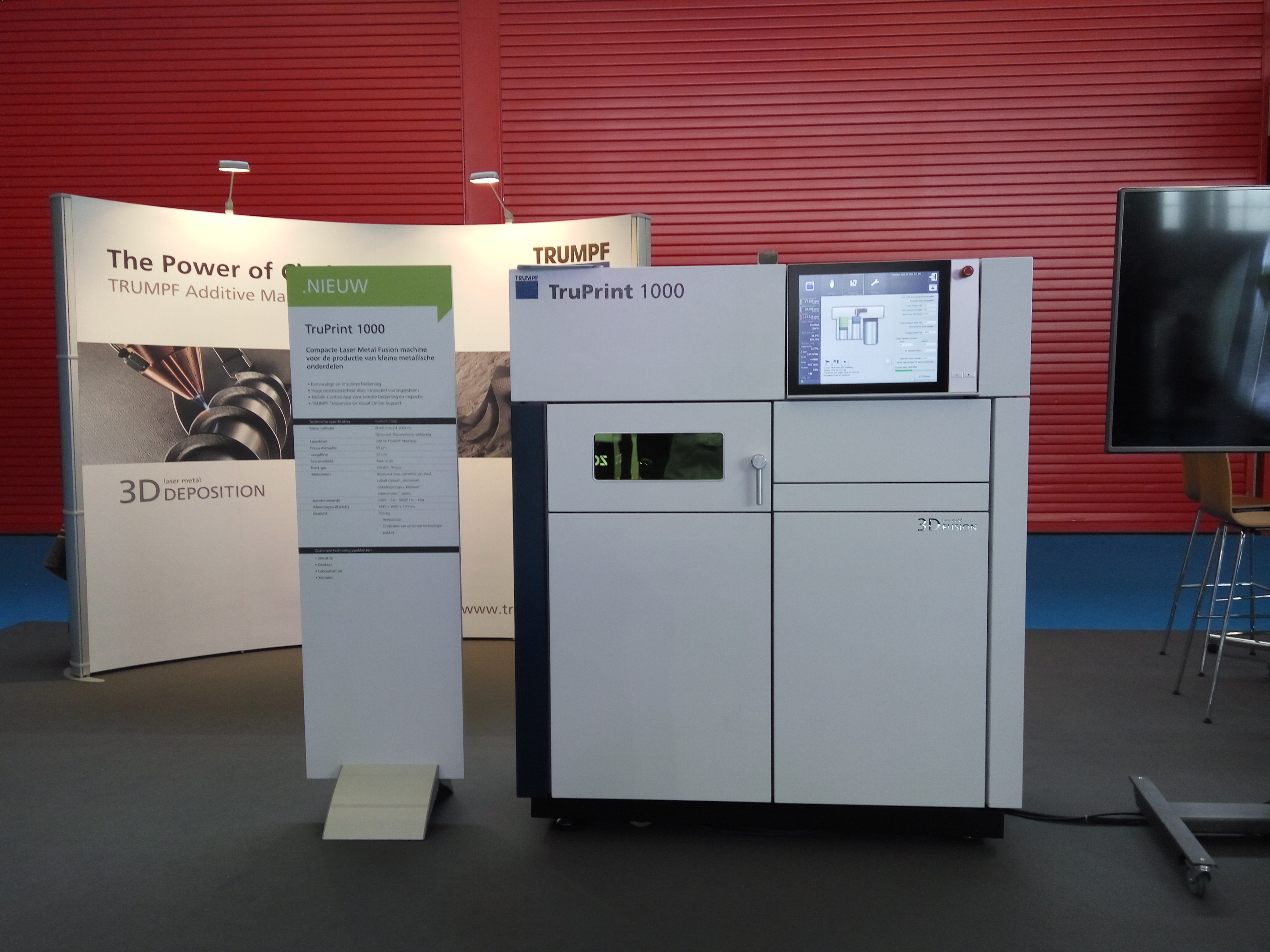 I had a feeling that the representatives of professional companies didn’t know how to exhibit their machines. EnvisionTec took two big machines and another smaller ones and 3D printed models, but it didn’t meet with interest of visitors. Prodways presented a few showcases and its visitors got lost in the desolation of Smaug on the stand.

As far as professional machines are considered, the most interesting features were presented by a Dutch distributor of  MCor, which took two machines and showed us the inside of ARKe!

If you think, that the future of FDM technology bases on printing of larde-sized vases, lamps, chairs or tables – Additive Manufacturing Europe would have been your Mekka. WASP, BigRep, Leapfrog, Builder, Delta Tower – if it has been my first time with 3D printers, I would have thought that 3D printing of furniture is something as natural, as printing of Yoda 3 years ago… In principle, everything looks spectacular and it makes an amazing impression, but there is still the same problem – what else can you print with them? The above mentioned chairs, tables and vases are O.K., but when you compare them with solutions offered by Ultimaker, you know, that you can only but a sticker with a word “surprise” on them.

It is the end of attractions of the Dutch trade… The rest presented some interesting things (as I mentioned, we will describe them successively in the next articles), but they didn’t change my point of view about the 3D printing industry. It was solid, but without fireworks. I liked stands of another Polish companies – 3D Lab, 3D Phoenix and Fiberlogy. Each of them came to Amsterdam with different type of products and they looked great.

3D Lab is a services bureau (it is obvious why it didn’t present machines from 3D Systems). Their offer and stand were as always on very high level. 3D Phoenix showed itself at its best – besides co-workers of the company, you could have met representatives of  ZMorph, HBot and Sinterit, because their devices were presented on the stand. Taking into consideration the fact, that 3D Phoenix is”only” a distributor of 3D printers and its stand looked better that stands of several producers (best regards for Prodways!). I can say the same about Fiberlogy which showed Dutch people how does a really good filament look like.

Additive Manufacturing Europe is for sure very interesting event, however its main advantage is a presence of leading companies. If not for occurrence of Zortrax, Ultimaker, Leapfrog, WASP, colorFabb, EnvisionTec, Prodways, TRUMPF, Sculpteo or Formlabs it would have been a local and niche event. A lack of another complementary trades caused that the hall looked a little bit empty. At the beginning we considered to stay 2 days in Amsterdam, but after one half of the first day it was clear, that it was not worth staying. We made walked around the stands for 2-3 times, talked with everybody, swapped our business cards over and we could have go to our hotel (and we tried not to call any suicide on bike).

All things considered: there is only one thing in which Additive Manufacturing Europe outdoes the Polish 3D printing trades (either 3D Printing Days in Kielce, or new initiatives like 3D Solutions) – the presence of big, international exhibitors. If it were visited by f.e. Ultimaker, WASP, Sharebot, Polymaker, colorFabb or Formlabs, the Dutch trade would lose its advantage. O.K. no disrespect to Kielce, but Amsterdam is more exciting place to spend your time after trade (Ben je op De Wallen geweest? Dan nodige ik je daar uit…), nonetheless, from the buisiness point of view, during 3D Printing Days in Kielce you can see and achieve more…

Foundations for a great and professional trade in Poland are ready. Now, its organisers have to build its prestige and encourage another big, well-known companies to come to us. Next time we won’t need to drive 1000 km to publish a life relation  from premieres of new devices and we will manage to do it in Poland.

Please, take care of it…