3D Systems announced its first quarter 2022 financial results, the company saw a -9% year-on-year drop in revenues, generating $133 million – $13 million less from the $146.1 million in first-quarter revenue 2021. The company attributes this decline in the sale of certain assets – including the entire 3D printing services division last year, and says that after adjusting financial data for non-core assets, its revenues actually increased by + 10%.

3D Systems continues to report its financial data in two segments: Products and Services, but after selling the 3D Printing On Demand division, most of its revenue comes from the first sector. The company’s revenues from 3D printing services decreased by -38.1% from $52.5 million in the first quarter of 2021 to $32.5 million in the first quarter of 2022. At the same time, sales of 3D Systems products increased from $93.6 million to $100.6 million in the same period, which is to result from the greater adaptation of the company’s offer in “production environments”. Likewise, while revenues for the Industrial and Healthcare divisions decreased by -6.6% and -11.3%, they increased by + 15.7% and + 4.6% after the divestiture of the Services division.

According to the president of 3D Systems Dr. Jeffrey Graves, this growth demonstrates the effectiveness of the corporate strategy shift it went through last year. Since then, it has focused on its core offering for industry and healthcare, with growth ahead of the former due to “supply chain disruptions” and the impact of new product launch.

Despite repeating its financial forecasts for 2022 last month, 3D Systems has now decided to narrow it down slightly from $570-630 million to $580-625 million, with a gross margin of 40-43%. While the company made it clear that this outlook was based on assumed market stability, it ended the quarter with a cash balance of $745.6 million. 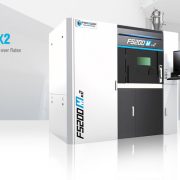