When considering the use of 3D printing technologies, you should focus on the entire manufacturing process. Usually 3D prints are not suitable for use immediately after the process and require further post-processing activities. A few weeks ago, Pawel in one of his articles pointed to the problem of the popularization of additive technologies in industry, which is post-processing – according to of the analyzed data, as much as 26% of the costs of producing details using the additive technique consume finishing works.

In order for the 3D print to achieve a surface smoothness comparable to mass-produced counterparts, it is necessary to undergo the finishing process. The amount and cost of work necessary to properly perform this action discourages many potential users from using 3D printers in the production of final products.

Manufacturers propose further solutions that can be a solution to problems related to surface finishing. Recent changes in the area of automated post-processing technologies, such as Zortrax SVS (Smart Vapor Smoothing), shed a whole new light on this problem.

READ ALSO: Zortrax Apoller – what is the smart vapor smoothing system for 3D printed models and how does it work?

In the following feasibility study, the performance of 3D printing in FDM / FFF technology with the use of automatic post-processing was analyzed on the example of the production of 500 pcs. of computer fan covers. The study assumes analyzing several business scenarios, taking into account such variables as the complexity of manufactured details or the length of the production cycle. The results were compared with the effects of traditional manufacturing techniques.

In the described case study, the computer fan cover was chosen as the basis for the test. At a time when the new fan is on the verge of mass production, printing 500 pieces is the ideal number required for refrigeration testing. In addition, the fan cover is relatively rarely damaged, it is ideal for printing it as a spare part.

In each of the production technologies, which were analyzed below, it was assumed that the material will be ABS, as it is the material from which computer fans are almost always produced.

For low-volume production of parts consisting of one element, the production technique of injection molding appears to be a more cost-effective production method (table with the distribution of costs below). The 3D printing method coupled with an automatic 3D post-processing system has, however, led to a shorter time to market the product and more universal production resources that can be used in subsequent projects.

Analyzing the table, it can be concluded that the main difference between 3D printing and injection molding in low-volume production is to paying more for halving the time to market the product. This claim is true only if two conditions are met:

The table below shows comparative values for a detail consisting of two parts of similar size and complexity. It was assumed that two molds are needed for injection molding of two separate parts.

In the case of slightly more complex elements, which consist of several elements, injection molding turned out to be less effective than 3D printing with an automatic post-processing system. What’s more, by analyzing the analyzed cases in terms of complexity and unit costs, an interesting trend was noticed (see the chart below).

Analyzing the chart above, it can be seen that the impact of increasing the product’s complexity on its unit price is negligible. A noticeable increase occurred only in the case of a four-element product – it results from the need to invest in a second 3D printer, necessary to maintain the 12-week production lead time.

In the case of injection molding technology, the increase in the complexity of the parts turned out to be synonymous with the increase in the unit price. This is due to the fact that elements with different geometries can be made on a 3D printer without any additional costs, while producing them using injection molding requires ordering a new mold for each new element.

The situation is completely different if the production of 500 pieces of the product is not incidental, but is repeated over a long period of time. In this case, 3D printing with an automatic post-processing system leads to a reduction in the unit price compared to injection molding. What’s more, the 3D printing method increases the volume of annual production – the estimated number of units that can be produced using two production methods is presented in the chart below.

The significant discrepancy in the number of items is due to the significantly longer lead times for injection molding. Analyzing the case study, it was submitted that the manufacturer had no previous knowledge about the production of the products that will be manufactured, and thus was not able to order all the necessary forms. To better illustrate the differences between manufacturing technologies, a comparison was made in the form of a table.

For the next five years of theoretical production, the predictions are as follows:

It is easy to notice that in the case of repeated low-series production, the unit price of the product decreases over time, while in the case of injection molding it remains unchanged. The last scenario to be analyzed was the five-year low-series production of four-element products in a series of 500 pieces per cycle (table below). Here, it was assumed that the machine park also has a second M200 Plus 3D printer to ensure a delivery time comparable to injection molding. It is worth paying attention to the striking discrepancy in the unit price.

This is a classic manufacturing method dedicated to mass production. Parts are created by injecting molten material into a mold – an empty block in which the material hardens to take its shape.

The biggest disadvantage of technology is the high cost of the form, for which you have to pay in advance. The advantage is that the form is reusable and the unit price decreases as the scale of production increases. Examples of the costs of making 500 pieces of these elements are listed in the following table.

The delivery time for injection molds in the designed offer depends on the manufacturer’s location and type of transport – diameters, the time for transporting the mold from China is estimated at 12-15 weeks.

The unit price would therefore be USD 9.58, noting that the first series of fans would only be available after about a hundred days. The investment of USD 4790 means that you become the owner of the mold and you can order the injection of subsequent fan covers for the previously agreed amount of USD 0.42 per item. However, the costs of logistics or storage of over 500 fan covers were not included.

To estimate the production efficiency of 500 pieces of fan guards using 3D printing technology together with an automated post-processing system, it was first determined which device would be more relevant to the presented case – the flagship 3D printers Zortrax M200 Plus or M300 Plus, with a larger working chamber.

In both cases, the fan covers are made of Z-ULTRAT material, a durable ABS-based filament suitable for this type of end products. Finally, the Zortrax Apoller SVS automatic post-processing device was used to obtain perfectly smooth, shiny surfaces. The comparison of costs and time is presented in the table below.

After making the models, the time-consuming post-processing stage began. Manual machining of the models included grinding and painting work. It took two full days to sand the 500 pieces. Spray painting lasted over 6 hours, and the elements had to dry for the next 6 hours. The total time required for manual processing was 54 hours. However, the costs of human labor are difficult to estimate and depend largely on the part of the world where the production plant is located

Automatic vapor smoothing is an alternative technique to obtain smooth and shiny surfaces for 3D prints. The Zortrax Apoller SVS device that was used in this study could contain 256 fan shrouds in the smoothing chamber. Two lots of fan guards were chemically treated in separate, 3-hour smoothing cycles. The total cost of the process did not exceed USD 2.50.

Approximately unit cost was PLN 15. A set of 500 fan covers was made in 6 weeks. Both the Zortrax M200 3D printer and Apoller SVS have remained in stock and can be used in future projects, which will also reduce production costs.

Based on the analysis, the following conclusions have been drawn:

3D printers working with automated post-processing systems do not require tool changes depending on the project implemented on them, which causes savings to increase in low-volume production. 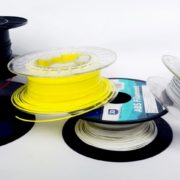 Everything you need to know about ABS filaments 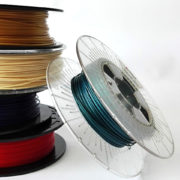 Everything you need to know about PLA filaments