Some time ago, during a discussion on the further development of our portal, we came to a conclusion that we could basically write the same thing over and over again… I mean articles on broadly understood “basics of 3D printing” – what is it, how it works, who uses it etc. We could, for example, publish articles on a monthly basis like “How does the 3D printer work?” or “What are supports for?”. Some regular readers would feel bored and discouraged, but I guarantee that a whole bunch of new 3D printer users would elevate these texts to the top three of TOP 10 articles of the month!

Either way – we haven’t decided yet. This does not mean, however, that this is a poor idea – on the contrary, there is no week that I would not be convinced that writing about basic and elementary issues will guarantee high website visitability and a whole lot of clicks. Take for example this – is 3D printing a new technology? It would seem that this topic has been rolled out for so long and covered in countless articles that we might as well explain how traffic lights work and what the different colors of lights mean? And yet we can still hear it or see it in TV or on some videos…

Interestingly, the TV editor did not say it – this was repeated by representatives of the 3D printer manufacturer. I do not intend to criticize anyone personally, which is why I do not give any names, locations or even more links to the footage. This is not about any particular company or person… It’s about the principle…

3D printing is not a new technology. I wrote about it many times, nevertheless, I will write it once again:

Thus, the year of creation of 3D printing technology is 1984, and the official birth of the 3D printing industry is 1986. So they are now 36 and 34 years old respectively.

In case anyone has any doubts whether 1984 was a long time ago or recently and 36 years is a lot or a little, here are some interesting things that happened at the same time as the birth of 3D printing:

So yes… 3D printing was created “some” time ago.

Someone may ask – “and why it is so important to you…?”, or – “do you really have nothing else to write about…? ” Well, one of the biggest problems faced by the 3D printing industry is still negligible awareness and knowledge of people about what additive technologies really are and what they can be used for? Around the 3D printing has accumulated a whole bunch of myths – and sometimes even pyramidal nonsense and imaginations, and it is difficult to later present the reality to the potential customer, without arousing disappointment and discouragement to 3D printers. Some traders who offer devices and consumables for 3D printing exaggerate selected technical obviousness by promising customers uncomplicated things. “3D printing as a new technology” is part of this story.

Let’s face it, the FDM / FFF 3D printer – especially in the desktop edition, is a fairly primitive device. All it does is move the print head in the XYZ axes and extrude a thermoplastic material through it. The whole “mystery and uniqueness” of this machine is software capable of processing a 3D object saved as a mesh of triangles (.STL) into a sequence of commands moving stepper motors and moving the head, table and extruder (.GCODE). The 3D printer of the FDM / FFF type (in the desktop version) is technologically as amazing as a CNC milling machine or any other industrial tool.

In case someone still does not know – FDM technology was developed in 1989 by Scott and Lisa Crump, and later its amateur version in the form of the RepRap project was developed in 2005-2007 by Adrian Bowyer.

Once again I will write what I have been writing and repeating during my trainings, lectures and presentations for past seven years:

3D printer is just a tool. What important is the application – the thing that is created with it.

Additive technologies are nothing unusual. They are just another manufacturing technique with certain advantages but also disadvantages. There are areas where 3D printing works perfectly, there are areas where it is completely unsuitable for anything – it all depends on what and how we want to create a thing? How much time and money do we have to do it, should the item be pretty or done in an exact way? The most important is whether it meets our expectations and works? This is the only thing that counts and it makes no sense to dress it with the ornaments of a thirty-year-old “novelty”.

3D printing is not a new technology – it is a niche technology and not very popular one. The fact that someone found out about its existence 2-3 years ago only means that it is new – but only for him… 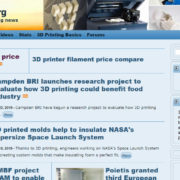 It’s time for someone to finally say that loud: 3ders.org is dead