One of the areas in which 3D printing is used very often is the automotive industry. Additive manufacturing enables rapid prototyping, allowing designs to be freely tested and improved in a short time. 3D printing of a component takes from several to several hours, making it an excellent alternative to traditional manufacturing methods.

The company Autoclima Polska Sp. z o.o. operates in the transport air-conditioning sector, for many types of commercial and industrial vehicles as well as specially modified ones, such as ambulances, armored vehicles, delivery vans, office vehicles, recreational vehicles and many others. Many years of experience allows us to quickly respond to dynamically changing customer needs. The company is currently participating in an innovative project related to the cooling system for the production of a car prototype. As in any innovation process, trial samples are needed. As part of the project, the brand created an adapter prototype project. It used 3D printing, which is perfect for such applications.

The adapter design made by Autoclima engineers was produced by Omni3D 3D printing technologists on 3D printers. The component was then subjected to endurance and functional tests over a wide temperature range from -40 ° C to 60 ° C, simulating a normal operating environment, while nominally the part is operated in the temperature range of -30 ° C to 50 ° C.

Taking into account the operating conditions, assembly method and endurance tests, Omni3D technologists suggested the use of ABS-42 filament. The large-size model was made on the Factory 2.0 NET large-format 3D printer. The device has a heated working chamber with a volume of up to 142l and a precise filament extrusion system. The patented, proprietary Omni3D OmniCoolingSystem allows the production of elements from shrinkage materials without the risk of deformation and deviations in dimensions.

Omni3D industrial 3D printers allow you to quickly manufacture non-standard, prototype parts of small or medium volume. The systems used in them allow you to quickly create components of any geometry, allowing for a quick iteration of modified designs. In addition, additive manufacturing allows you to reduce the amount of waste and use one device to produce functional models, which is in line with the idea of ​​sustainable development, environmentally friendly.

The client confirmed the implementation of subsequent models after handing over the first three prototypes. Over the next two years, Omni3D will 3D print another 175 adapters, allowing for low-series production of unique special-purpose cars created as part of Polish-Italian cooperation.

Prototyping with the use of 3D printing gives you the freedom to design, quickly test and constantly improve products with one device. The project is only a few to several hours away from the finished model, therefore additive manufacturing is an excellent alternative to conventional manufacturing methods. By manipulating the machine and process parameters, e.g. nozzle diameter, layer thickness, filling, we can control the production time and the amount of material used. Therefore, 3D printing is perfect for both the production of prototypes and low-volume production of functional elements. 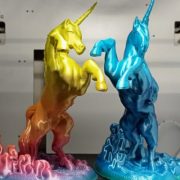