The next season of Formula 1 will start in less than a month, on March 15, 2020. Important information for Polish fans is that PKN Orlen has become the titular sponsor of the Alfa Romeo Racing team, and Robert Kubica will be his reserve driver (racing drivers are Italian Antonio Giovinazzi and experienced Finn Kimi Raikkonen). At the end of the week, a new Alfa Romeo Racing Orlen car – C39 was presented in Barcelona for the first time, and each of the team’s drivers tested it. In addition to Polish accents, this information has an additional impact in the context of 3D printing – the new car has as many as 143 parts printed on 3D printers!

The elements were printed from metal on three MetalFAB1 3D printers from Additive Industries, which is the official technology partner of Alfa Romeo Racing Orlen. Three metal alloys were used – 58 parts from titanium and 85 from aluminum (66 items from AlSi10Mg and 19 items from other high-performance aluminum). Additive production of these parts reduced the car’s weight by about 2%, which, although it appears to be a small number, is very important from the point of view of the performance of a Formula 1 car. chassis fragments, cooling circuit piping, fairings, electronics housings and selected body fragments.

The company responsible for the production of parts is Sauber Engineering, which in the area of ​​3D printing technologies has been cooperating with Additive Industries for two years, using three metal 3D printing systems – MetalFAB1. Of course, these are not the only incremental machines of the company – Sauber also has a large-format 3D printer for resin ProX 800 SLA from 3D Systems and a number of other machines of the American manufacturer working in SLS and SLA technology. 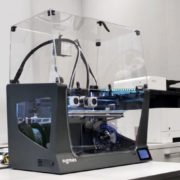