Materialise – a leading company that provides 3D printing services and produces specialized software for the needs of additive technologies, published financial results for the fourth quarter of 2019 and the entire past year. In contrast to the 3D Systems reports published several days ago, they look decent, although it is difficult to find any gigantic increases here.

Materialise is the first company in the world to provide 3D printing services. Established in Belgium in 1990, it is one of the progenitors of the 3D printing industry, along with 3D Systems, Stratass and EOS. In 1992, Materialise created the first program for processing scans made using computed tomography into three-dimensional anatomical models, opening the company two further development paths – the production of 3D printing software and specialization in medical applications. Today, each of these areas is an independent pillar on which the company’s power is based.

Last year the company recorded an increase in revenues in the segment of software sales as well as medical services and products, while in the segment of 3D printing services for industry it recorded a small, almost 1% decrease. This was the result of a rather weak fourth quarter, where revenues from this title dropped by as much as 11%. For the entire year, Materialise generated a profit of € 1.72 million – € 1.3 million less than last year (in 2018, the company earned € 3 million). However, you should not look for any problems here, as total revenues increased by a total of 6.47% (from € 184 million in 2018 to € 196 million in 2019) and it should be remembered that during the year there was to acquire the Brazilian medical company Engimplan, which had an impact on the final financial result.

These are the annual results broken down into each segment:

The company owed such a large increase in revenues from solutions in the field of medical services and devices by 16.9 percent to the acquisition of Brazilian Engimplan. On September 2019 Materialise has acquired 75% of the company’s shares specializing in the production of implants and orthopedic and facial-maxillary instruments.

This is how the company results are commented by Peter Leys – Materialise Executive Chairman:

The additive manufacturing market continues to evolve, with new applications steadily finding their way to market. We intend to continue positioning Materialise to benefit from these promising growth opportunities in the coming years. In 2020, we will dedicate significant attention to supporting the development of a wide variety of meaningful end part applications with our generic software tools, and, more specifically, to growing a select number of key applications Materialise is more directly involved in. 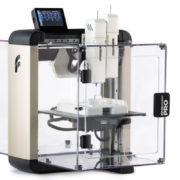