Materialise – the biggest company offering 3D printing services in the world decided to carry out a series of specialistic conferences about technology of 3D printing from metal –  MATERIALISE METAL TOUR. The conferences were organised in 10 cities and 9 countries in Europe. Until now, specialists from Materialise visited: Sheffield, Milan and Ostrava and last Monday (16.05.) they came to Łódź. CD3D was a co-organiser of the event.

The Polish edition of the MATERIALISE METAL TOUR was held in Technopark Łódź, where also the seat of CD3D is placed. The conference was carried out by three specialists – Marcin Matacz, Account Manager of the Polish branch of   Materialise and  PhD Simona Masurtschak – Senior Project Manager and Sven Hermans Business Development from the headquarters of the company. It was attended by representatives of leading companies from: automotive and aircraft industry in Poland, which use additive technologies on their daily basis. Lectures of specialists from Materialise had an aim of broadening a knowledge about the most complicated of all of the technologies of 3D printing – DMLS (direct metal laser sintering).

As we promised, we prepared a special surprise. The topic of the conference was 3D printing from metal. We wanted to stress it with good and hard atmosphere of metal music of the band Solution coming from Łódź which welcomed the guests with cover of “Delusions of Saviour” of SLAYER. The whole Technopark knew, that it was a serious matter…

The conference was begun by Marcin Matacz who told a short story about Materialise and its most important achievements. Simona Masurtschak presented particular types of 3D printing from metal and materials, which are used in it. After that, Sven Hermans – a manager with over 8 years of experience in structures of Materialise described the most important rules of designing for 3D printing in metal. The participants heard about requirements concerning the minimal thickness of wall of 3D models or how to create supports.

Each specialist from Materialise was assigned to one team and they tried to create a project which could be 3D printed in DMLS technology. That is why the knowledge gained during the conference was necessary. Than, their projects were presented and Simona and Sven commented on them. 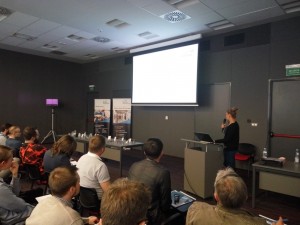 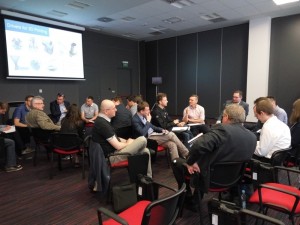 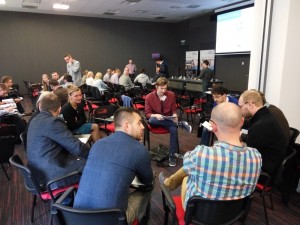 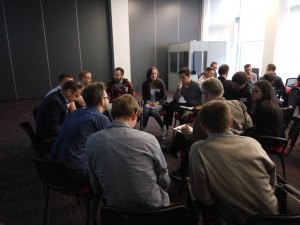 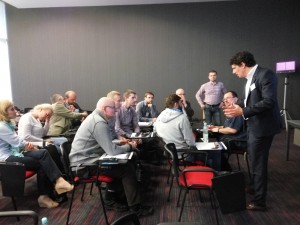