GE Healthcare at lightning speed has become one of the most important companies in the medical 3D printing industry. Further collaborations with companies closely related to additive technologies (such as Formlabs or Advanced Solutions) have strengthened the company’s position. Now GE Healthcare is opening a new, yet another, center of additive technologies, where components for the production of equipment for the biotechnology industry will be serially created.

The latest additive technology center is located in Sweden, in Umeå. This is not the first company facility of this type in this country – nearly two years ago, a similar center has already been erected in Uppsala. The centers were created for the mutual cooperation of their colleagues who will be able to complete the full additive production process – from design to final element.

While the unit in Uppsala works primarily in the field of design and validation of projects, the newly created facility was created for mass production. GE specialists hope that the availability of such solutions will increase awareness of modern manufacturing technologies among representatives of the pharmaceutical and biotechnology industries.

The center is equipped with industrial 3D printers working in powder technology. In addition to the device that allows 3D printing from polyamide powders, the building also has a dedicated infrastructure – including powder mixing or finishing treatment station. As an example of elements that will be produced in the factory are given, among others parts of modern chromatographs

Olivier Loeillot, a representative of the company, says that additive technologies enable the production of small elements while maintaining high quality, which is a priority in the case of industries closely related to laboratory tests.

According to GE Healthcare, the inclusion of additive technology in production design and production involves not only greater freedom, but also shorter lead times or the creation of a more flexible supply chain. What’s more, 3D printing technology is playing an increasingly important role in optimizing logistics processes such as supply delivery. 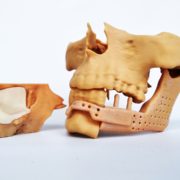