As we have written about it many times on the portal, the COVID-19 pandemic and its economic effects caused by the economic lock-down had catastrophic consequences for the whole mass of companies that make up numerous branches of the economy. Also in the 3D printing industry, leading companies such as 3D Systems, Materialise, GE Additive and Stratasys were seriously injured in the form of significant drops in sales and low revenues. This does not mean, however, that the pandemic lock-down was equally severe for everyone – a number of companies producing cheap 3D printers and consumables for them kept sales records, and some of them used this time to obtain additional funding for their activities from the funds investment and private investors.

During the pandemic, the 3D printing industry stood at the forefront of many activities. When traditional supply chains were interrupted and the need to produce scarce products or develop completely new solutions arose, 3D printers working in various additive technologies rose to the occasion. The so-called distributed manufacturing showed its real potential to the world for the first time, when hundreds of thousands of people around the world produced personal protective equipment – helmets, masks, filter adapters or swab sticks.

At the same time, in addition to applications related to the pandemic itself, additive manufacturing has started to play an important role in rebuilding disrupted supply chains of components and production tools. The decentralization of production based on 3D printers allowed for the production of any components anywhere in the world.

All this was noticed by investors who once again saw great potential in 3D printers. This time, however, not in the area of ​​individual use (the infamous concept of “3D printers in every home”), but where additive technologies have always been used most – in the manufacturing industry.

The following companies have recently announced that they will obtain multi-million dollar funding:

At the same time, there were also several significant acquisitions of companies by larger entities. These include:

There were also similar events on the Polish market – at the very beginning of the pandemic, the EEC Magenta Fund invested PLN 10 million in Krakow’s Sinterit, and in April, the Warsaw Equity Group and a group of smaller investors invested PLN 5 million in ZMorph in Wroclaw.

The above list confirms that 3D printing is back in favor of investors who, after the speculative bubble in 2012-2015 burst, see the potential of additive technologies again, this time in a place where it actually has advantages over other production methods. 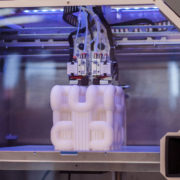