On Thursday (09.06.2016) I took part in the first edition of trades 3D Solutions in Poznań. It was joined with 3 another events Innovations-Technologies-Machines Poland, trades of Industrial Cooperation Subcontracting and Founding Forum Focast. Thanks to this combination, stands of exhibitors with 3D printers and solutions for 3D printing (f.e. 3D scanning) were visited by representatives of a big industry. Additive technologies were for them an interesting addition or in some cases an alternative to traditional methods of production. From the other hand – it was the next Polish event focused on 3D printing, which become on popularity. Is it worth to go to Poznań next year and what was new there?

To be honest, at the beginning I was sceptical about 3D Solutions. A lot of Polish companies from the 3D printing industry have been bombarded with invitations for several events, trades and conferences recently. I was worried about number of potential exhibitors and visitors. After I came to Poznań, I was positively surprised, but I would like to say, that when you compare it with 3D Printing Days in Kielce, you’ve got a feeling, that something is missing, but still the organisers of the 1st edition of trades didn’t have reasons to be ashamed of the event.

During the trades you could have visited several dozen of stands of companies specialised with 3D printing (manufacturing and distribution of 3D printers and filaments or services) and a few companies presenting 3D scanners and services connected with them and reverse engineering. Most of them were well-known Polish companies but you could have met debutants. 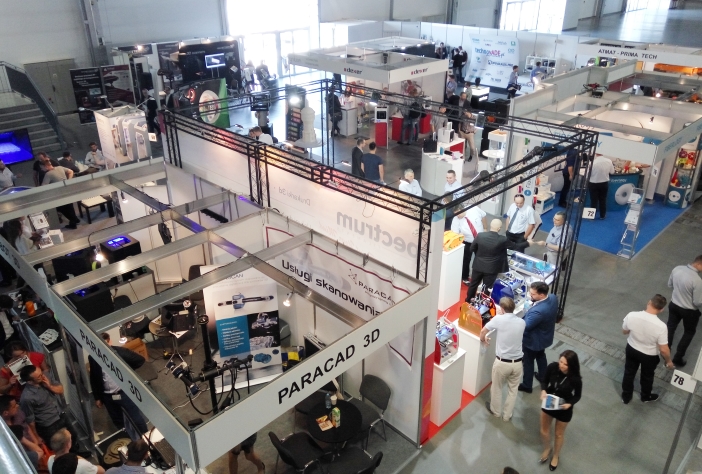 An exciting point of the event was a presentation of final version of Factory 2.0 by Omni3D, which is destined for “pro-consumer” and professional market. The machine was presented for the first time during 3D Show in Warsaw in 2015. It was developed and equipped with several additions, which improve a quality of work and prints. The most important changes are a functionality of cooling with water, developed system of automatic calibration of the working bed, what’s crucial in case of such a big working area (50 x 50 x 50 cm). 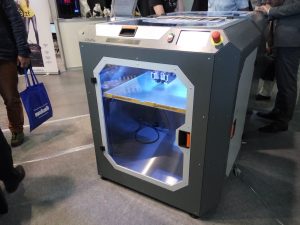 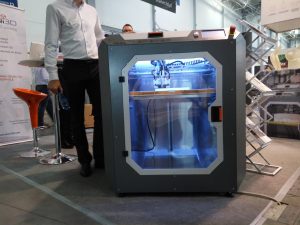 The working chamber is enclosed and the internal temperature during work is not lower than 60°C. According to representatives of Omni3D, Factory 2.0 was developed to use above all ABS, however it’s possible to print from another popular thermoplastics. It is equipped with 2 printing nozzles, which are easy to change (f.e. to change a diameter of nozzle or clean it). What’s interesting, you disassemble a whole block with extruder, not only the nozzle.

The company presented a great number of trial prints, which impressed with their size. From my perspective is hard to say something about working with the machine and about its reliability. I can’t also judge, if it’s user-friendly but it’s obvious that it’s miles away from previous, low-budget 3D printers from RapCraft series. Omni3D spent a lot of time on developing of the device which, in my opinion, seems to be professional.

The second 3D printer, which caught my attention was MarkOne from Markforged, distributed by 3D Services. I know, that it was presented during 3D Printing Days in Kielce, but this time I had an opportunity to talk to representatives of the company. The 3D printer uses nylon reinforced with carbon and glass fibres, or kevlar and it’s dedicated for professionals. It’s the only one device of this type available on the market.

MarkOne is equipped with 2 printing heads – one of them spreads nylon of a standard diameter – 1,75 mm, the second melts one of additional materials into it. The special materials (kevlar, carbon or glass fibres) have a lot smaller diameter and are sold in small spools, which look like fishing lines. They are quite expensive – a roll of kevlar costs about 150 € and of carbon fibres 220 €.

Spectrum Group presented a big stand, where you could have found their filaments and 3D printers: Mass Portal, 3DGence, Micro from M3D and a lot of commercial figurines which are offered to customers. As we know for the interview with its co-owner – Tomasz Augustyniak, Spectrum Group concentrates on selling of chosen models of 3D printers – above all Mass Portal and  3DGence, which it distributes with  ABC Data.

Besides filaments and 3D printers, you could have admire models created for customers of the company, like: architectonic mock-ups and industrial details. As I heard from Tomek Augustyniak and Michał Żołądek – they want to focus on this area. They realise big orders, which require at least several dozen of 3D printers at the same time.

The second company representing manufacturers of filaments at 3D Solutions was Fiberlab S.A. – a creator of Fiberology, which debuted in March 2015 during 3D Printing Days in Kielce with its innovative material – PLA HD. When you put it into oven and heat it to 80°C, the filament’s resistance is typical of ABS. Another material, which was presented during the trades was a brand-new PLA Mineral, which is high-resistant and flexible, what is not common in case of PLA. Because of its colour and structure, it’s perfect to print mock-ups and another architectonic elements.

It was the first time, when Art-Flex took part in such a big even and had an opportunity to meet a wide range of  and met people companies from the industry. On the daily basis they produce specialistic wares made from plastics and it has been testing its own line of filaments for low-budget 3D printers. What distinguishes them on the market, is the way, how they are packed. Transparent boxes (spools) protect them against dust and moisture. After carrying out the test, Art-Flex is going to sell them.

Zortrax turned up in Poznań with its basic but aesthetic stand.  It showcased two 3D printers – M200 and Inventure (which wasn’t working). What’s more, a few fantastic, but hackneyed models, with Batman’s mask in the lead. Unfortunately, it’s still not known when it will begin to ship Inventure (I heard only that “the company is doing its best, to sent them as quick as possible”). Moreover, it confirmed a planned premiere of the new model of the machine in Amsterdam on June 28th. 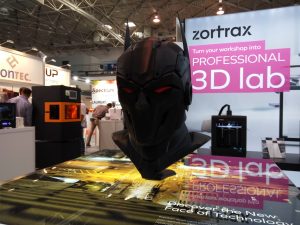 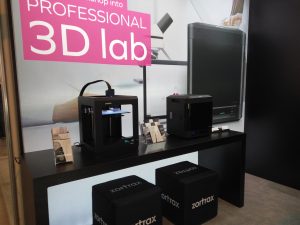 In front of Zortrax, you could have visited a quite sizeable stand of Sygnis and Solveere. The companies have cooperated from the beginning of this year, mainly in area of selling of professional 3D printers from German EnvisionTEC. You could have admired three machines from Flashforge in the action and two UP’s Mini – ONE and TWO.

Dexer presented three models of its 3D printers printing in the FDM technology. The company was established 3 years ago, but it is a little bit “out of reach” and it takes part in events and trades extremely rarely. Dexer decides only on B2B sales and it uses contacts of its mother company. Dexer Mini costs under 1000 €, its working area is 16x16x16 cm and it’s dedicated mainly for schools. Dexer Maxi is destined for companies (it has a bigger working area 22x22x22 cm) and costs about 1800 €. Dexer Multi is designed according to the customer needs. It can be equipped with 2 nozzles. It costs about 3750 €.

Atmat presented a wide range of 3D printers, which don’t convince me at all. I commented on them during the last edition of the 3D Printing Days and I don’t want to repeat it. The machine, which is impressive, is DrinkBot – an automatic barman, which prepares drinks from 7 types of alcohol and juices. In Poznań, we could admire its (almost) final version. It is going to cost about 2200 € and it waiting for the last certificates, which enable it to work with specialistic filaments like vodka, whisky, gin or Martini. Anna  tested it in person (I had to drive a car…).

All things considered 3D Solutions – were incomparably modester than 3D Printing Days or (infamous) 3D Show, but like for the first time, it was quite nice. When its organisers make an effort to commercialise it next year, it can be an inspiring event, perfectly passed to trades agenda. 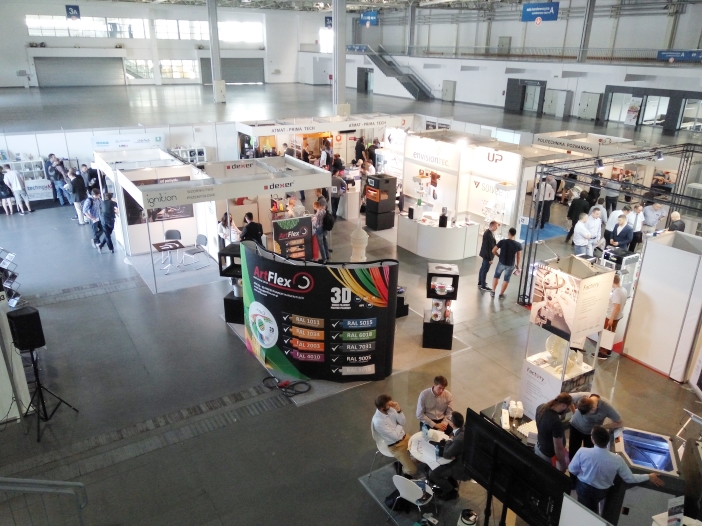 On the other hand it was hard to find novelties. I can honestly say, that I have seen everything instead of Factory 2.0 before… Naturally its not a fault of the organisers, but this situation reflects perfectly the condition of the Polish 3D printing industry. Of course, you can’t expect novelties in every 3 or 4 months. For me, the most puzzling was the fact, that every time, when I go on trades, I meet the same people… Are they organised for the same group? It’s not a good prognosis, but maybe it’s just an illusion.