Mitsubishi Electric Corporation – one of the largest Japanese electronics manufacturers, announced the launch of its own metal 3D printer – AZ600. The device uses the method of laser melting metal alloys in the form of welding wire called DED (Directed Energy Deposition). The machine will be available in two configuration versions, differing in terms of the power of material melting oscillators.

AZ6000 is equipped with a 5-axis spatial control system. Thanks to the technique of melting and surfacing metal, machine users will be able to both create applications from scratch, as well as print new elements on the surface of existing components. This will find use in filling cavities in parts used in sectors such as aviation, automotive and the marine industry.

The Mitsubishi machine comes in two variants: the AZ600-F20 is equipped with a 2 kW oscillator, and the AZ600-F40 is equipped with a 4 kW oscillator. The 3D printer has been designed with low energy consumption and short processing time. The use of welding wire in the work, instead of powdered metal alloys, will make the production costs much lower. It should be emphasized, however, that the surface quality of the printed parts will be much lower than those produced using the powder method and the prints will require additional post-processing. The company’s sales target is to deliver 100 pieces of each model per year.

Regardless of the launch of a 3D printer, Mitsubishi has also introduced a contract 3D printing service based on its proprietary system. The company will also offer consultancy in the field of designing parts for 3D printing. When it comes to post-processing, Mitsubishi Electric entered into a partnership last year with the British company specializing in post-processing – Additive Manufacturing Technologies (AMT). 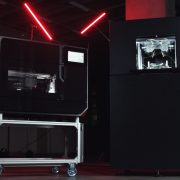 EOS supports Ukraine and ceases cooperation with clients from Russia