Voxel8 is a 3D printer which hit the CES in Las Vegas in 2015. An unknown company established by Harvard professor Jennifer A. Lewis presented a machine which enables to create ready to use electronic devices consisting of circuits and casings. The company offers a very intriguing opportunity to order a free sample made using its Developer’s Kit 3D printer.

The promotion of the device reverberated in the whole 3D printing industry. No wonder, that it interested a lot of corporations, some of them are not directly connected with this „world”. One of its first recipients was Google ATAP.

The Voxel8 is equipped with 2 nozzles. One of them is destined for traditional 3D printing from PLA and the second one is used to made circuits from special ink which consists of nanoparticles of silver. Voxel8’s Silver Ink 3D printing material, the first to be developed by the fledgling company, has a bulk electrical resistivity below 5.0×10-7 Ω-m. It is 20,000 times more conductive than conductive filled-thermoplastic filaments and over 5,000 times more conductive than carbon-based inks, making it suitable for 3D printed electronics with large operating currents. The 3D printable ink is formulated specially for pneumatic deposition through a 250 micron nozzle. 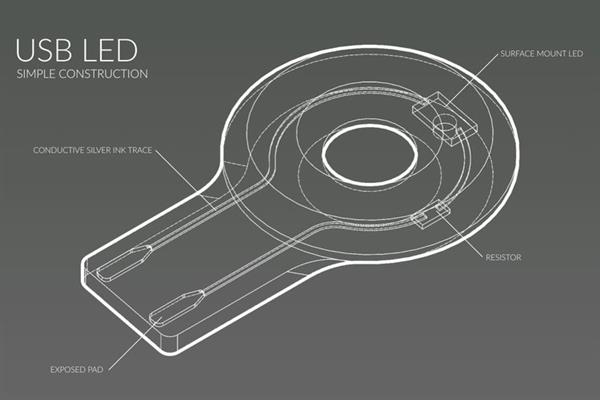 The company had a thrilling idea how to promote its solutions. Everyone can order a free sample made with the 3D printer. The part in question is a 3D printed LED light, consisting of a single-loop circuit and an embedded surface mount LED and resistor connected in series. The component can be fabricated in a matter of minutes, with the embedded electronics inserted as the housing is being printed.

It’s a nice gadget, but remember that only the sample is for free and you have to pay for sending it, but still it is a great opportunity to explore how the Voxel8 works.