During Additive Manufacturing Europe 2016 a Dutch company Leapfrog presented a prototype of its 3D printer – Bolt. I had also an opportunity to work with a Spanish 3D printer BCN3D Sigma in June. I decided to test this device. When I saw pictures and  a specification of the Bolt, I had a feeling, that it could be an alternative version of the Sigma. I would like to compare them and present you results.

A few years ago the 3D printing industry was just booming, now we can rather talk about its stagnation. I mean machines, which are produced in great numbers, but they are not surprising. 2 or 3 years ago you could have admired a plenty of novelties. When I see a new 3D printer I really rarely get the WOW effect…  I don’t want to criticize anybody, because it is hard to construct a new low-budget FDM 3D printer and it is possible, that you can’t “squeeze” more from that form. Some manufacturers try to oppose this stereotype and create something special like for example: RoVa4D, which shows, how full colour blending 3D printing works.

No wonder, that some manufacturers “take an advantage” from ideas of their rivals. As I mentioned at the beginning, I see a lot of similarities between the both models, but it is only my subjective opinion. Another matter is the fact, that Sander Adam –  the CEO of Leapfrog calls Bolt a revolutionary device…

There aren’t a lot of similarities between them, but some of them are visible with the naked eye. 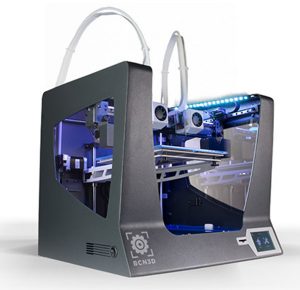 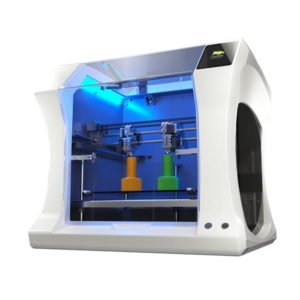 First of all the construction of the Leapfrog it’s a modified frame of the Sigma. It’s just an inversion. It has a similar design and a touch screen placed at the same place.

The second aspect are two printing nozzles. It is obvious, that the company which implemented two independent nozzles for the first time was BCN3D and this move was a serious revolution! Leapfrog was (?) the second, but its mechanism gives more possibilities, which I will describe later. 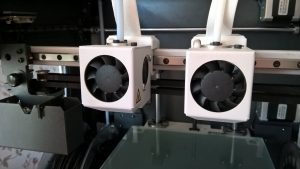 The Bolt is equipped with an enclosed working chamber with HEPA filter, which protects against harmful ABS vapours. The device has also meaningfully bigger working area of 320 x 330 x 205 mm, in case of the Sigma it is only 210 x 297 x 210 mm. Moreover the Bolt can work in two modes: replicator mode – using bth nozzles at the same time effectively gives you two printers, what means, that printing the same object multiple times can be done twice as fast; mirror mode – which cuts an orb in half and print both halves… This function requires a bigger working platform, to enable the movement of the both nozzles in the X axis.

An important difference is also type of extruders. The Bolt uses direct drive extruders. The Sigma is equipped with Bowden, what enables working with flexible filaments. Additionally, the nozzle of the Bolt can be heated to 360°C, and the Sigma to 280°C.

As you can see, there are more differences between them, but the question is, if they are differences or just improvements? The Sigma is the best 3D printer according the 3DHubs users. Will Leapfrog  be the next, who will carry off the palm?

Testing of a special chamber for 3DGence One

Manufacturers of desktop 3D printers, trying to meet the requirements of industrial customers, ...

Zortrax starts a new decade with a strong cleaning of warehouses – the ...

For over seven years, there is no quarter of the month for us ...

Taiwanese XYZprinting – one of the leading manufacturers of 3D printers in the ...

In our articles describing work with the Spanish BCN3D Sigma R19 3D printer, ...