Right outside of the Brooklyn Navy Yard, a New York City industrial park that has become a staple for local manufacturing, is a modest studio occupied by Fleet Hower, a local product designer creating unique 3D puzzle. Hower started off his venture into  3D printing as an architecture student, eventually transitioning towards product design as his career progressed, mostly due to his fascination with digital geometry and 3D modeling.

The outcome of Hower’s design work was LOCKNESTERS, a unique 3D printed puzzle that emphasizes the geometric possibilities that 3D printing technology grants us.  With his first-ever 3D printer and 3D modeling prowess, the Brooklyn-based designer worked tirelessly to perfect the geometric form of his puzzles, constantly experimenting to ensure that the pieces all fit snugly together. Although Hower has moved into creating designer toys, the original idea for LOCKNESTERS stemmed from his past experience in architecture, his adoration for geometric design, and his eventual access to 3D printing technology, which enabled him to prototype and productize his idea into a reality.

“When I got my first 3D printer in 2013, there were a couple of ideas for what I wanted to do, one was that I wanted to be able to make a product that was actually consumer friendly in terms of finish and quality. But, before that, I was just fascinated with digital geometry and modeling,” Hower told me. “So I had this idea of the puzzle. If we’re working with these unconventional geometries, how do we reconcile them in the real world? Being an architect, I was thinking that this was a new type of brick, a new type of building block that would fir the contour of building. If you could generate 5,000 custom bricks that are all curved, how do you make sure that they all fit together.” 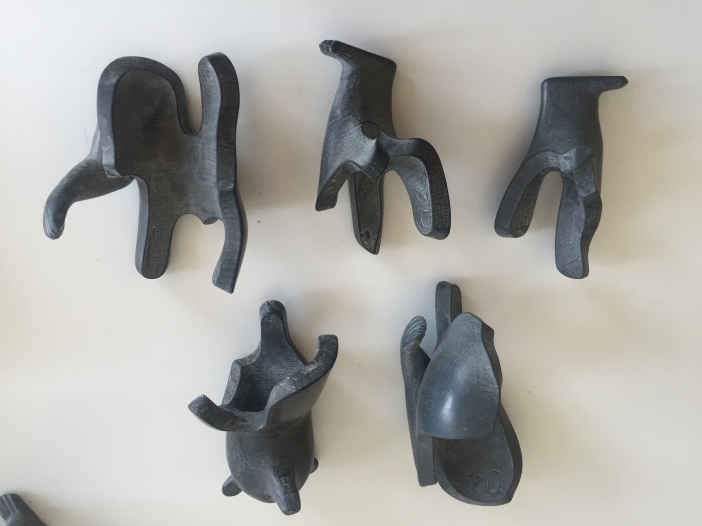 The current 3D puzzle being offered by Hower, the Bear puzzle, comes in five separate pieces, each of which fit snugly together to make a smooth bear sculpture. At the studio, Hower showed me that each piece was printed with supports in PLA material. That’s just the beginning of his product development, which follows with a sanding technique and multiple tumbling processes. Once the post-processing steps are complete, the 3D printed pieces suddenly take on a smooth and vividly patterned product, one that any 3D printing enthusiast familiar with PLA would be thrilled to touch. In order to keep his operations flowing smoothly and consistently, Hower generally keeps all of his steps going simultaneously.

“The finishing process is a multi-step deal. As you can see, the pieces have supports and are taken right off the printer. Then they get sanded down with a jewelers tool that I just put sandpaper on, I usually just sand down the supports there, but they’re still super raw,” Hower explained. “Then they get tumbled for about a day in water and a little ceramic, then I dry them and tumble them again in walnut shells, which basically softens them. When they come out of that they’ve got a nut residue on them, so I wash them off and buff them. They get the white coloration from the first tumbling step. It takes a while to go through the whole process, but I just keep all the stations running and you get consistent output on a daily basis.” 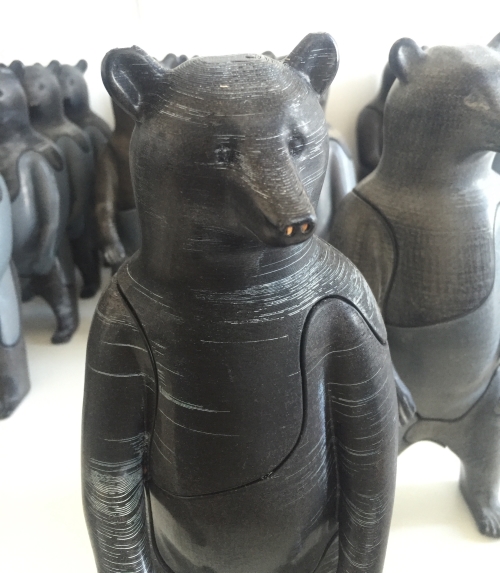 Still, 3D printing technology plays a hefty role in the LOCKNESTER development process, especially when Hower was just getting his project started. But, as time went on, the designer realized that he could optimize 3D printing by making it an integral part of a more wholesome process. Although he has working intesively to develop the design and finish for his 3D puzzles, Hower is still utilizing his first-ever 3D printer for production, a MakerBot Replicator 2 that he purchased back in 2013. In his studio, Hower has a handful of these Replicator 2s pumping out puzzle pieces at all times.

“One thing I’ve realized from this whole mixed process is, you know when you buy a 3D printer and print a product straight off the printer it’s rough, it’s like buying a piece of furniture that hasn’t even been sanded yet,” he explained to me. “I certainly need the printer to make this happen, but I also need to other processes that go along with it too. It’s probably about 25%-30% of the process. I ended up with a Rep 2 because it was 2013, and they were on the market. I still have my original one and it’s got like 6,000 print hours on it, I’ve rebuilt them so may times because they’re easy to rebuild, easy to get parts, and they’re just workhorses.” 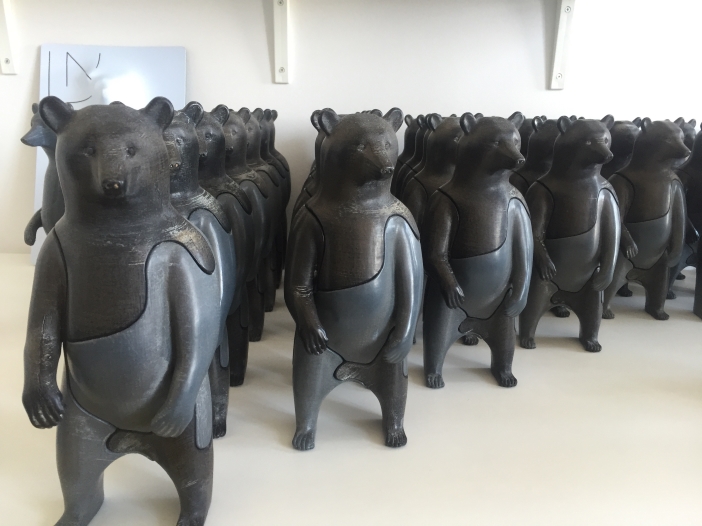 Fleet Hower has taken his time to ensure that every puzzle piece looks, feels, and fits together like it belongs on the shelf as a high-grade consumer product. Although the puzzles are all printed in PLA, the finishing process takes the material quality to the next level. For the designer, the key seems to be getting these 3D printed designer toys into the hands of his consumers, showing them the possibility of productization with a desktop 3D printer and standard PLA.

“Down the line, once this is clearly going to be something that is sustainable, I want to develop the dinosaur and dog, and even make a LOCKNESTER monster that’s its own strange creature,” Hower said. “I’ve had much more success when I get these right into peoples hands, I think when people just hear it’s a PLA they’re not sure if they want to pay money for it as a product or gift. But when they get it in their hands, they’ll see it for what it is.”

LOCKNESTERS are currently available for purchase directly through Hower’s website. Though the 5-piece bear is the only 3D puzzle currently available, the designer is already working towards redeveloping his dog and t-rex dinosaur, which are comprised of 27 and 21 pieces, respectively. All in all, Hower has taken an emerging tool mainly used for prototyping purposes, and has fit it into a process that churns out an innovative consumer product. With a fast production rate, pristine finish, and compelling packaging, these LOCKNESTERS might just be the highest quality product to come out of a desktop 3D printer.