Nowadays it is hard to find a debuting 3D printer on the market which can surprise you with innovative solutions applied in it. All of the novelties are mainly associated with eye-catching design or small adds which make your work easier. A start-up called LOCOOP from South Korea showed a fresh dimension delta 3D printers.

LOCOOP Y is a  „classical” 3D printer in delta type, with a difference, that a steering mechanism moving the arms is different from these, which are applied in another devices available on the market. In this construction it is used an original Delta mechanism, which is also used in the industry – for example in pharmaceutical factories.

An inspiration to create it were problems with 3D printers of Cartesian type.  The authors of the project used probably devices of poor quality characterised by unsatisfactory precision and moving layers during 3D print. They declare, that their machine can realise perfect models within even 48 hours. According to them delta 3D printers are more reliable and they offer bigger reproducibility. 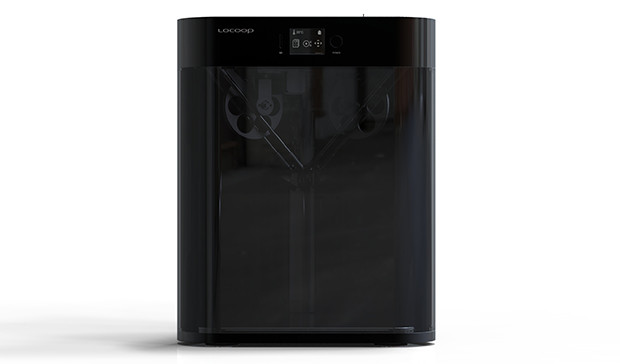 LOCOOP claims, that its 3D printer is the most precise and the most reliable machine which you can purchase for about 1500$. The creators decided to apply the original delta mechanism, what is not common in case of 3D printers. Instead of using classical arms steered by this mechanism, the engineers wanted to use 3 arms, each of them is steered independently, so the whole mechanism is less loaded and less exposed to exploitation, so thanks to it more precise.

According to its technical specification, it can print with 50 microns resolution on a working area of a diameter of 180 mm and height of 200 mm. A magnetic mounting of the arms with the nozzle enables to replace it within a few seconds. Moreover, the 3D printer is equipped with a touchscreen from which you can start your 3D print directly from SD card, calibrate a machine and level the working platform or activate cleaning of the machine.

The creators of LOCOOP Y started a campaign on INDIEGOGO. Within one day they collected over 50% of the pledged amount – 50 000$. Currently the cheapest option (890$) is sold out, so it is available for 990$, but is still 45% lower than a regular price. The campaign lasts one month.