IKEA is just fine! You can eat there tasty hot dogs and ice creams or buy cheap furniture. And if you choose a Lack table, or even better two, you can build your own 3D printer.

Lack is one of the most popular piece of furniture from IKEA. It’s a great basis for plenty of projects. I bought it 8 or 9 years ago, when I was a student. When I lived in dormitory it used to be my TV table. When I rented a flat, I attached small wheels to it, so it became a mobile table. When I bought my own flat, I put my 3D printer on it and now I placed it in the kitchen in my office.

Wayne Mason-Drust, one of the users of 3DHubs moved one step forward and build his own 3D printer from… two Lack tables. He was sharing the progress of his work on his profile and this topic aroused a lot of interest. 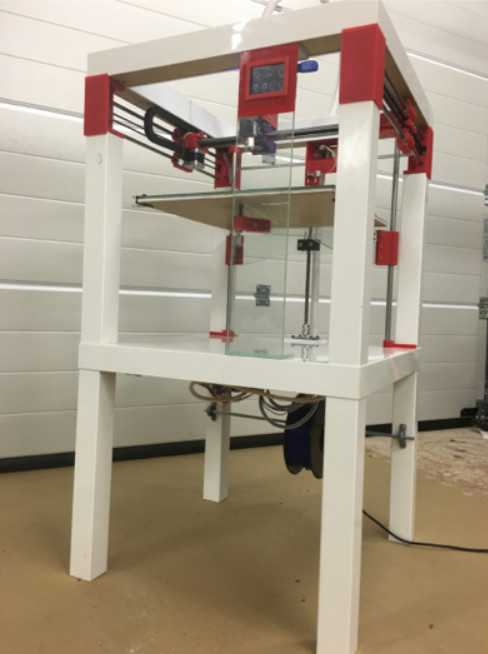 Normally it costs about 10 €, but sometimes you can find a special offer and purchase it at a reduced price of even 5 €. It’s one of the easiest models for self-assembly ever.  On the other hand, when you have ever touched it, you know that its nothing special and solid. So, is it a good basis for a construction of this type? It’s one of the most popular questions answered about the Wayne’s project. He wanted to resolve doubts of the commentators and presented 2 3D printed figurines of Marvin. One of them had a poor quality. The process took only 4 minutes (by the speed of  100 mm/s. Printing of the second one took about  40 minutes, by the speed of 50 mm/s and layer thickness of 0,1 mm.

The working area of the device is 340x310x300 mm. According to Wayne, he used a size 0.6 nozzle with an E3D Volcano HotEnd connected to a E3D Titan Extruder, along with an MKS SBase controller and MKS TFT using Smoothieware.

The main aim of the creator was to  build a “large-size” 3D printer up to 377$. Of course, for this amount of money, you can find kits for self-assemlby, but I’m sure, that a group of IKEA life hacks, will be excited with this project.

One year ago, Paweł described also a similar project, which was just a heated chamber. As you can see, Lack is an inspiration for creators and designers from all over the world. I guess, that’s not the last project, in which this table is a basis of construction of a 3D printer.