In the comments to a recent review of Dimafix – a special glue in the form of a spray, which improves adhesion of prints to the work plates of the FDM 3D printers, the user Blazz (once a well-known and respected member of the RepRap community dubbed BlazakoV) pointed out that our tests concerned only relatively small objects, and the glue may not provide similar results when 3D printing large models with ABS. Due to the fact that in the olden days Blazz (or rather BlazakoV) was an authority in matters related to budget 3D printing, we decided to meet his expectations, and test Dimafix also with large, challenging printouts. The additional tests were conducted again on Monkeyfab PRIME using the Z-ABS from Zortrax. Moreover, we conducted an additional experiment and used Dimafix on Zortrax M200 itself, equipped with a perforated table. Rather unexpectedly, our tests brought about another interesting conclusion regarding the Z-ABS itself…

Courtesy of our colleagues from 3D Element, who are our neighbours in the Technopark of Łódź, we were able to test Dimafix on their Zortrax M200. The 3D printer mainly uses dedicated, proprietary filaments, known as Z-ABS, Z-ULTRAT and recently also the Z-HIPS and Z-GLASS. The Z-ABS is characterized by relatively high shrinkage. While in the models with varied geometries the printouts usually are of pretty good quality, the models with a larger closed surface tend to shrink quite a lot – in extreme cases may even crack. In order to minimize the problem special, dedicated covers are placed over the 3D printer. Nevertheless, it does not solve all the problems… The Z-ULTRAT and Z-HIPS are much better suited for the purpose – unfortunately their price is much higher (140 PLN gross for Z-ABS vs 207 PLN gross for Z-ULTRAT, Z-HIPS and Z-GLASS).

Therefore, we decided to try Dimafix and see if it has any effect on the issue of unsticking / curl up of the edges of the prints. To perform the tests, we decided to print a cube of 7 x 7 x 7 cm with a hole cut inside it, 4.5 cm in diameter (the model can be downloaded here). The result we obtained was quite interesting…

The default settings of Zortrax’s software is to generate raft for each model, consisting of two layers: the first is a traditional raft with ribbed filling, which is pressed into the perforation of the table to provide good adhesion, and the second one is a homogeneous layer on which the model itself is printed, providing a smooth surface on the underside. Dimafix could therefore only provide increased adhesion of the first raft layer, having no effect on the model itself.

As you can see in the photos, the model suffered serious shrinkage and has cracks on the entire surface, virtually every half a centimeter. On the other hand – except for one corner which curled up after the print was completed, when build plate began to cool, the raft remained intact and never broke away from the plate.

Regardless of the above test, we printed two models on Monkeyfab PRIME, also using the Z-ABS (though in a different color and from a different batch than was tested on Zortrax). The first model was a plate with the dimensions of 15 x 15 x 0.3 cm, and the other one was the cube which we also tested on Zortrax. In the case of the plate, the 3D printing was unproblematic. The upper right corner was printed a little worse in the first layer, which was due to a minimal deviation of the table relative to the head, but other than that the whole print was perfect. At the end of the 3D printing, which lasted exactly three hours, the corner was a bit deformed (about 0.5 mm), but only in the fragment where the edge was not as perfectly laid on the plate as in other places.

An interesting thing happened after the work. When the plate cooled down to a temperature below 65ºC, the printout began to “shoot” and spontaneously detach from it. This is how the bottom plate looked like during this process:

When the temperature decreased even lower, while removing the print some fibers from the first layer the hapless corner were left on the plate. The printout itself was bent diagonally and formed an arch about 3 mm high.

The cube was the next model. The printing itself was uneventful, the substrate adhered to the plate perfectly, and in the end, when the temperature dropped to a little above 20 degrees Celcius, the printout was simply removed without the need for any force. What happened over the plate – with the printout itself, was a whole different issue. Just like on Zortrax, the Monkeyfab PRIME also produced a cube full of cracks, similarly – about every half a centimeter. The cracks appeared right in the course of 3D printing.

Both prints on PRIME were carried out with the head at the temperature of 260ºC and the plate at 100ºC. The speed of the first print was 60 mm/sec, the speed of the second was 75 mm/sec. In both cases, the printing took place in a closed room at a constant temperature (which does not matter, of course, as PRIME has a fully open structure anyway). 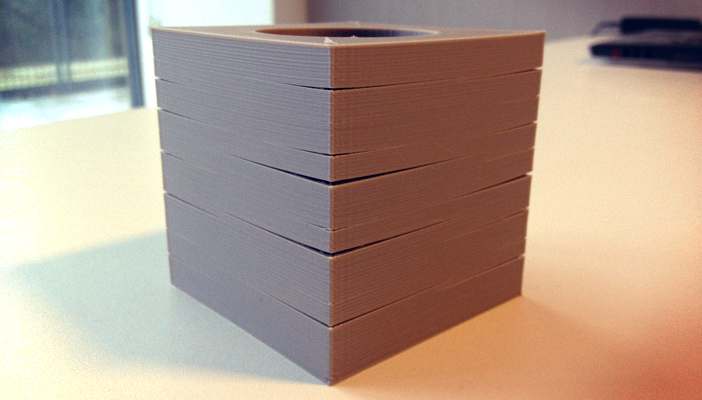 If something is good – it is good. Dimafix works well for large prints both on glass and the perforated plate. In the end it all boils down to the material and the machine we use to print. As demonstrated by the above tests, the problem we had with the Z-ABS was not the adhesion to the surface (which was solved with Dimafix), but the filament and the 3D printer on which it was printed. Unfortunately, the Z-ABS has such a high shrinkage that with certain models it is better just to give up, because the 3D printing on low-cost 3D printers with an open structure, either Zortrax M200 or Monkeyfab PRIME, will yield similarly bad results. There is a good reason why Zortrax introduced more expensive materials in their offer, including Z-ULTRAT and Z-HIPS, which are meant especially for more challenging models. The Z-ABS is perhaps the only such “Zortraxian PLA”…?

Cubes printed with PLA (colorFabb) and Z-ABS. Both prints made on Monkeyfab PRIME

On the other hand, it is worth noting that the model came out identical, printed on either Zortrax M200 worth 8700 PLN or on Monkeyfab PRIME worth 3690 PLN…

Printouts made by Monkeyfab PRIME and Zortrax M200 with Z-ABS